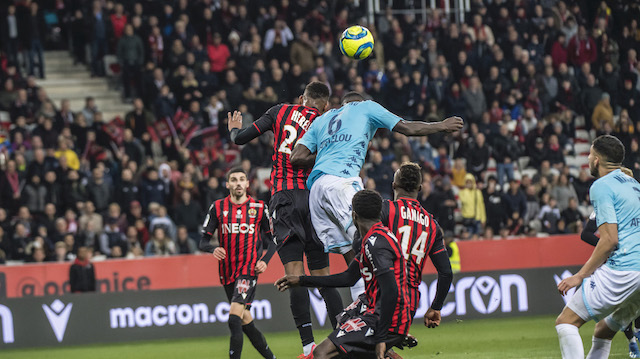 AS Monaco fell to OGC Nice on Saturday at the Allianz Riviera stadium due to a tie-breaking goal by Nice in overtime.
It was a last minute heartbreaker for AS Monaco on Saturday night as OGC Nice eeked past them with a Kasper Dolberg goal two minutes into overtime play.
The night started out with electricity in the air and the teams both were supercharged by it. Monaco had the first chance to score when Fabregas nicked the posts, but didn’t quite make it in. Not long after, Ben Yedder found Jovetic in the box, but the Montenegrin couldn’t quite make the conversion. Then Nice struck back with an attempt by Claude-Maurice, who was handily stopped by Glik.
The Red and Whites went on the attack, and Jovetic again had a chance to score, firing a gorgeous shot across the goal. Unfortunately for Monaco, Nice’s goalie Benetiz had a quick reaction and blocked the shot.
Only a few minutes later the same scenario played out, only this time it was on a shot by Bakayoko.
It was Wissam Ben Yedder who finally broke the stalemate at 32 minutes on a fantastic pass from teammate Bakayoko, the French International racing up the field with two defenders in pursuit. He outran them and out-manoeuvred Benetiz to open scoring.
This goal, Ben Yedder’s 18th of the season, put him equal to his all-time career scoring record for a season.
Jovetic had a clear shot just a few minutes later, but the ball bounced off the post. Adam Ounas then took possession and narrowly missed the goal, keeping Monaco in the lead at the break.
Nice came back from the break with a renewed energy. Clade-Maurice took a seriously powerful shot, but Lecomte was on it and stopped the ball in its tracks. At the hour mark, things took a turn. On a pass by Ounas, Kasper Dolberg made an outstanding header right between the bars, evening up the score and putting the pressure on the Red and Whites.
In the 86th minute, Jovetic was red carded for tackling Lusamba, showing just how high the spirits on-field had gotten. Golovin made one last-ditch regular play shot on goal that crashed into the underside of the bar.
In overtime, the final blow came when Dolberg broke away in front of the goal and made the winning shot for his team. In a sad end, AS Monaco lost 1-2.
Coach Moreno couldn’t hide his disappointment, not with his playesr, but for them.
“This defeat hurts after the match we played,” he said. “I think we deserved the win, not even a draw. We had a good match for 90 minutes. The second half was more balanced, but we had more chances than them, hitting the crossbar in particular. We are going to review all that we have done well this evening. If we always play like this, I’m sure we will win the upcoming matches. We are already thinking of winning the next meeting. My team has had one of its best matches since I have been here.”