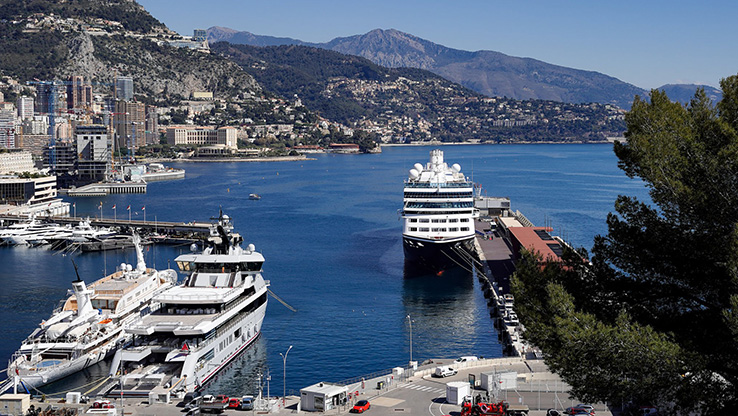 After a two-year hiatus due to the pandemic, an estimated 137 cruise ships will be coming to dock in Monaco in 2022, signalling a welcome boost to the tourism sector.

As an unfamiliar sight, the three cruise ships which came to Monaco recently probably did not go unnoticed by Monaco residents. Two years of absence has made these looming giants almost a spectacle in themselves, marking the start of what business owners hope to be a busy summer season ahead.

In all, 137 stopovers are being planned for this year, down only slightly from 2019 when there were 165. One reason for the strong comeback, says Tourist and Convention Authority Director Guy Antognelli, is that “The companies need to move the boats because they are very expensive immobilised at the quay.”

He indicated that 48 liners are expected between April and May, though not all is entirely smooth sailing. Health regulations on land have been dramatically reduced, but on many cruise liners, there are still quite a few regulations. Health passes and bubbles, words that seem from a not-so-distant nightmare, are still part of the general vernacular on these ships, which are trying to keep from shutting down operations again.

“Today the measures are being eased and the companies will gradually want to increase their reception capacity in particular,” says the director general of the Société d’Exploitation des Ports de Monaco (SEPM), Olivier Lavagna.

This is good news all around, though there will be a size limit imposed this year with ships larger than 250 metres not being accommodated quayside. Whilst it may sound restrictive, it is simply in order to target customers in the luxury and premium categories.

The decision is also practical, as according to Guy Antognelli, “There are fewer passengers on these boats, around 600 for luxury for example. It is not at all the same type of clientele as in the contemporary category, but there is also a logistical aspect to take into account since Port Hercule is not equipped to receive boats of 6,000 passengers. Not to mention that this does not correspond to the image of what Monaco wants.”

The question has always been whether these clients are beneficial to the Principality.

“In 2014, we did a study which told us that 99% of passengers got off during the stopover, 12% of them took organised excursions, often outside Monaco, while the rest, almost 88%, remained in Monaco. They walked around alone and are not identifiable as cruise passengers and mixed in with other visitors,” explains the Director of Tourism and Conventions. “At the time, the average expenditure was €115 per single passenger, with a range going from €50 for the passenger from the boats that remain four hours at the quay, up to more than €1,000 for the passenger from the luxury cruises that begin or end in Monaco.”

Others are more sceptical of what these tourists bring. They cannot be counted on to help struggling businesses up on the Rock, for example. This situation will be tackled by merchants there to lure potential clientele through rediscovering this overlooked part of the country.

Despite some hiccups, Antognelli does not hide his optimism for this year. “This is the first time in a long time that all the hotels are so early filling up for the Grand Prix and the ePrix, it is a very good sign. Likewise for the high season, the signals are positive, particularly for American and Middle Eastern customers. We must continue to diversify our customer base.”

This base, no doubt, will need to include the returning cruise ship passengers, who could help make or break the upcoming summer season.