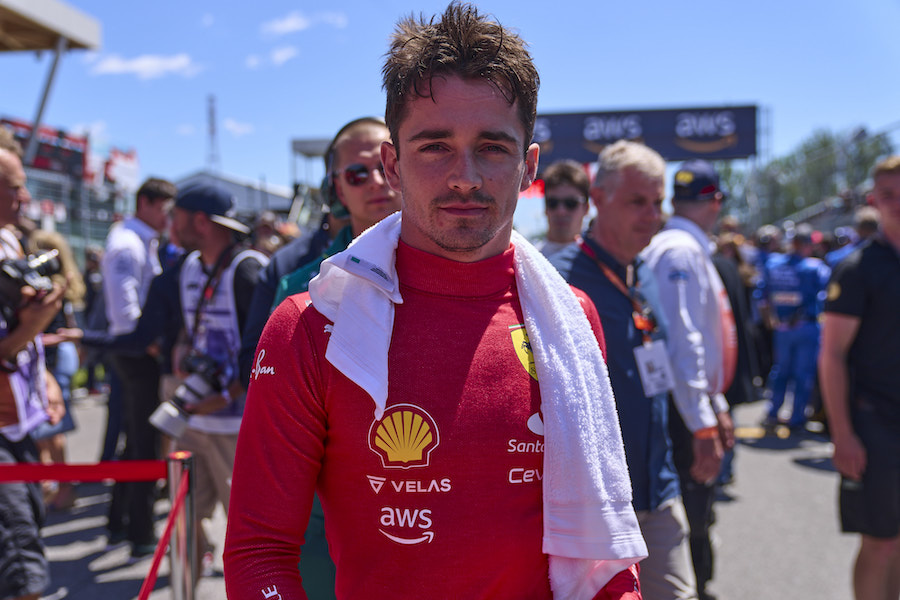 Charles Leclerc charged from the back of the grid at Sunday’s Canada Grand Prix, making up 14 places to secure a deserved fifth position, whilst Max Verstappen extended his championship lead.

This weekend’s event was essentially an exercise in damage limitation for the Monégasque driver. Leclerc’s torrid run of bad luck began with a mechanical failure, continued with a costly strategic error at his home GP in Monaco, before another mechanical failure in Azerbaijan last weekend.

When it rains, it pours; In a rain-drenched Montréal, another change to the power unit of Leclerc’s Ferrari meant that he has exceeded his quota for the year, thus incurring a grid penalty, which would see him dropped to the back of the grid.

A penalty for Yuki Tsunoda ultimately meant that Leclerc would start from 19th, but with a lot of work to do. To add insult to injury, Leclerc’s major title challenger Verstappen claimed pole, ahead of Fernando Alonso, who was starting on the front row of the grid for the first time in a decade. In the other Ferrari, Carlos Sainz could only manage third in a tricky, wet qualifying session on Saturday.

It was a weekend of pathetic fallacy for Leclerc as the changing meteorological conditions perfectly demarcated his change in fortunes. If the rain encapsulated Leclerc’s mood on Saturday, then the sunny skies on Sunday were an unmistakably positive sign.

The race got underway without incident as the car led line astern with little contact and few place changes. George Russell was the main benefactor as he jumped from 8th to 6th before overtaking Kevin Magnussen on lap five to move up to fifth and just behind team-mate Lewis Hamilton.

Sainz, in the far superior car, overtook Alonso with a simple DRS move on lap three, but the tyres of the Ferrari, which has struggled with tyre management issues throughout the season, were already beginning to grain. Leclerc, meanwhile, was quietly going about salvaging some points as he picked his way through the backmarkers.

Before his first pit stop, Leclerc had fought his way up to seventh, but he once again had to fight his way through the field after he came out behind Daniel Ricciardo, Yuki Tsunoda and Guanyu Zhou.

A late safety car, brought out by a comical crash from Tsunoda who, coming out of the pit lane went straight into the barriers, spelt danger for Verstappen. The reigning world champion was on older tyres to Sainz, who was right behind and chasing the victory.

However, despite being within a second for the remaining 16 laps of the race, Sainz simply couldn’t get past the Red Bull, who had the straight line speed to keep out of the clutches of the Ferrari.

Verstappen took the chequered flag to extend his championship lead over Leclerc to 49 points. Sainz took second, whilst Hamilton rounded off the podium. Russell continued his impressive run finishing fourth; the Brit is still the only driver on the grid to have finished in the top five in each race this season.

Driver of the day, Leclerc reached fifth and secured some valuable points in the championship battle. Thanks to Perez’ retirement, he closed the gap to the Mexican to just three points.

“I gave it my all,” said Leclerc post-race. “It never feels good to finish in P5, but considering where we started and the way the race unfolded, it was the best result we could bring home today.”

Next up is the British Grand Prix, where Leclerc scored his best result of the 2021 season, securing second but agonisingly missing out on the win late-on. “I’m looking forward to Silverstone now. It’s one of my favourite circuits on the calendar and hopefully we can score some big points there,” said Leclerc.

For the sake of his title challenge, he will have to.

Local News Cassandra Tanti - August 2, 2021
The Monaco Yacht Summit will return to Monaco this September, bringing some of the best yachting experts to share valuable insights with potential yacht owners and charter clients.

On the sidelines of the recent UN conference on oceans and the law of the sea, the Monaco Permanent Mission in New York organised an event for French-speaking legal advisers.

Professor Mathias Forteau, from the University of Paris-Nanterre, presented a work entitled "Treatise of International Law of the Sea". This book, which offers an exhaustive view of maritime law, as contained in the United Nations Convention on the Law of the Sea of 1982, is an indispensable working tool for students and practitioners of the international law of the sea.

Annick de Marffy-Mantuano, President of the Scientific Council of the Institute of Economic Law of the Sea (INDEMER), presented the work of this Institute, created in the Principality in 1985. She emphasised the importance of an integrated approach between the legal, economic, environmental and political domains.

The discussions during this meeting on December 6 highlighted the importance of promoting legal publications in French. Collaboration with the Permanent Representation of the International Organisation of Francophonie, in New York, is already envisaged on the same topic next year.