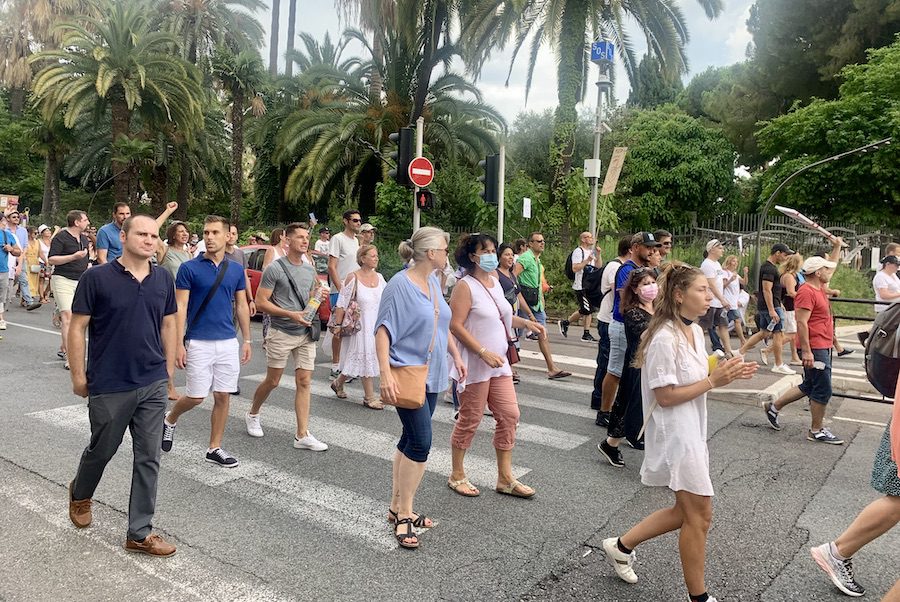 On Saturday 4th September, Monaco’s anti-health pass protestors are hoping to hold their first demonstration in the Principality.
After several weeks of making their voices heard on social media as well as at demonstrations in Nice, the group ‘Peaceful demonstration against the health pass in Monaco’ (Manifestation pacifique contre le pass sanitaire à Monaco) has organised its first gathering in Monaco for Saturday on the Place des Moulins at 2pm.
The group, now with around 4,000 members on Facebook, is not only opposed to the health pass, but also to being vaccinated, saying, “What can the health pass be used for today? Collective immunity to vaccines is unachievable. Vaccinated and unvaccinated have almost the same viral load. Regarding the vaccination obligation, today caregivers, tomorrow for all employees, and ultimately the entire population, including children? There is an emergency, let’s take our destiny in hand. Let’s mobilize now, tomorrow it will be too late.”
The organisers sent three requests for demonstrations to the head of Monaco’s Public Security, Richard Marangoni, for 4th and 11th September at 2pm, and on 9th September at 3:30pm, all at Place des Moulins. The requests have not yet been approved.
Protests of this size would be firsts in the Principality, and the government says it is taking into consideration “the preservation of public order, changes in the health situation or the programming of economic, sporting, cultural or recreational events,” according to Minister of the Interior Patrice Cellario.
In order to prevent the event from turning into a free-for-all, and to allay government fears, the organisers have created a “code of conduct” for protestors to follow. The rules include “No reference to the Prince or to the Princely family. No defamatory messages. No anti-Semitic or racist messages, for example, no yellow star. No vulgar messages. No incitements to hatred. No anti-vax messages such as ‘My body, my rights’ or ‘Vaccine = poison’.”
Additionally, they have brought in security services to supervise and a medical team in case of emergencies.
“We raised a lot of inconsistencies about the health pass, but it was not much heard. Our arguments were not heard,” said Sharon Rochetin, founder of the Facebook group and a local shopkeeper. “We wasted a lot of time in sterile discussions. Time, we don’t have any more. The only way to be heard, it is the action, it is to demonstrate!
“We will protest against the health pass, of course, but also against the vaccination obligation,” Sharon Rochetin continued, clarifying the group’s stance. “It is not against vaccination. In the demonstration, there will be people going who are vaccinated. We are for choice.”


Photo of the anti-health pass protest in Nice, by Monaco Life