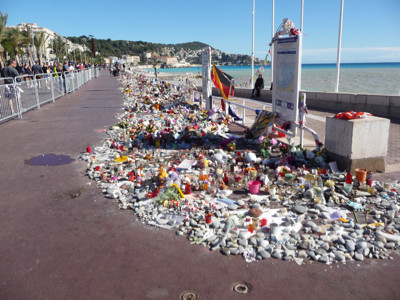 The city of Nice has prepared a major commemoration on Friday, July 14, to honour the victims of last year’s horrific Bastille Day atrocity on the Promenade des Anglais.

Between 9 am and 6 pm, 12,000 blue, white and red plaques will be distributed to the public on Quai des Etats-Unis. The immense message made up by the individual plaques will be filmed by a drone and shown on screens at around 8 pm.

A military parade will take place on Place Masséna, in the presence of 2,000 guests, from 4:30-6:30 pm. In the air, the Patrouille de France will also pay tribute to the victims, to the security forces, doctors and nurses and all the professionals who mobilised 12 months ago in the wake of the attack, which took the lives of 86 people.

President Macron is expected to join the Mayor of Nice, Christian Estrosi, during the ceremonies.

In the evening, the Promenade des Anglais will be the focal point of events, with the showing of the film “Himalaya”, the reading of texts by eight actors, a concert by the Nice Philharmonic Orchestra and the Choir de l’Opéra. A fireworks display and a concert that will end with the Marseillaise and an ultimate Nissa la Bella. Eighty-six giant light beams, one for each of the victims, will shine out over the Bay.

At 10:45 pm, the public will disperse to the sound of Pachelbel’s Canon.

Major road diversions are planned during the day.

Charity run for Nice victim, 13, and why we can’t forget

Local News Staff Writer - February 11, 2019
The National Councillors went back in time with a visit to the Museum of Prehistoric Anthropology of Monaco.

Local News Staff Writer - January 28, 2017
It’s been an energising couple of weeks for car enthusiasts in the Principality, between the Monte-Carlo Rally (January 16-22) and the weeklong Rallye Monte-Carlo Historique, which finishes in Monaco on February 1. Tomorrow, the revving continues as Cars & Coffee Monaco meet at 10 am in front of the Opéra de Monte-Carlo. The "easy-going" event is open to car enthusiasts with "a car a bit special". A morning of driving will be followed by a lunch at 1 pm at the Café de Paris. The €70 menu includes a starter, main course, water, coffee and parking. Space is limited so confirm entry ASAP to carsandcoffeemonaco@gmail.com Cars & Coffee Monaco, which is part of an official global community, meets monthly. For more see Facebook. [video width="640" height="640" mp4="https://monacolife.net/wp-content/uploads/2017/01/carsandcoffe.mp4" poster="https://monacolife.net/wp-content/uploads/2017/01/coffeecars3-4.jpg"][/video]