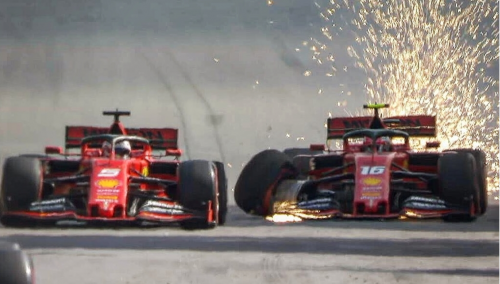 Team Ferrari suffered a major set-back at the Brazilian Grand Prix on Sunday when, with a mere six laps to go, Charles Leclerc and Sebastian Vettel sensationally collided, ending the race for both.

Though the Grand Prix season is nearing its end with only one more race to go and Lewis Hamilton the undisputed champ, the drama is hardly at an end.

The Brazilian Grand Prix in Interlagos was a show-stopper, with Max Verstappen’s less-than-nail-biting win being overshadowed by Vettel and Leclerc colossally imploding whilst vying for fourth place.

The teammates have been fiercely competing all season and have had a number of high-profile run ins, all culminating in this disastrous crash that left them both out of the running.

Whatever happened, happened. I won’t comment the crash, but very happy for you my friend. You deserve all of this, the 1st podium is always special and we both dreamt of that moment since racing in karting together, you’re the best, enjoy today @pierregasly ?: @kymillman

Leclerc started the race in 14th but by lap 66 had passed Vettel for fourth place. Vettel came back and they had a small crash, but it was enough to leave Vettel with a puncture and Leclerc without suspension. Both seem happy to lay blame at the other’s doorstep.

“Seb went around the outside but I left the space and then he squeezed me to the inside,” said Leclerc to The Guardian. Vettel lashed back that he “didn’t have space on the right and tried to pass.”

A big mess all around.

The Ferrari debrief session was no doubt unpleasant for both pilots, though diplomatic Ferrari boss Mattia Binotto restrained himself from placing blame publicly on either man at this point.

The final race of the season will be held on Sunday 1st December at the Yas Marina Circuit in Abu Dhabi.