Decrypting the uncertainties of the world economy

Decrypting the uncertainties of the world economy 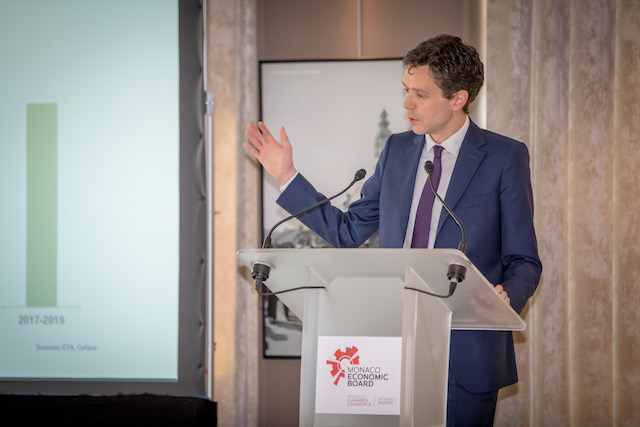 Entrepreneurs in Monaco have heard that, while the current coronavirus epidemic is having immediate consequences, there are many other factors to consider when planning for the future.
Coface’s chief economist Julien Marcilly recently gave a conference for the 7th consecutive year to MEB members, organised in partnership with the Banque Populaire Méditerranée and Gramaglia. The event took place in front of more than 100 entrepreneurs eager for economic information in these times of uncertainty, in particular for companies linked to international markets.


Julien Marcilly outlined the various challenges facing global economic exchanges, starting with the coronavirus – although, as he said, “two months ago we did not think that a health crisis would be the main risk today”.
The upheavals, he said, are very real: a supply shock due to the cessation of Chinese production, as well as a demand shock caused by the spread of the virus. These have repercussions which affects the whole economy, provoking a general shock of confidence. As a result, global growth forecasts by Coface are revised downward by half a point, provided that the peak of the coronavirus is in the second quarter.
Another subject that was addressed by Marcilly was the somewhat eclipsed but nonetheless impactful rise of protectionism. The most obvious is the current trade war between the Americans and the Chinese, but there are others. In fact, the measures taken by the two giants represent only a quarter of the total worldwide. This is a fundamental trend, says Marcilly, which has repercussions on trade. But the effects are not always those imagined: regarding the American trade deficit, the decline of China as a supplier was mainly offset by an increase in imports from Mexico and Vietnam.

Meanwhile, Marcilly pointed to an atypical cycle where unemployment remains generally low however rates are not going up – favourable real estate and construction conditions where the liquidity risk which led to the 2008 crisis is not a priori to be feared. However, the repercussions of this situation he says would really benefit only the wealthiest households, as the weakest do not necessarily have access to property.
Still, according to the economist, services and players linked to tourism are suffering a dead loss in this period of uncertainty and sectors such as the automobile, metallurgy and textiles are facing longer-term challenges and will have to adapt to new data.