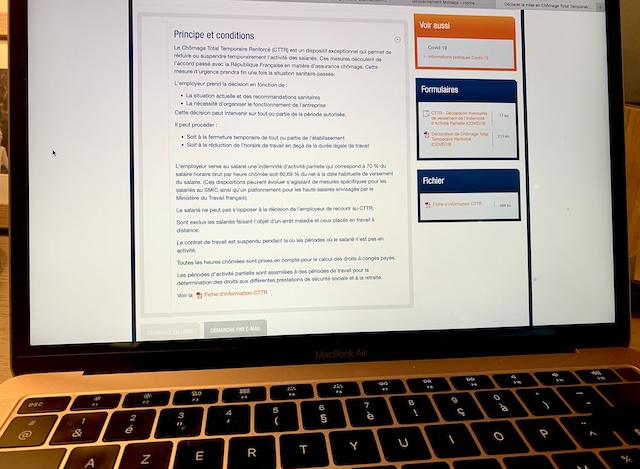 Companies in the Principality who wish to apply for Reinforced Total Temporary Unemployment (CTTR) for their employees can now carry out the procedures online.

The government has made it easier for businesses to complete the CTTR process. They can now apply for authorisation from CCTR and submit their monthly declarations for the supplement payment for partial activity compensation, online.

The CTTR has been instated to allow companies to temporarily reduce or suspend the activity of employees – a measure that will end once the health situation has passed.

Blue Economy on board Brazilian ship

André de Montigny, Honorary Consul of Brazil in Monaco; Michael Lodge, Secretary General of the International Seabed Authority; Luciana de Montigny, President of Brasil Monaco Project; Raphael Cuvelier, Secretary General of the Prince Albert II of Monaco Foundation; and Olivier Dufourneaud, Director of the Oceanographic Institute.Photo: Brasil Monaco Project/Philippe Fitte[/caption] The Brasil Monaco Project (BMP) helped organise the “Blue Economy” event, which took place on Monday, April 24, aboard the Brazilian offshore supply ship, Vital de Oliveira, moored in Monaco for the International Hydrographic Organisation’s first Assembly. BMP’s participation was one of many activities over the last five years between Brazil and the Principality, as requested by its President of Honour, Prince Albert. Ms Luciana de Montigny, President of Brasil-Monaco Project and her husband, André de Montigny, Honorary Consul of Brazil in Monaco, work closely with the Prince Albert II of Monaco Foundation, represented by Raphael Cuvelier, as well as Olivier Dufourneaud of the Oceanographic Institute, the President of Monaco Brazil Invest Association, Marcos Pileggi, and Wald Filho, Consul of Monaco in Brazil. In addition, Justin Highman of the Monaco Economic Board also works to stengthen the ties between the two countries. The "Blue Economy" conference is an example of the various activities carried out by the Brasil-Monaco Project, which is also actively participating in the project to install a miniature reproduction of the Prince’s Palace in a park in Gramado in Brazil, a tribute to the Principality and a way of illustrating the strong ties between the two countries. Brasil Monaco Project is also working on the creation of a "Grimaldi Dynasty"-themed parade, which could be presented at the Rio de Janeiro 2019 Carnival, the annual event anticipated by millions of Brazilians and rebroadcast across the world.

Home values in the Principality rose to a record €41,420 per square metre last year after increasing 15 percent since 2015, according to the Government’s statistics office. The strong year followed a slight decline in prices from 2014 to 2015, after a steady growth period from 2012. The strong price rise eclipses other top-end property markets. The current price is more than twice the price of Manhattan co-op and condo properties, and almost twice the value of a luxury home in London. The high end of the Monaco market appears to be strongest. Nearly half of the 33 new homes bought in Monaco in 2016 sold for €10 million or more.