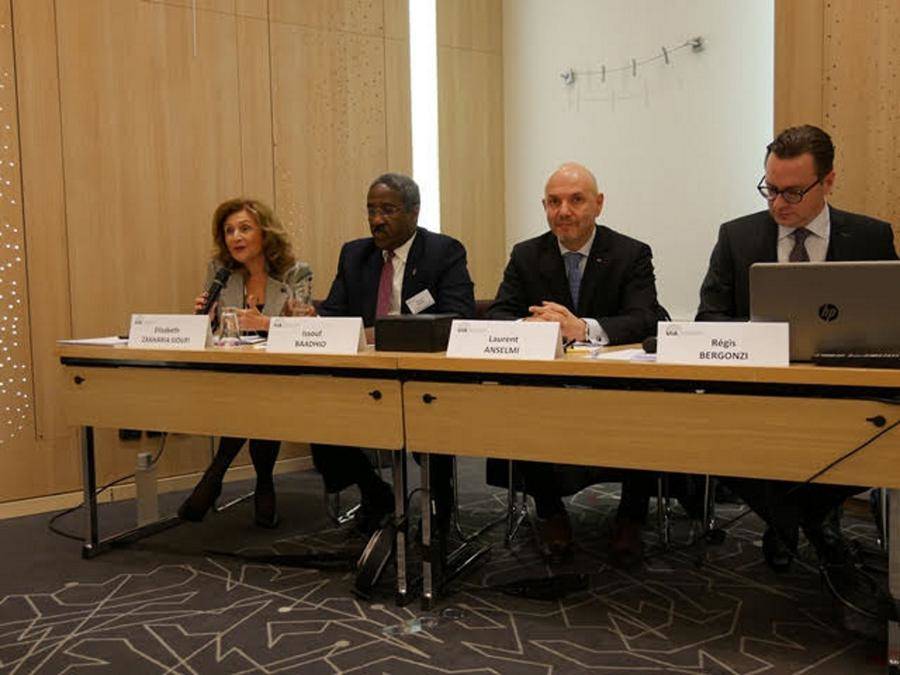 Mr. Laurent Anselmi, Director of Judicial Services, recently took part in the opening of a seminar of the International Union of Lawyers (UIA) on the theme of “The importance of the European Court of Human Rights”.

The Director appeared alongside Bâtonnier Issouf Baadhio (Burkina Faso), President of the UIA and Me Régis Bergonzi, of the Monaco Bar, UIA representative to the Council of Europe and organiser of the event.

In his address, Mr. Anselmi focused on presenting the Monegasque judicial institution as a pivot of the rule of law, recalling that the Principality, in 1911, created the Supreme Court, the first truly constitutional jurisdiction in the world.

Referring to the difficulty and the sensitivity of the profession, he stressed that the lawyer is an essential player in the judicial process.

The Director also paid tribute to the memory of Mario Lana, lawyer at the Rome Bar, who disappeared three years ago and whose son, Anton Giulio Lana, member of the UIA, was present.

A historic and indefatigable promoter of human rights, Mr. Lana has notably distinguished himself in the “defence of the defence”, namely that of the lawyers unjustly persecuted or deprived of freedom because of their action in the service of the justice and law.

In a French-speaking but very cosmopolitan audience from all over Europe, the Maghreb and the Middle East, there was also the presence, during this opening session, of Brigitte Gamba-Gambarini, First President of the Court of Appeal, Sylvie Petit-Leclair, Attorney General, Françoise Carracha and Claire Gillois-Ghera, Counselors at the Court of Appeal, joined during the day, by Mrs. Françoise Barbier-Chassaing, President of the Court of First Instance, as well as members of the Bar of Monaco including the Bâtonniers Jean-Charles Gardetto and Alexis Marquet.

The Director then took part in the first part of the seminar devoted to the protection of the right to respect for property by the European Court of Human Rights, by presenting, in the framework of exchanges, a point of Monegasque legal view.