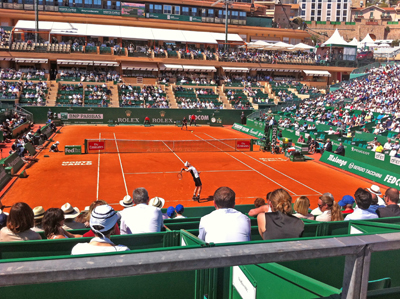 Keen to avoid a second loss to the German at ATP Masters 1000 level this year, Novak Djokovic had to work hard for his 850th tour-level win on Court Rainier III, beating Philipp Kohlschreiber of Germany 6-3, 4-6, 6-4 in two hours and 36 minutes. Djokovic saved 12 of 16 break points to improve to 9-2 in his FedEx ATP Head2Head series against Kohlschreiber.

“I had ups and downs and in a way felt a bit rusty on the court. I had a tough opponent of course,” Djokovic said at a press conference. “Philipp beat me in Indian Wells. It was a match that happened less than a month ago, so of course it was in the back of my mind a bit.”

“I thought I should have maybe stepped in and played a bit more aggressive in the second set, but credit to him for mixing up the pace and playing well.”

“I’ll take this win. Hopefully I can play slightly better in the next round, because if I want to go deep in the tournament, I definitely have to up my game.”

Djokovic is attempting to claim his third title at the Monte-Carlo Country Club this week. The 31-year-old has reached four championship matches at this event, lifting the trophy in 2013 (d. Nadal) and 2015 (d. Berdych).

The top seed was put under pressure early in the opening set, but found the corners and benefitted from a mid-court Kohlschreiber forehand error to escape from 15/40 down at 2-2 and 3-3. Djokovic claimed the only break of the set at 4-3 with consistent depth from the baseline, extracting errors from his opponent before serving out the opener to love after 45 minutes.

Neither man was able to find comfort on serve in the second set, with seven consecutive games being won by the returning player. Djokovic recovered from a break down on three occasions to serve at 4-5, but was broken for the fourth time in a row after a series of forehand errors.

“In a way it’s good I got to spend two-and-a-half hours on the court in my first opening match in the clay court season,” said Djokovic. “This surface is very demanding physically.

“Tactically, as well, you have to construct the point, be more patient [and] put more spin into the ball… I think from the positive side, it’s actually good that I got to have that much match play, because I did play a lot of practice sets and so forth, but it’s just completely different [to] when you are nervous and playing an official match.”

In the third round, Djokovic will meet American Taylor Fritz or Diego Schwartzman. Fritz was leading Jo-Wilfried Tsonga 6-4, 2-0 on Court Rainier III when the Frenchman was forced to retire.