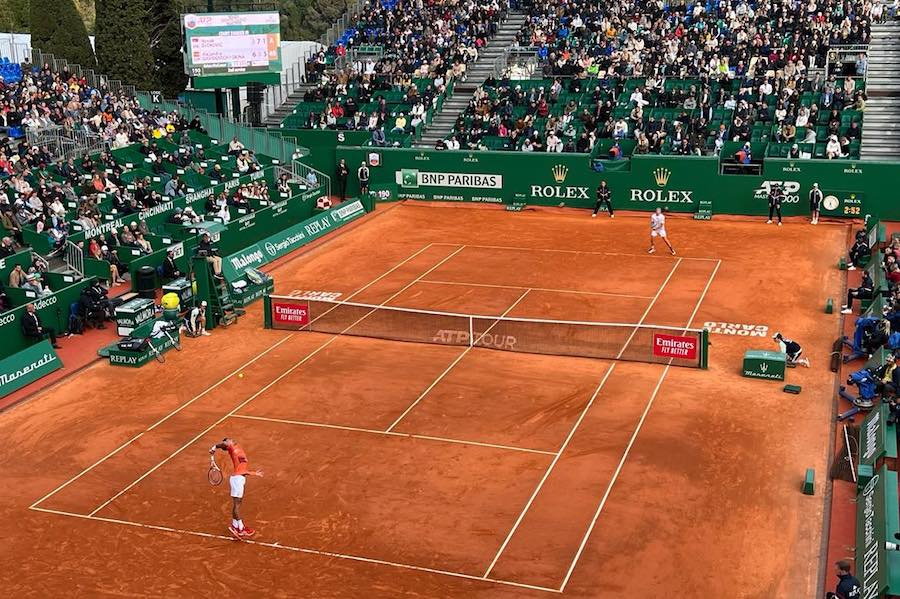 The scores of spectators who flocked to the blustery Monte-Carlo Country Club on Tuesday witnessed the shock of the tournament as Novak Djokovic was knocked out, whilst Monaco players’ woes continued. Here’s a round up of the highlights of days three and four of the Monte-Carlo Rolex Masters.

In a tournament that has so far been defined by shock exits, the greatest scalp of them all was pulled off by Alejandro Davidovich Fokina on the main court on Tuesday evening. Starved of court-time since his high-profile, high-drama deportation from Australia in January, Novak Djokovic’s lack of action showed.

Fokina, a clay court specialist ranked 46th in the world, began at a blistering pace and never relented. Breaking the world number 1 twice early-on, he expertly managed the remainder of the set to take a surprise lead.

Coming into the second set, there was no let up from Fokina, who continued to pile the pressure on Djokovic, breaking him on his first service game. He may be short of match practice, but certainly not short of experience and the Serb all so often prevails in the big moments. He soon broke back before the two shared breaks of serve before a tie-break.

Djokovic prevailed (7-5) to take the match to a deciding set, prompting a moment of spontaneous passion as he roared at the crowd, throwing up his arms in an attempt to jee them up. Truthfully, the gesture wasn’t for the crowd, but rather for himself, as he tried to restart a motor that hasn’t really got going since his infamous misadventure Down Under.

That stuttering motor ran out of fuel in the third set. As emphatic and impressive as Fokina was, it was clear that Djokovic was spent, ultimately losing 6-3, 6-7, 6-1.

A dejected Djokovic admitted to Monaco Life post-match that, on the day, his opponent was too strong for him. “He could have won this match in straight sets,” the Serbian began. “I just kind of fought my way through the third, but then I physically completely collapsed, I couldn’t move any more.”

A premature end to Djokvic’s tournament means he now sets his sights on the French Open slightly earlier than he would have expected. “I’m not going to stop here, I’m going to keep going and hopefully build my form for Roland Garros. That’s the big goal of the clay season.”

In one of the tensest matches of the tournament thus far, home favourite Lucas Catarina, ranked 430th, was cruelly foiled in his attempt to pull off an unlikely upset on Tuesday. An inferior ranking relative to his American opponent Taylor Fritz (ranked 13th) didn’t deter the Monegasque player, who went on the attack from the off.

He immediately broke Fritz in the first game, and went on to take the game to the American, his aggression and energy went unmatched, and spectators could have been fooled into imagining that it was in fact Catarina who had the far superior ranking.

A double-fault from Catarina gave his opponent a route back into the set, as the two entered into a tie-break. Fritz looked to have sealed the set, but with three set points, Catarina fought back to shock his opponent and take a surprise advantage heading into the second set.

Fritz fought back immediately, breaking Catarina in the first set. In each moment of hardship for Catarina, there was a feeling that Fritz would simply run away with it, but that never happened, and Catarina broke back. Just like in the first, the second set went to a tie-break. This one controversially went the way of the American, a late let call deprived Catarina of an already won point, and Fritz took full advantage to draw level.

It felt as though the chance of causing an upset had slipped away from Catarina, a feeling that was only exacerbated by the doctor, who frequented Catarina’s bench as he struggled with a thigh issue.

His body may have been failing him, but his competitive spirit remained intact as he broke Fritz in the opening game of the third set. When Fritz broke back midway through the third set momentum was finally on the side of the American.

In the closing stages, the tension in the Court des Princes could have been cut with a knife, but it was the American who prevailed, breaking his opponent one final time, as a Catarina double fault unsatisfyingly decided the game. (6-7, 7-6, 6-4). A valiant effort from Catarina, who had almost been written off pre-match, and whose performance perhaps meritted more.

Catarina was torn between pride and disappointment following the emotionally and physically demanding battle. “I am more disappointed than happy with my performance because I lost. Maybe later when I’m calmer, I’ll tell myself that a player ranked 430th in the world could hold his own against someone ranked 13th.”

Monegasque involvement in the tournament was definitively ended just hours later. Hugo Nys, who lost against Jaume Munar on Saturday, and Romain Arneodo lost in a doubles thriller to Diego Schwartzman and Dan Evans (6-4, 5-7, 10-12). A day of Monegasque disappointment that was defined by ultra-fine margins, and could so easily have gone the other way, in both matches.

Dreams of a fairytale farewell for Jo-Wilfried Tsonga, who was playing in his final ever Monte-Carlo Masters, were dashed by the experienced Marin Cilic on Monday (2-6, 2-6). The Frenchman announced his retirement last week, and will end his career at the French Open, which begins in Paris next month.

Stan Wawrinka befell a similar fate. The Swiss player is making his return following a lengthy injury lay-off, and didn’t have enough to beat Kazakh Alexander Bublik, who won in three sets (6-3, 5-7, 2-6).

Former Monte-Carlo Masters winner and three-time grand slam winner Wawrinka, was nonetheless pleased with his comeback, having been sidelined for 13 months with injury. “I knew coming here that I’m not physically and tennis-wise ready. I think it was much better than I was expecting today.”

With big names falling by the wayside at an alarming rate, those left in will be licking their lips at the thought of winning the first title of the clay court season. Stefanos Tsitsipas was emphatic on Tuesday night, brushing aside Fabio Fognini in straight sets (3-6, 0-6), whilst Alexander Zverev, Brit Cameron Norrie and a handful of other hopefuls are already in the round of 32 and will be in action on Wednesday. None of them need extra motivation, but Djokovic’s exit will have raised rivals’ eyebrows, and could also raise their games,with the competition thrown wide open.

See highlights of the game in our Instagram videos below…