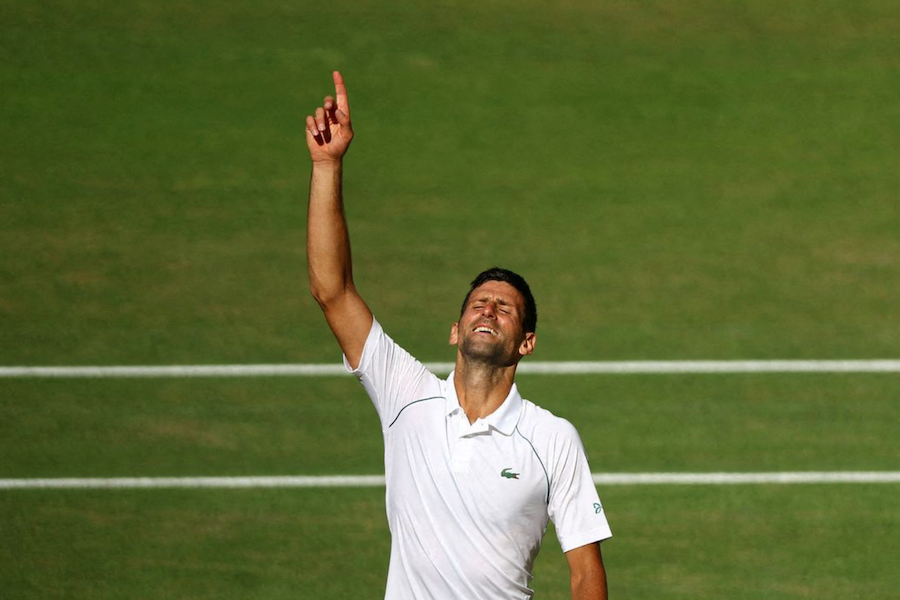 In beating the Australian, who was competing in his first grand slam final, Djokovic also moves to within just one Wimbledon title of Roger Federer’s record eight titles on the iconic grass court.

Kyrgios looked at ease on Centre Court as he pulled off some of his trademark audacious shots on his way to winning the first set. However, the Serbian had experience to lean on and he quickly took the ascendancy in the second set.

Whilst he looked a shadow of himself during the clay court season, especially at the Monte-Carlo Masters in April where he suffered a shock first round defeat to Alejandro Davidovich Fokina, Djokovic looked at home on the Wimbledon grass.

In the hunt for his fourth consecutive title at SW19, Djokovic was calmness personified, a stark contrast to Kyrgios who began to rant at his box as the match slipped away from him. Djokovic broke his opponent in the ninth game to take the third set and to within just one set of another Wimbledon title.

Both players managed to hold their serve in the fourth set, sending the match to a tie-break. Djokovic forced Kyrgios into multiple mistakes on his way to a 7-3 victory, which tied up a seventh title and leaves the Serb unbeaten at Wimbledon since 2017.

The two tempestuous characters were full of praise for each other during the on-court interviews. An enthralling final in front of a capacity 15,000 crowd consigned their previously strained relationship to the past, giving way to a “bromance” in the words of Djokovic.

With the waning of the old guard, new challengers are emerging. Kyrgios was the latest to attempt to dethrone the imperious Djokovic, and his failure to do so leaves the Serbian on the verge of tennis history. Few look capable of denying Djokovic a wealth of titles in the coming months, as history looks set to be re-written.