Dream night for Groupe Élite in the ‘Theatre of Football’

Dream night for Groupe Élite in the ‘Theatre of Football’ 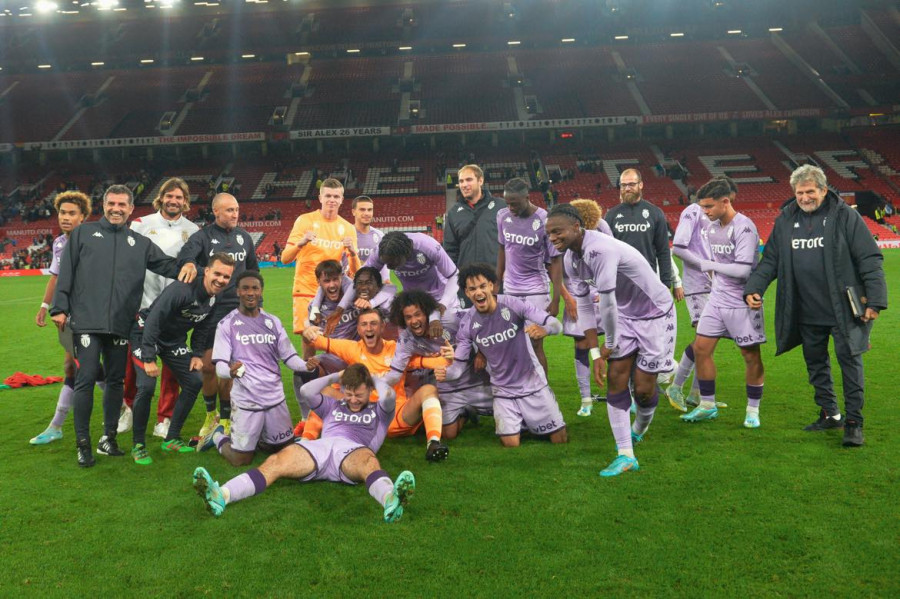 AS Monaco’s Groupe Élite secured a deserved 2-0 victory against Manchester United at Old Trafford, as Monaco Life followed the youth side on an unforgettable night at ‘The Theatre of Dreams.’

When AS Monaco took their academy side out of the N2 at the start of the season, it was for nights like this. As Damien Perrinelle told Monaco Life post-match, playing at the iconic stadium, colloquially known as ‘The Theatre of Dreams,’ is usually experienced through the medium of the popular video game FIFA, but his side immersed themselves in the reality of the tie on Friday night.

Despite Manchester United’s professional side playing at Old Trafford only the night before, thousands were still attracted by the proposition of watching the Premier League International Cup match. Amongst the crowd was the club’s sporting director Paul Mitchell, who returned to his native Manchester for the fixture, and who will undoubtedly have been impressed by what he witnessed.

Neither side managed to get a foothold in the match early on. The Principality side had the structure and the metronomic figures in the centre of the park to control the game, but possession was all too easily squandered in the opening minutes. In such an environment, some players saw the headlines and went for goal, when passing was the better option.

Gradually, and thanks to a small positional tweak, Monaco began to dominate, although this didn’t manifest in clear-cut chances. However, Perrinelle’s side did have the best chance of the match just before the end of the half. The Groupe Élite adopt the principles of the first team, and the intense pressing on display was certainly evocative of Philippe Clement’s side. That pressing was almost rewarded when Edan Diop’s good work allowed him to win the ball high, before playing it through to Enzo Baglieri, whose shot was well-saved.

After the tactical shift in the first half, there was a mental shift in the second. “For these players to get to this point, they all have a strong ego. What is even stronger is putting this ego to the service of something bigger – the team. What we saw in the second half was a very strong Groupe Élite ego that refused to suffer and we imposed our ideas, our way of seeing the game, our way of playing,” said Perrinelle.

Monaco’s fragile first-half dominance gave way to a much more imposing display in the second. The midfield of Soungoutou Magassa, Mamadou Coulibaly and Félix Lemaréchal, who captained the team on the night, ran the show for Monaco.

However, a mistake from the latter almost allowed Manchester United to take the lead against the run of play. The captain lost the ball in a dangerous area, and United quickly converted the mistake into a gilt-edged 1-v-1 chance, but Yann Liénard, who often features in the first-team squad, made a brilliant save to deny Omari Forson. The goalkeeper, who will now go off to represent the France U20 side celebrated the save like a goal.

“I celebrated the save because it was worth a goal and it gave a boost to my teammates,” Lienard told Monaco Life. That psychological boost quickly manifested itself in a goal.

Nazim Babaï, who was a threat down the right throughout the game, played the ball across to Coulibaly, who had the composure to steady himself and place his finish from inside the box. Manchester United almost immediately replied through Charlie McNeill, but the scare re-focused Monaco’s efforts and from there, the side were rarely threatened defensively.

Diédry Kouassi then put the cherry on the cake with an injury-time goal to secure the victory, queuing joyous celebrations in front of the stunned Manchester crowd.

“I really think they’ll remember this moment in their future careers, whether they have prestigious ones or not. But the most important thing is to keep memories. Not everyone will be able to say they beat Manchester United at Old Trafford. For these players, it’s an extraordinary experience. These are dreams,” Perrinelle told Monaco Life.

He continued, “We’re in the present and we’re in reality as well. I think the match is a bit of a reflection of that. For the first 20 minutes, I think we were in a dream and we weren’t actors. We had to get used to this environment because it’s the kind of stadium that we play in when we’re on FIFA. We had to move from what we see on the TV, to now and being engaged. The only way to make the most of this moment is by being an actor. It’s also a lesson for them that the first 20 minutes that you have to immediately get into the match.”

A different kind of experience awaits Monaco’s Groupe Élite on Monday. The side will go from playing in the 75,000-capacity Old Trafford to Meadow Park, home of non-league side Boreham Wood, capable of welcoming just 4,500 fans, where they will face Arsenal.

“We mustn’t forget that we’re playing against Arsenal. Yes, we’ve started in an extraordinary environment, and then maybe after we say, ‘this isn’t the same; the atmosphere is different.’ No, guys, it’s Arsenal, it’s the Premier League International Cup. We have objectives and we want to win every match against every opponent and everywhere we visit,” said Perrinelle.