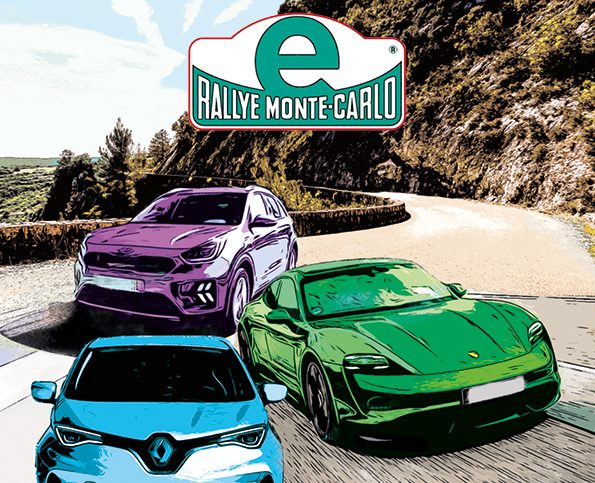 After last year’s cancellations due to the after-effects of Storm Alex, the E-Rally Monte-Carlo is back for its fifth edition with its most challenging course yet.

The Principality’s 100% hydrogen and electric car rally, the E-Rally Monte Carlo, returns from 20th to 24thOctober with a 350-kilometre course divided into 15 “regularity specials” (SR) or steps, 55 teams and 110 participants.

In all, racers from 12 nations will be competing and 21 models of vehicles will be on display.

The latest incarnation is a result of regularising the event and making it parts of the E-Rallye de Regularité Cup of the FIA 2020.

The departure point will be in Châteauneuf, in the Loire department, on Wednesday 20th October. The city is credited with being the first municipal domain in France to be autonomous in green energy. This stage will consist of three SRs with an arrival in Valence.

There will then be four SRs within the city of Valence on the 21st.

The next stage on Friday 22nd has racers doing four monster stages from Valence to Monaco.

The final push takes place on Saturday 23rd October where the last four stages make a loop from Monaco, taking racers to four stopping points in the Var. The last step is a race back to the Principality to cross the finish line.

“By definition, the E-Rallies aim to promote new automotive technologies, designed to emit the lowest possible quantities of pollutants, fine particles and CO2,” says the Automobile Club of Monaco. “They also aim to encourage drivers to adopt eco-responsible driving, with priority being given to environmental protection and the transition of the transport sector, through the use of electricity as a source of energy to propel vehicles.”

Coface 2017 in Monaco. Photo: Twitter MEB[/caption] On Wednesday, Julien Marcilly, Chief Economist at Coface, will deliver the essential content from the 22nd Coface Annual Country Risk Conference, which was held in Paris on January 23, in the presence of a thousand economists, entrepreneurs, bankers and academics. The goal of the yearly event is to focus on the evolution of country risk throughout world and help those involved in international trade – whether CEOs, commercial directors or credit managers – to define an efficient business development or investment strategy and to take informed decisions regarding risk in their home country or abroad. The Coface Group is a world leader in credit insurance, contributing daily to the development of 35,000 companies in nearly 200 countries. A subsidiary of Natixis, BPCE's financing, management and financial services bank, Coface offers companies the reliability of the second largest French banking group. To discuss global economic trends and issues facing the world economy in 2018, a breakfast will be held at the Salon Bellevue at Café de Paris from 8:15 am to 10 am. Few spots remain, to register contact: info@meb.mc.

Local News Stephanie Horsman - July 2, 2020
AS Monaco Basketball has reported the return of Zvezdan Mitrovic as head coach of the Roca Team for the coming season.