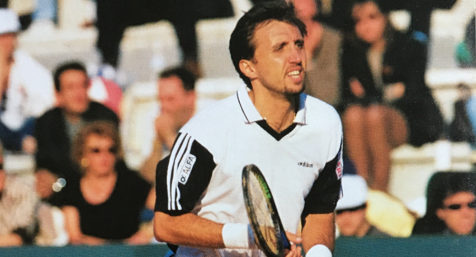 ML: Like your friend Giuseppe Ambrosio, you are from Naples. Can you tell us about your tennis background?
DN: My tennis resumé includes 39 Grand Slam, 3 times in the Italian Olympic tennis team and 25 caps for Italian Davis Cup (finalist in 1998). I was also Winner of Wimbledon Junior. My best ATP ranking was No 57 for Singles and 25 in Doubles.

ML: Tell us a brief history about the International Tennis Academy (ITA), and what programs it offers?
DN: The ITA Academy offers a chance to be your best. My method is called “Easy Tennis” and it allows players to improve their game in only a few hours of training. We work with young players, from the age of 10, who train with me year around, and adults who come to our academy for a week or a long weekend.

ML: What are your tennis goals for the future?
DN: I hope to become one of the best coaches in the world and, eventually, Captain of the Davis Cup.

ML: Who are some of the players you have trained?
DN: I trained and managed Top 100 players such as Flavia Pennetta, Filippo Volandri and Filip Krajinovic.

ML: Can anyone train enough to be a pro?
DN: If a player trains hard from a young age, say around 14 to 16, of course he or she! will have a chance to become a professional tennis player.

ML: What does the Monte Carlo Rolex Masters mean for Monaco in terms of international recognition in the world of tennis?
DN: The Monte Carlo event sends out a great image for the Principality around the world. Photos of the centre court facing the sea are famous and most of the players love Monaco and its atmosphere.

ML: Do you think tennis is still interesting to watch even though the same male players have been dominating the game for years?
DN: I think that great matches like Federer/Nadal, Borg/McEnroe or Agassi/Sampras are of huge interest to a large portion of the public, even people who are not necessarily tennis fans. For me, having the same players at the top for a while has been good for the tennis world.

News Stephanie Horsman - October 29, 2019
Charles Leclerc can’t catch a break these days. He went from pole position to fourth place, losing what should’ve been his race to win. A decision to put Leclerc on a two-stop strategy at Sunday’s Mexican Grand Prix left Ferrari again seeing Mercedes’ Lewis Hamilton snatch victory from their fingertips. Leclerc wound up a disappointing forth, with teammate Sebastian Vettel coming in nearly two seconds behind Hamilton, followed by Mercedes pilot Valterri Bottas in third.