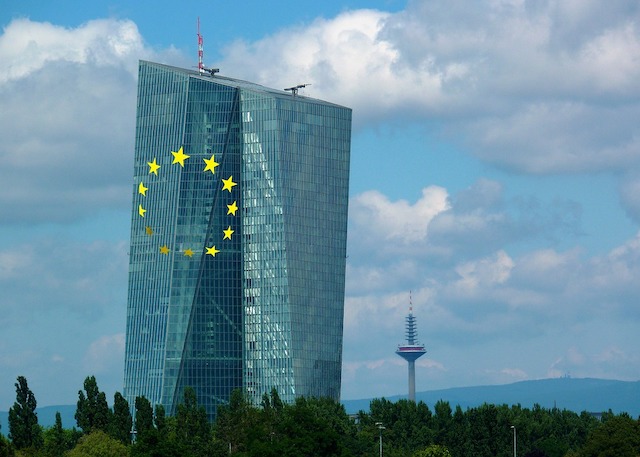 The European Central Bank (ECB) has announced new measures to ease the strain on countries who have seen record economic downturn since the beginning of the health crisis.
The main authority that governs banks in the 19 countries who use the euro decided on Thursday 30th April to lower interest rates on loans provided to member state banks. Credit lines were also made available to soften the blow to the economy, which has seen its biggest first quarter contraction since record keeping began in 1995.
These new plans are in addition to the already announced stimulus package that includes €750 billion in bond purchases. The intended effect is to drive down market borrowing rates for governments and companies.
The ECB has also reduced the requirements necessary for bank capital cushions. This allows banks to be freer in lending to outside sources as they are not restricted in order to keep themselves afloat.
The bank is warning that the economy could go down by as much as 12% in 2020, prompting them to state that they are prepared to step in with extra assistance if required.
All eyes are now on Christine Legarde, the ECB’s President, whose missteps in the early days of the epidemic were soon rectified. She initially said that the bank was not involved in capping borrowing costs for indebted governments, words she quickly rescinded and followed up by creating emergency bond purchases during the pandemic that have helped keep borrowing markets fairly stable.
The European Central Bank injected themselves further when first quarter figures showed the economy had contracted by 3.8%. This drop was worse than even the tumble during the recessionary period in 2009.
“Let us understand the whole firepower the ECB has available, which is north of €1 trillion,” said Ms Lagarde. “We will use the full flexibility to deploy this firepower to intervene where we think there is a particular risk of tightening [of financial conditions].”
Despite the massive hit to the economy, unemployment figures have remained remarkably close to pre-health crisis levels. March unemployment sat at 7.4%, whereas it was 7.3% in February. Though these figures are encouraging, they may not be wholly accurate, as the lockdown was only introduced halfway through March.
The French economy has been officially declared in recession. This is marked by two consecutive quarters of contraction. France’s economy dwindled by 5.8%, the most the country has seen since 1949 when records started to be kept.