“Education has been neglected globally” 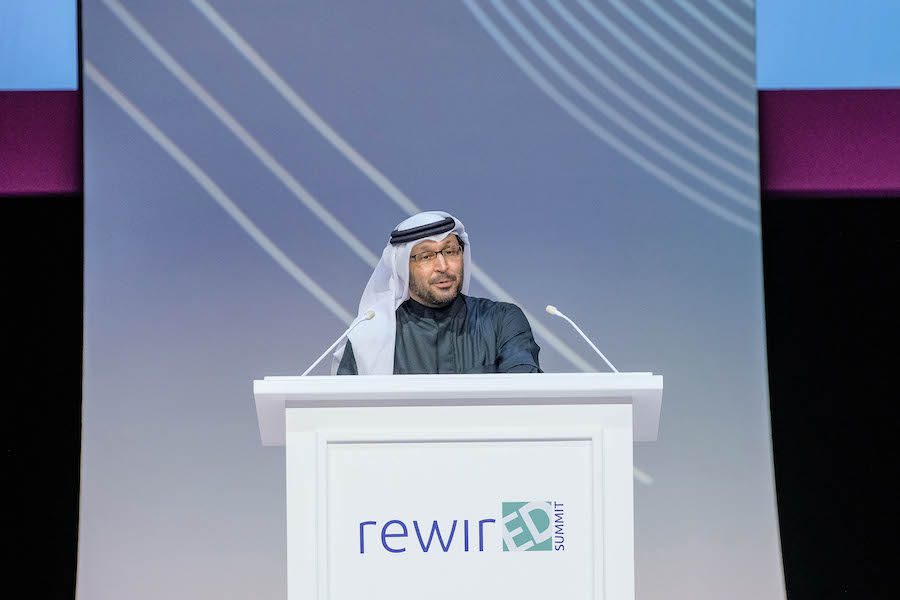 Stakeholders have come together at a major summit in Dubai with one clear goal: to put education on the global agenda alongside issues like climate and health. We talk to Dr. Tariq Al Gurg, CEO and Vice-Chairman of Dubai Cares, the organisers of the summit.

The RewirEd summit was the first of its kind. Held from 12th to 14th December as part of Expo 2020 Dubai Knowledge and Learning Week, the high-profile event served as a platform for global education stakeholders to spark a conversation and generate new ideas on how to tackle the future of education.

“Education has been neglected, globally,” Dr. Tariq Al Gurg, CEO and Vice-Chairman of Dubai Cares, told Monaco Life. “Everything has a global agenda – climate, water, malaria, agriculture, health… The education sector doesn’t. It is fragmented with no unity, no one platform or one meeting, to set an agenda.”

The RewirEd summit was organised by Dubai Cares in partnership with Expo 2020 Dubai and in close coordination with the UAE Ministry of Foreign Affairs and International Cooperation and delivered in partnership with global stakeholders. It saw the participation of more than 2,000 in-person attendees from 60 countries, focusing on topics around how and why education systems need to change to provide young people with better opportunities.

“Out of the trillions of dollars spent in foreign aid, only three percent is going towards global education. That is why we have one entire day dedicated to financing,” explained Dr. Al Gurg.

The other two themes on the agenda were youth, skills and the future of work, as well as innovation in education.

Ultimately, RewirEd aims to unlock new solutions for the future of education by fostering collaborations between new and unlikely allies from across the private and public sectors, whilst bringing together existing platforms and partnerships to amplify their impact across the education ecosystem.

Prince Albert II of Monaco, who had just returned to the Principality after visiting the Dubai Expo, addressed participants in a recorded message, highlighting the vital role that the environmental crisis should play in education.

“We will not succeed in implementing the necessary changes if we continue to consider the environment as just one concern among others, perhaps more distant than others. We need to instill a different mindset to promote new responsibility and solidarity to involve our children in all aspects of their lives,” said the Prince.

“This work therefore needs to be done in the first few years of life at the time we discover the world with wonder and when we learn to understand our place in that world.”

There were also high-level representatives from UNESCO, UNICEF, UNHCR, the World Economic Forum (WEF), the World Food Programme (WFP), the Organisation for Economic Co-operation and Development (OECD), the World Bank, the International Telecommunications Union (ITU), and Education Cannot Wait (ECW), a global fund to transform the delivery of education in emergencies.

“At the end of the three-day summit, we had an outcome report that will be managed by the Education Commission under Gordon Brown and is aligned with the recently announced ‘Our Common Agenda’ report by the UN Secretary General,” revealed Dr. Al Gurg.

The UN report, launched on 10th November, calls for transformations to both “repair past injustices” and build capacity for a more sustainable and just future. It aims to foster a “contract” between parents, children, and educators.

“Moreover, our report will feed into the UN Summit on Transforming Education 2022 that the UN Secretary General is convening next September,” added the Dubai Cares CEO. “It will hopefully be the initial step on a path towards the first ever global education agenda.”

So who, or what, is Dubai Cares?

Dubai Cares is the epitome of smart philanthropy. It was created by His Highness Sheikh Mohammed Bin Rashid Al Maktoum, Vice President and Prime Minister of the United Arab Emirates and Ruler of Dubai, who believed that education is more than a human right, it is an irrevocable asset, and one of the most effective tools to break the cycle of poverty.

It was from this belief and the desire to give children, regardless of their gender, nationality, race, or religion, the opportunity to become positive contributors to society, that His Highness launched an eight-week fundraising campaign in 2007 that raised a staggering 480 million dollars, mostly from the public and private sectors and HNWIs of Dubai. He then matched that figure with 480 million dollars from his own pocket. The result was the creation of a non-profit, non-governmental organisation with a start-up capital of 960 million dollars. What the organisation has managed to achieve since then is nothing short of miraculous.

“His Highness developed Dubai Cares at a time when there were no global mechanisms or entities working towards innovation in education, providing the best solutions to children to have access to education, or receive quality education, primarily in developing countries,” explained Dr. Al Gurg. “When God gives you blessed land and money not as a person, but as a leader of your community, you have to use it to give back, sometimes to your own societies but sometimes to less fortunate societies globally.”

Dubai Cares is now positively impacting the lives of more than 20 million individuals in 60 developing countries and continues to play a vital role in helping to achieve the United Nations Sustainable Development Goal (SDG) four, which aims to ensure inclusive and quality education for all in order to promote lifelong learning by the year 2030.

But the path to success has many different routes.

Dubai Cares provides basic infrastructure for learning by helping to build and renovate schools and classrooms, equipping them with the necessary materials for children and teachers.

But in the most remote locations of the world, like rural Ethiopia, this is the least of the students’ problems.

“Intestinal worms are one of the biggest issues that prevents these children from going to school,” revealed Dr. Al Gurg. “Those children with bloated stomachs that you see, the majority of cases are worms; 50 to 200 worms that vary from three to seven inches long in one child’s stomach.”

Many children drop out of school because the worms make them lethargic and unable to master key competencies.

So, in its effort to create equal access to education for all, Dubai Cares, with its local implementing partner, developed a health and hygiene programme.

“We didn’t just want to deworm the children, we needed to have a mind shift in people. Parents didn’t know about the worms in their children’s stomachs. So, working with the health ministry, the education ministry and community members, we started a door-to-door awareness programme, informing parents that their children were getting sick because they were drinking contaminated water and not washing their hands after going to the toilet.”

As part of its WASH programme, Dubai Cares provided children with hand washing facilities, gender specific latrines, and hygiene education. Dubai Cares also helped to develop the government’s capacity to provide training to teachers and community members on the importance of washing hands with soap.

The programme was so successful in southern Ethiopia that the government eventually rolled it out across the entire country, and school enrolment and retention rates went up.

The projects are as varied as the people that benefit from Dubai Cares, from a school meals system using organic produce by local farmers, to youth empowerment and adult literacy, to building the capacity of governments to make parents understand the importance of health check-ups and vaccination cycles for their children.

“In some countries like the Philippines, South Sudan, central America, Yemen, and Pakistan, girls don’t have any access to education. This is not because of faith, but rather cultural beliefs. So, we try to have a policy change in the government’s approach and a prioritisation towards girls’ education.”

Dr. Al Gurg says a vigorous monitoring and evaluation system guarantees the success of its model.

“On a weekly basis, my team visits these countries to monitor and evaluate the progress of our programs. When there is an issue, we sit with the parents, teachers, students, and education district officers, to see how we can modify the programmes, which run for three to five years on average. The final evaluation comes from a third party, so we can see what is working and what is not working, for it to become an innovation for the future.”

Previous article‘Tremblings’ at the NMNM
Next article“We owe it to our society”, Prince calls for solidarity in 2022
Cassandra Tanti

Local News Cassandra Tanti - September 17, 2020
Ever Monaco, the first event to take place at the Grimaldi Forum since the health crisis hit, has been a great success, with two particular unveilings attracting plenty of attention.

Photo: Monaco Inter Expo[/caption] The Department of Tourism and Conventions, in collaboration with Monaco Inter Expo (MIE), organised a series of three concerts in the Monaco Pavilion at the Astana World Expo during the last week of August in order to showcase the Principality as a tourist destination. Olivier Innocenti, composer-performer and first prize winner of the Academy Rainier III, gave a performance with his Classical Accordion. The native of Monaco also took part in two other concerts in the main building of Astana 2017. In parallel, some forty international guests attended a presentation of the cultural life of the Principality.