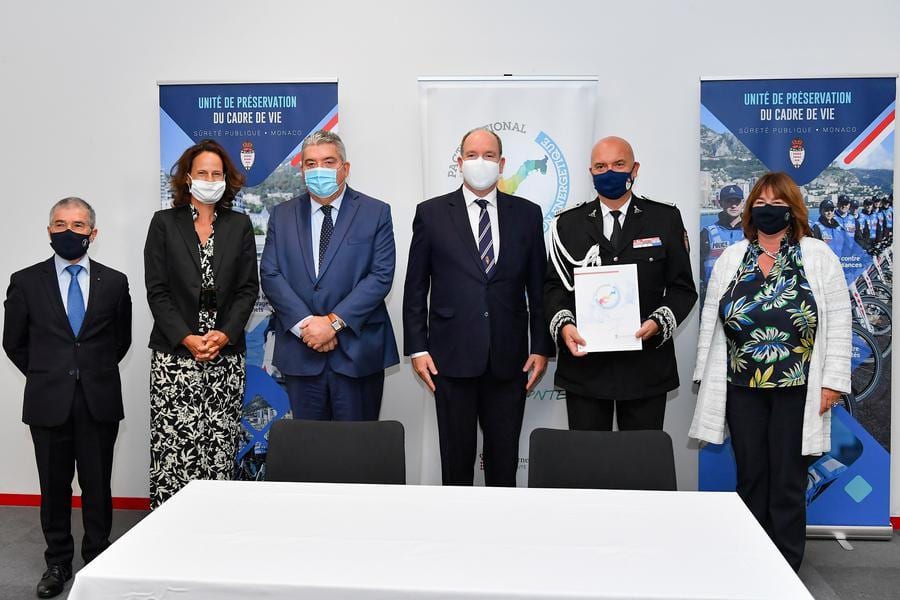 The National Pact for Energy Transition has just gained more than 600 new individuals thanks to the recent signing by the Public Security Department.
Public Security is the newest member of the growing group of businesses, associations and institutions to become part of Monaco’s Energy Transition Pact. In an official ceremony held Monday with Prince Albert II and several high-ranking government officials, Director of Public Safety Richard Marangoni put pen to paper, committing the nearly 600 state agents and civil servants that make up the department.
The commitment of the police force is therefore a significant one and will be instrumental in adding even more signatories by agreeing to hold awareness workshops led by the Mission for the Energy Transition (MTE).
“The personnel of the Public Security have been working for several years to apply the recommendations to raise their participation in sustainable development,” said Mr Marangoni in explaining that this next official step had been years in the making.
Recent acts that back up the claim include the creation of a 10-person Living Environment Preservation Unit (UPCV) whose aim is “to ensure the preservation and improvement of the living environment of residents of the Principality”, and the crackdown on those disposing of rubbish, namely masks and gloves, incorrectly on public streets since June.
In her speech, Minister of Equipment, Environment, and Urban Planning Marie-Pierre Gramaglia, expressed the urgent need to make the transition, saying: “Looking at our world, we can clearly see that the challenges are equal to the climate emergency resulting in increasingly frequent and violent episodes such as the devastating storms that have hit the three valleys of the Alpes-Maritimes so hard: la Roya, la Vésubie and la Tinée.”
“Faced with these terrible events, more than ever before, I am convinced that our individual and collective awareness cannot be relaxed,” she added. “Our commitment must be total and lead us towards the decarbonisation of our country by 2050. This mobilisation brings us all together: Monegasques, residents, employees, all socio-professional categories, all stakeholders in our community, and now Public Security.”
The Energy Transition Pact has added close to 1,500 individual signatories in its four year history.