Home News Local News Esteban Gutierrez: “It was a dream to drive this car in Monaco”

The weekend’s Historic GP was a nostalgic, exciting event, not least for the drivers. As former F1 driver Esteban Gutierrez told Monaco Life, they relish the chance to test themselves in these iconic cars, on this legendary circuit.

In an interview with Monaco Life after his race, Gutierrez opened up about the strong, often contrasting emotions that driving an iconic single-seater around the streets of Monte-Carlo elicits.

Gutierrez has had a varied professional racing career. After amassing 38 race starts in Formula 1 for Sauber, the Mexican driver then became the test driver for Scuderia Ferrari, before rejoining the Formula 1 grid with Haas in 2016. In a highly uncompetitive Haas, Gutierrez struggled, and the following year he tried his hand in Formula E.

He then joined Mercedes F1 team as a development and then reserve driver, and now competes in FIA Endurance World Championship. At the age of just 30, Gutierrez has amassed a wealth of experience in a variety of different cars, but as he told Monaco Life, taking the wheel of Pedro Rodriquez’s 1970 Belgian Grand Prix-winning BRM was one of the most special experiences of his career.

“It is definitely in the top three cars I have driven. I drove Michael Schumacher’s 2003 Ferrari car, which was an incredible experience, and then I drove the 2016 Mercedes, the most successful car in the history of Formula 1. That was also incredible,” he said.

Racing the car of his late compatriot around some of the most iconic streets in the world was special, he says. “It’s an honour to be here representing my country, driving Pedro’s (Rodriguez) car. To be driving this car, and especially here in Monaco, I never thought it was going to be possible. It just came together, and it was really fun to drive; an incredible experience.”

An incredible experience, but also a challenging one, and on the unforgiving streets of Monaco no less, where no mistake goes unpunished. That risk factor is only intensified when coupled with a lack of preparation time with the machinery itself. “I tested it on a small track at an airport. Luckily, I could test it for a couple of laps to get used to the gears,” revealed Gutierrez. “That was the most challenging part to do the hill and toll. It is something I’m not used to, lately of course with the modern cars is no longer part of driving. It was really interesting and here in Monaco it’s really fun; you have basically no margin for error in that respect.”

He added, “When you arrive at practice, you’re new to the car and you’re not used to it. There are lots of new things. It’s very mechanical, but it’s very physical as well. One of the beauties of the car is that it doesn’t give you any time to think about anything else, you have to live in the moment and you’re very busy with the gears and it’s just amazing when you get everything right.”

It is not just the technical aspect, dealing with the very visible oversteer and a way of driving that is alien to many modern motorsport drivers, but also the psychological aspect, as Gutierrez revealed.

“It’s not only hard, the approach is completely different,” he explained. “You get in the car and you know you’re vulnerable. In the back of your mind, you kind of consider and have a huge respect for the car itself and also the danger that it represents.”

Gutierrez admitted that despite the danger in driving this era of cars, which don’t feature all of the safety features of the modern-day racer such as the HALO system, a competitive drivers’ instinct kicks-in when they get behind the wheel.

“Even though it’s a race weekend, it’s more like a demonstration event. People out there are still competing and they want to achieve a good result. As a competitive racing driver, you still want to do well. Just like today, I was honestly pushing the car,” revealed the Mexican.

He added, “It’s a strange line. We all know that we’re here to demonstrate the cars, but at the same time there is a podium, there’s a result, and whoever is on top has the most prestigious result of the weekend.”

Ultimately, Gutierrez’s race didn’t pan out as he had hoped. Racing in the D Series race, he had to abandon on lap five due to a mechanical issue. However, that only strengthens his will and determination to come back and compete next year. “I am very angry with the mechanical failure to be honest. I can’t remember the last time I felt so disappointed. Of course, I’m going to come back and try to win it,” he said.

But it’s not simply Gutierrez’s competitiveness that compels him to take on Monaco’s streets again next year. “The whole weekend has been an incredible experience, but it’s also putting me outside of my comfort zone. I haven’t felt that in racing for a while… It is just fantastic. It was a dream to be here in Monaco, driving this car.”

Far more than simply an exhibition, Gutierrez reminds us of the inherent competitiveness of motorsport, which annually gives these historic cars a new lease of life in the Principality. For spectators and drivers alike, it is an event that transcends time, mimicking not only the aesthetic of the past, but also the sensations and feelings of that golden age of racing. 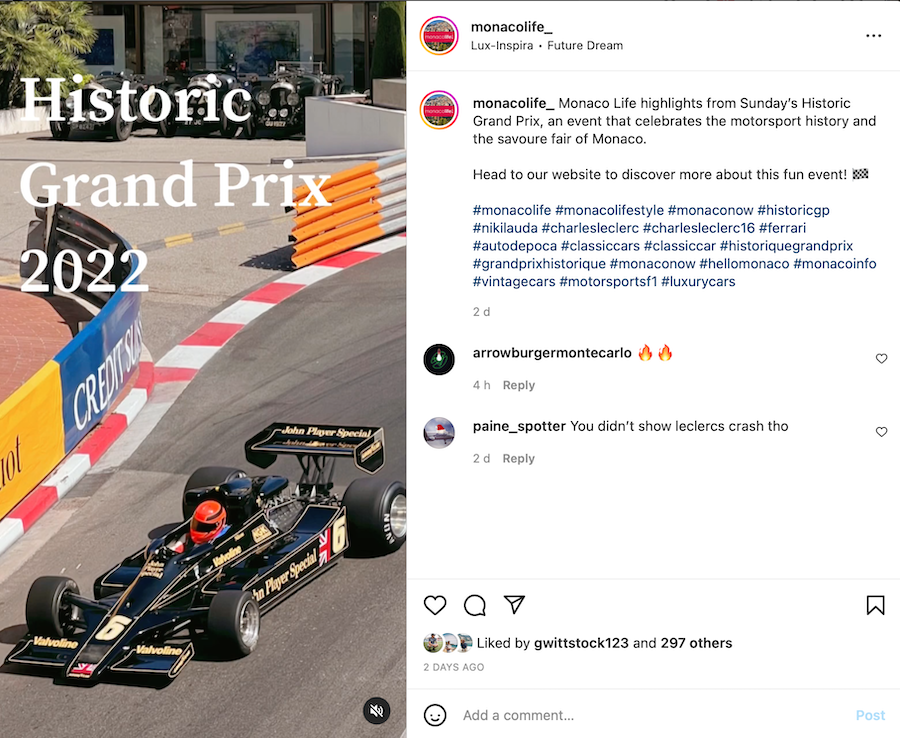 Previous articleMonaco offers solution to Alpes-Maritimes taxi drivers
Next articleASM preview: “We have nothing to lose”
Luke Entwistle

Business & Finance Stephanie Horsman - December 1, 2021
The World Chambers Congress, held in Dubai last week, was a huge success for the Monaco Economic Board, which took the opportunity to strengthen contacts and prepare for future missions.