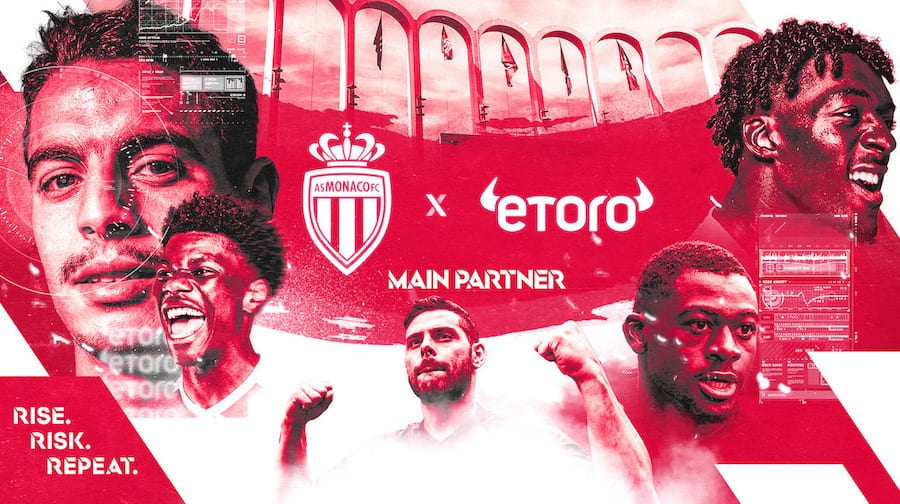 After 25 years of partnership and almost the same time on the jerseys of AS Monaco football players, Fedcom will give way to the eToro brand from this July.
EToro is an online trading platform that joined the Red and Whites in 2020 and was visible on the back of the players’ shirts. According to a statement from the club on Wednesday, come 1st July, eToro will be elevated to main sponsor of AS Monaco for the next two seasons, replacing Fedcom’s prime position.
“We are delighted to take this new step with AS Monaco and bring another dimension to our collaboration,” said Valérie Kalifa, Marketing Director France of eToro.  “We are proud that our first presence on the front of a jersey is on that of AS Monaco, which we will support more than ever in the coming season. Our vision is to open financial markets to everyone and we see this partnership as an opportunity to reach the fans of the team and to interest more people in investing.”
Etoro will also benefit from greater visibility at the Louis II Stadium in Monaco and all the club’s communication media.
“One year after the start of our collaboration, we are very happy that eToro has become the official main partner of AS Monaco,” said Oleg Petrov, Vice-President and Director General of AS Monaco. “This is the opportunity to strengthen our ties with a company that, like us, places development, competitiveness and innovation at the heart of its concerns. The evolution of the partnership also shows the attractiveness of AS Monaco. Together, we hope to have a season full of emotions.”
The partnership marks a new era for AS Monaco, which has had Fedcom as its main sponsor for a quarter of a century. Fedcom has now been given ‘Legacy Partner’ status and will still be displayed on the jerseys during European Cup matches.
“Fedcom is a long-standing and loyal supporter of AS Monaco. This longevity has enabled us to create a strong and special relationship over the years. We are therefore delighted to be able to continue, through this partnership, to experience strong emotions and look forward to the future together,” said Petrov.