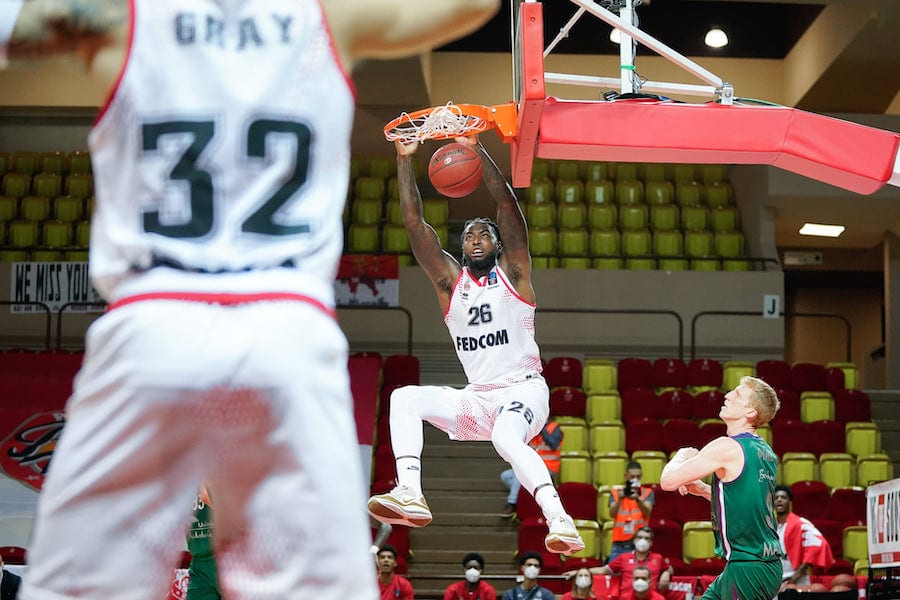 The AS Monaco Basketball team dominated their Spanish opponent from Unicaja Malaga on Wednesday night with a crushing 90 to 71 victory.
The Roca Team soundly beat Unicaja Malaga by a whopping 19 points at Salle Gaston Medecin, making back-to-back wins for the team in the Euro Cup Top 16. This win puts them squarely at the top of their division.
Despite a rather shaky start that saw Monaco down by ten points in the first four minutes and were even farther behind at the end of the first quarter hour of play where they trailled 19 to 37.
The team finally rallied and by the 24th minute they had evened the score, thanks in large part to their concentrated efforts and teamwork.
Captain Dee Bost was the first to shake thigs up and when the fire was lit under him, with Rob Gray, Mathias Lessort, and JJ O’Brien soon to follow.
Monaco made 32 shots out of 75 on the night, with 10 out of 27 three pointers converted. The team collectively made 31 rebounds, of which nine were Lessort.
“The team was on fire, not just me,” Mathias Lessort said after the game. “The locker room was a happy place, it was a big game for us, a very important victory in a very contested group. In the second half, we were very aggressive, we raised the bar, everyone gave it their all. Of course, the goal is to continue like this, we battle for first place. The last time I took eight offensive rebounds? I don’t remember, it had to be in the youth categories.”
Rob Gray was high-scorer on the night for both teams with a massive 24 points under his belt. Lessort also had a fantastic night, scoring 20 points. Bost and O’Brien were no slouches either, adding 15 and 13 points respectively to the total.
Coach Zvezdan Mitrovic was proud of his men, saying, “The way we played in the second half is very important. Great aggressiveness, great energy. After that, we broke free in attack. The boys gave everything on the floor, a very good state of mind.”
The Roca team return next Tuesday at 8:45pm where they will be playing against Joventut Badalone in Barcelona.