European Commission takes a bite out of Apple 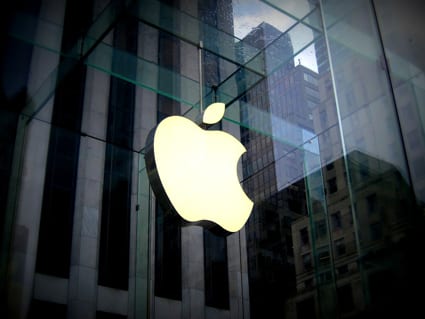 Ireland should act to recover up to €13 billion from Apple in back taxes, the European Commission has ruled. After a three-year long investigation, it has concluded that the US firm’s tax benefits are illegal.

The commission concluded that Apple received “illegal state aid” from Ireland — essentially a sweetheart deal that allowed the computer maker to unfairly reduce its tax bill in a way not available to other companies, according to the report.

The Commission said this enabled it to pay substantially less tax than other businesses, in effect paying a corporate tax rate of 1%. Both Apple and the Irish government are likely to appeal against the Commission’s ruling.

Business & Finance Cassandra Tanti - November 13, 2019
Monaco jeweller Alberto Vitale put coral front and centre at the Yacht Club of Monaco recently, inviting the Scientific Centre of Monaco to explain the important role that coral plays in our eco system. [ihc-hide-content ihc_mb_type="show" ihc_mb_who="2" ihc_mb_template="1" ] “I wanted to host this event because even I, whose family has been in jewellery for four generations, never used to know what coral actually was,” reveals Alberto Vitale. “Is it an animal? Is it a rock? I decided to ask the Scientific Centre to explain coral from a scientific point of view.” As Scientific Director Denis Allemand told a crowd of around 65 YCM members, corals are sessile animals that permanently attach themselves to the ocean floor, essentially “taking root” like most plants do. 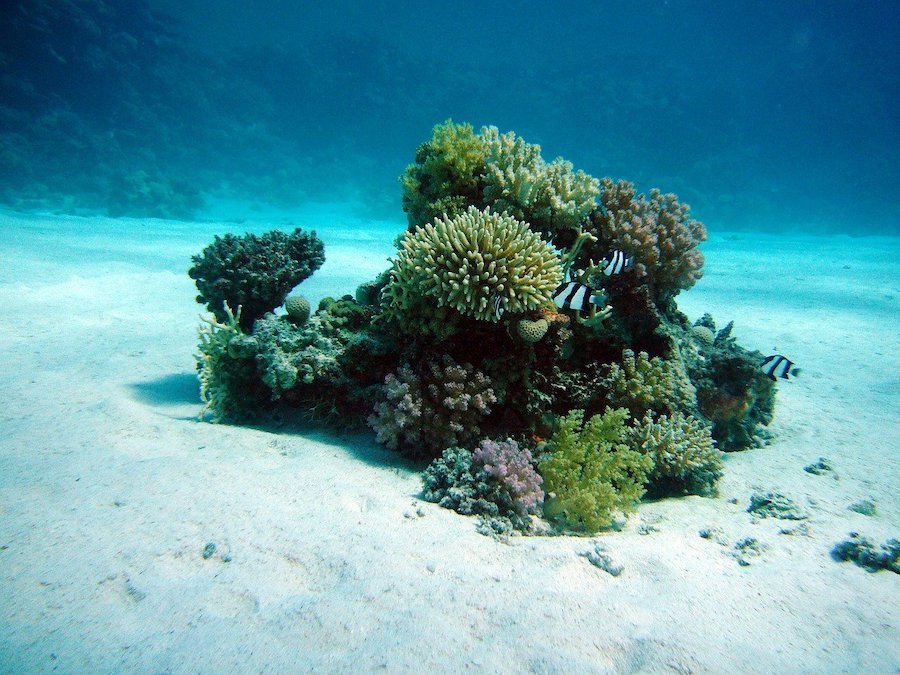 Most coral structures are made up of hundreds to thousands of tiny coral creatures called polyps and each soft-bodied polyp secretes a hard outer skeleton of limestone that attaches either to rock or the dead skeletons of other polyps. These structures form the home for thousands, if not millions, of other species. If the coral dies, so do hundreds of thousands of animal and plant life. “Everyone at the evening was surprised to learn that coral was an animal,” explains Alberto. “They were also surprised to learn that coral is so important for our lives and for the life of the planet.” 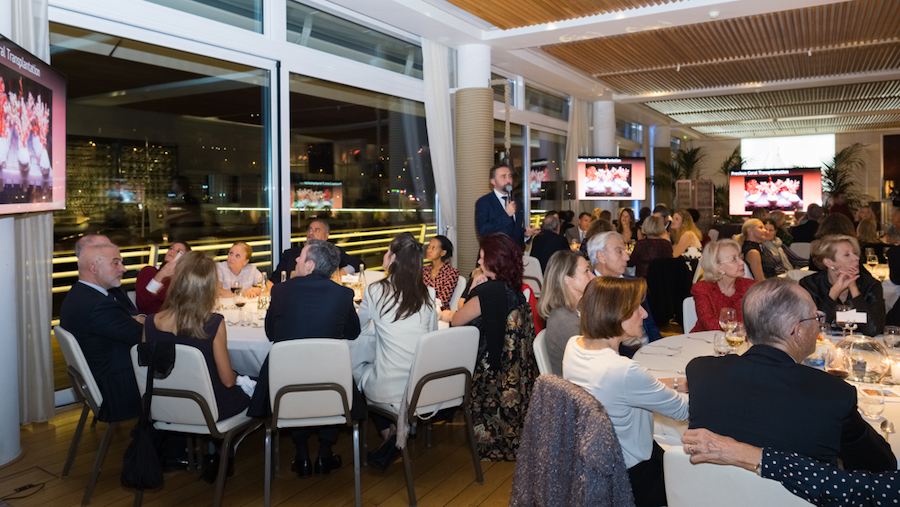 After the scientific explanation, Alberto described how he uses coral in his high-end jewellery. “We only use coral that comes from 50 metres below the surface, not the coral you would usually see diving and snorkelling. But in particular, I explained that we use ethical coral.” Hundreds of years ago, explained Alberto, there was a volcanic eruption in the Mediterranean Sea near Sardinia which destroyed a vast amount of coral naturally. It is this coral that he uses in his jewellery. 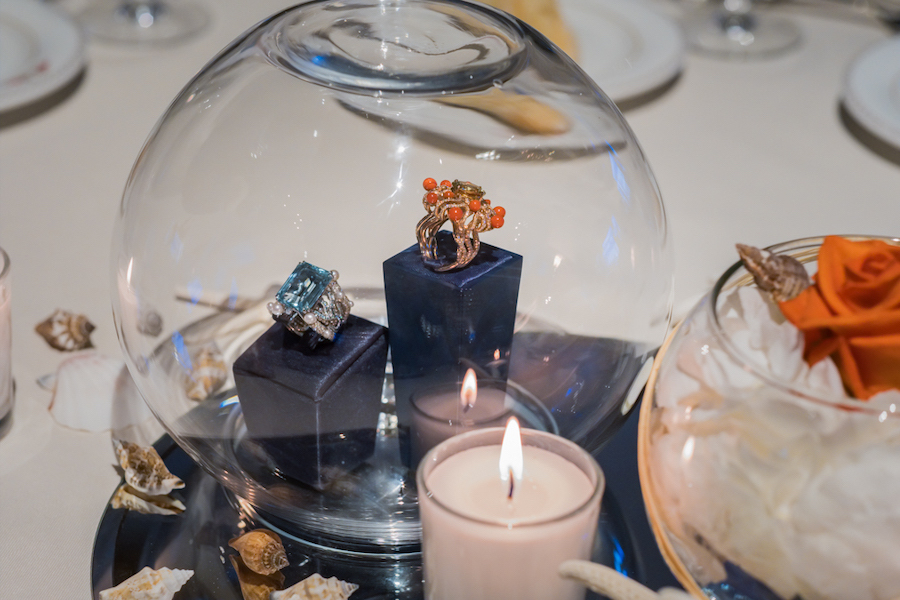 “I also presented my recent collection and explained that I give 8% of the sales to the Prince Albert Foundation and through them we give money to the Scientific Centre, who conducts research to not only save the coral, but in turn save humanity, because coral has properties that can be used for health and therapeutic purposes.” Meanwhile, Alberto announced at the end of the evening that he would be funding a new piece of equipment within a year that the Scientific Centre needs in order to study coral. “I think they do a very vital job so it is important to help them discover how coral can save our life and how we can save coral. It is a circle.” Alberto Vitale will present his new collection inspired by the ocean and coral from the 1st December at his showroom in Monte Carlo.   Top photo: Scientific Director Denis Allemand and Alberto Vitale   [/ihc-hide-content]

Business & Finance Staff Writer - October 29, 2019
With Halloween approaching, hopefully markets won’t be spooked by this week’s batch of macro data (and by the ghost of a no-deal Brexit). Needless to say, Brexit is the key event to look out for. Although it remains hard to call the final outcome, we believe that the chances of a resolution have now increased after PM Johnson obtained Parliamentary support for his Brexit bill. Meanwhile, given the protracted uncertainty, we wouldn’t be surprised to see gloomy manufacturing purchasing managers’ indexes (PMIs) out of the UK. In the US, all eyes will be on the US Federal Reserve’s (Fed) policy meeting on 30th October, with the central bank expected to deliver a 25 basis point rate cut on the back of slowing global growth. Although the Fed is unlikely to start a full easing cycle, as trade tensions seem to be receding, much will depend on the latest domestic quarterly growth number. The advance in third-quarter (Q3) gross domestic product (GDP) is likely to edge down to 1.5% on an annualised basis from 2% in Q2, given recently deteriorating US leading indicators. While the struggles of the corporate sector are known, we would be cautious to write off the consumer too quickly and instead wait to see next week’s employment numbers. Consensus points to a slight moderation in the unemployment rate, but this should be offset by a modest pick-up in wage growth. In the eurozone, the quarterly GDP reporting season continues. The area is likely to avoid a recession in the three months to September, although growth should remain subdued at 0.2% quarter on quarter. With the manufacturing sector stuck in contraction territory and weaker imports suggesting softer domestic consumption, markets remain on the look-out for signs of improving macro data. Much-needed relief could come from the labour market, should September’s unemployment rate remain unchanged at 7.4%, the lowest level since 2008. Meanwhile in China, the economy is likely to continue in “soft-landing” mode, following the weakest GDP growth rate in 26 years seen in Q3. Although premiers Trump and Xi are expected to seal their “phase 1” trade deal next month, tariffs remain in place and a definitive resolution is still far from done. So, we wouldn’t be surprised to see continued weakness in October’s manufacturing PMI, although the temporary trade truce should release some downward pressure from the manufacturing sector. For more information contact Barclays Private Bank in Monaco by clicking here or on +377 93 15 35 35