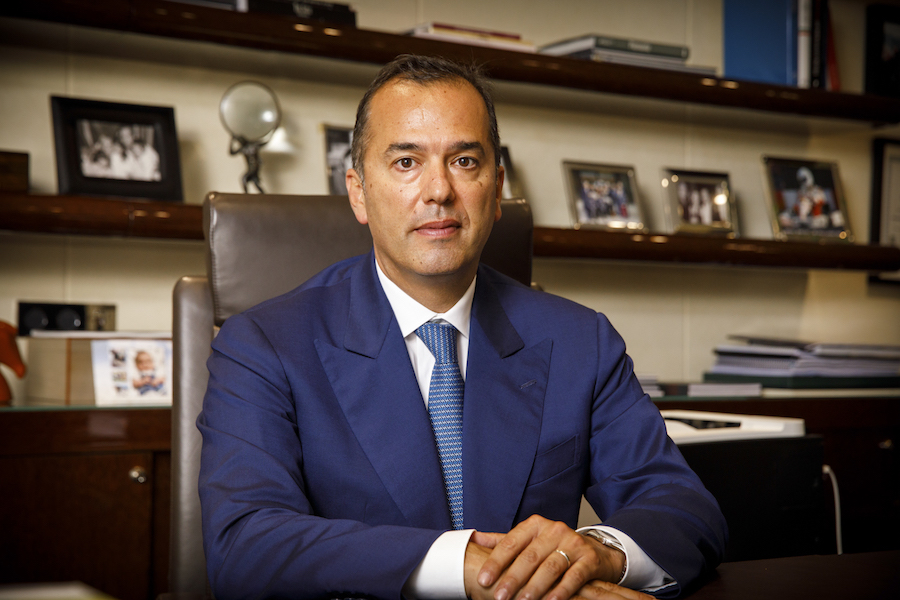 When completed, Bay House apartments in the new Testimonio II development will be among the most expensive properties in the world. But, as Daniele Marzocco explained to Monaco Life, it is the successful mixing of public and private housing that this Italian family are most proud of.

It is in the meeting room of the Groupe Marzocco, on the ground floor of the company’s crowning glory to date, the Odeon Tower, that Daniele Marzocco tells me what led his family to this very point in life: a mafia kidnapping in Italy.

“The event was a life changer, very difficult at the time, but today I think it is one of the best things that could have happened to us,” he says.

Daniele’s father Claudio, aged only 29 at the time, managed to escape his captors after 15 days bound. It was the year 1988 and Claudio, who suffered from severe vision problems, fled into the woods, traversing more than 30 kilometres on foot in a freezing cold forest filled with wolves. Somehow, he managed to survive, and within a matter of weeks, Claudio had moved with his wife Doriana and his two young sons, Daniele and Niccolò, from San Remo to Monaco.

“We were not rich, it was not for tax reasons, we all moved to Monaco for the security,” explains Daniele Marzocco, now one of the managing directors of Groupe Marzocco.

Working in construction in Italy, his father started again in the Principality: “Small projects but always aiming for quality, quality, quality,” says Daniele affirmatively, “and service, of course.”

The Marzoccos landed their first big project in 1993: the Michelangelo, Botticelli and Donatello residence buildings in Fontvielle. Other standout developments include the glass-clad Sea Club at Le Meridien, Villa de Rome and Villa les Gaumates, as well as Monegasque housing projects Les Jardins d’Apolline and l’Helios.

The company has achieved more than 50 development and construction projects in Monaco and the French and Italian Rivieras, becoming a benchmark for luxury property.

Groupe Marzocco’s style has been generally traditional, in line with the glamorous Belle Epoque architecture of old Monaco. But that all changed with the Odeon Tower. At 170 metres high, it is by far the tallest, most contemporary building in the Principality; a slender, sculptural work that mimics the blue Mediterranean Sea that it so spectacularly overlooks.

It was an enormous project. After purchasing the land from the State of Monaco in 2003, construction began in earnest in 2009 with Vinci Construction. They dug 10 floors underground and built 49 floors high. By the time the first apartments were delivered in 2015, the project had brought together 1,400 workers. Monaco’s first high rise was born, boasting 60 three-to-seven room apartments, two sky duplexes of 1,200sqm, and a record-breaking five-floor penthouse of 3,500spm with private rooftop swimming pool.

In exchange for the opportunity to purchase the land, Groupe Marzocco agreed to give significant square metreage back to the Principality. Therefore, 177 luxury apartments were earmarked for Monegasque citizens under a low-rent scheme. In one of the rarest public housing situations in the world, citizens are able to live alongside international residents who can afford the luxury of jaw-dropping views, haute couture interior design by Alberto Pinto, and state-of-the-art services including a valet, spa, pool, restaurant and bar in the centre of the city. The apartments in this skyscraper are selling for €20 to €50 million on account of their top-notch amenities. The 3,500sqm penthouse has been billed as the most expensive apartment in the world.

“When you speak about social housing, you always think about a neighbourhood far from the city. There is always a cliché, but not in Monaco,” says Daniele. “At the start, people would ask how they could live with the rich? But at the end of the day, these are just normal people and they all live together happily.”

It is something that Daniele Marzocco says his family is most proud of in this lucrative industry of luxury property development: creating a successful public-private cohabitation and “knowing that everyone is happy and enjoying the Odeon lifestyle”.

It is a winning formula that could have played a significant part in the Groupe Marzocco’s biggest property development to date: Testimonio II, currently under construction in the east of the Principality.

Unlike the land beneath the Odeon Tower, which was sold entirely to Groupe Marzocco, the Testimonio II site is still owned by the State of Monaco. Its waterfront location is reflected in the contemporary wave-like design, and the focal point will be Monaco’s newest landmarks: two spectacular towers at 32 and 30 stories high, housing 378 state-owned apartments.

The first tower, Elsa, is due to welcome residents to its 181 apartments in a matter of weeks. Connected to the Larvotto thalassothermal loop, the building will be supplied with sustainably-sourced hot and cold water, while solar panels on the roof will produce energy for the entire residence.

In exchange for building this enormous housing project, which will include a 50-place crèche, a new premises for 700 students of the International School of Monaco, and a 1,100-place car park, Groupe Marzocco has the right to construct a private development below the towers: Bay House.

Located in the newly-renovated Larvotto district, between Avenue Princesse Grace and Boulevard d’Italie, Bay House is just metres from sandy beaches, the Monte-Carlo Beach Club, fine dining restaurants like The Niwaki and Maya Bay, and the Monte-Carlo Country Club, home to the Rolex Monte-Carlo Masters.

This “horizontal tower”, as the Marzoccos like to call it, boasts luxurious living in 56 grand apartments, as well as five magnificent “villas”, each with their own private rooftop gardens and pools.

Designed by Arquitectonica and Monegasque architect Alexandre Giraldi, Testimonio II is a unique expression of Monaco’s ambition for its future.

“Monaco was seen as an offshore place a long time ago, even if that was only on paper,” says Daniele. “But for around 10 to 15 years now, it has really changed to an onshore location. What does that mean? People who were residents but not really living here full time only wanted small studio or one-bedroom apartments. Now, people are looking for apartments that they can really live in with their families. And when you really live here, it means you buy your bread every morning from the bakery, you go to the market, the shop, the restaurants… All of this is good for the local economy.”

The penthouses (or Monaco-style “villas”) sell the ultimate luxury lifestyle: independent lifts, rooftop terraces and private pools in which to relax and enjoy Monaco’s unique surroundings and climate.

Continuing Groupe Marzocco’s passion for impeccable services, Bay House features 500 square metres of amenities: a luxurious spa with massage rooms, a steam room and sauna, a hair and beauty salon, meeting rooms and state-of-the-art Technogym equipment, as well as five-star hotel services like a 24/7 concierge with valet parking and a daily shuttle service.

But unlike a hotel or typical Monaco residence building, Bay House is divided into blocks, each featuring its own elevator and entrance. It means that there is never more than one or two apartments on every floor, and a luxurious lobby for each, adding to the exclusivity of this new beachside lifestyle.

Daniele Marzocco is reluctant to discuss prices, but given the average prices throughout Monaco, it is fair to suggest that apartments in Bay House will be selling for between €70,000 and €85,000 per square metre, depending on the storey. That puts the smallest apartment at around €17 million, and the largest villa in the vicinity of €121.5 million.

It sounds extraordinary, but this is Monaco, and Daniele can reveal that more than half of the apartments have sold off-plan already. Now the initial impact of the war in Ukraine has softened, interest is also picking up again.

If Groupe Marzocco thought that the Odeon Tower was a huge project, Testimonio II would prove to be the most challenging yet. Initially, they had to dig 13 levels underground and accommodate two key water sources. They removed 150,000 cubic metres of land for a site that is 10,000sqm but encompasses 150,000sqm altogether.

The biggest challenge has been managing construction in the middle of Covid – keeping 1,100 staff safe and manoeuvring government-initiated site closures. Then came the soaring energy prices and cost of materials.

“In the end, we had no other choice but to pay more,” reveals Daniele. “Even if we signed a contract at a fixed price, we accepted that this was something that no one could have predicted. Delivery of materials has also been a problem. It could be something as small as a missing metal piece on a door. But it means that we do not get the door. So, we are trying to anticipate production, the supply chain, and purchasing what we can and storing them ahead of time.”

These unexpected crises haven’t blown timing out too significantly, he says. Tower two is due for delivery by the end February of 2024, and Bay House is expected to be finished by the summer of 2024.

When completed, Testimonio II will become the Principality’s newest architectural landmark, rising above Monaco in the same manner as the Odeon Tower. It will be another creative fragment in the architectural mosaic that is the Monaco cityscape.

And it will be another feather in the cap of the Marzocco family, which now encompasses more than 40 members; another development that ensures the Marzocco name will be forever forged into the history books of the Principality, cementing a legacy for the next generation.

“It is important for us to pass on our passion for the work, our passion for detail, and the need to always work hard, to be correct and honest. This will be our legacy to our children,” says Daniele proudly.

It is hard to believe in this tiny two-square-kilometre state, but Daniele Marzocco says there is still plenty of development opportunity in the Principality. Although he is well aware that this may come as unwelcome news to some residents who have tired of the constant construction.

“It’s not easy of course, but there are still some areas where there are opportunities for the Principality to create new districts and to requalify some old buildings that have no services. Monaco is like New York, there’s always demolishing going on,” he says.

“But our first commitment is Testimonio II. Our family is fully committed to delivering this project to the State of Monaco and our other clients. We have two more years of pushing to get this over the line, step by step.”

Step by step: it is how his father escaped captivity and a freezing cold forest in southern Italy. But Claudio could never have imagined then how far the Marzoccos would come in the safety and support of the Principality; how his family’s vision, hard work and ingenuity would shape Monaco’s landscape for generations to come, or how the company would set an example to the world of public-private housing harmony.

It is a success story, a family legacy, that continues to be written with every brick laid.