Exhibit on sport in the time of Albert I

Exhibit on sport in the time of Albert I 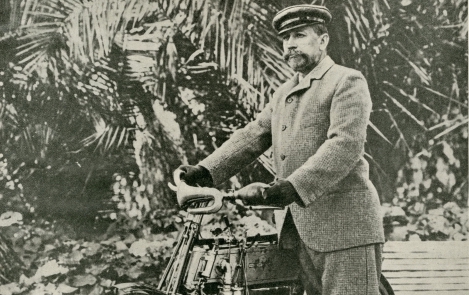 As the 100th anniversary marking the death of Prince Albert I gets underway, the Monaco Media Library is hosting an exhibition featuring sport during the time of his reign.

La Belle Époque usually conjures up images of impressive architecture, men in top hats, women in enormous bustles, and a flourishing of art and culture, but there was a decidedly sporty aspect to this period as well.

It was the era that saw the rise in cycling as a casual sports endeavour, as well as tennis, skiing, sailing and golf amongst others.

It was a prosperous time, marked by regional peace, economic prosperity and innovations in the fields of science, technology and culture. It gave many people, perhaps for the first time ever, the leisure time to pursue fun rather than focusing on hand-to-mouth existence and have fun they did.

In Monaco, Prince Albert I was a man of his time, and the Monaco Media Library has gathered together photos, documents, press clipping, posters lithographs and the like to create an exhibit featuring the pastimes of the people of the Principality during this epoch.

Called ‘La Belle Epoque sportive: influence and innovations under the reign of Albert I’, the show is a testament to the development of sport in Monaco throughout this period as well as the country’s contribution in the creation of major international competitions.

The exhibition is a can’t miss for fans of both the sporting world and the Belle Époque. It runs from 15thMarch to 10th April at the Salle d’Exposition du Antoine 1er, with guided tours available with reservation on Saturdays and without on Tuesdays, Thursdays and Fridays at 2pm and 3:15pm. The site is open Tuesdays to Sundays from 1pm to 7pm.