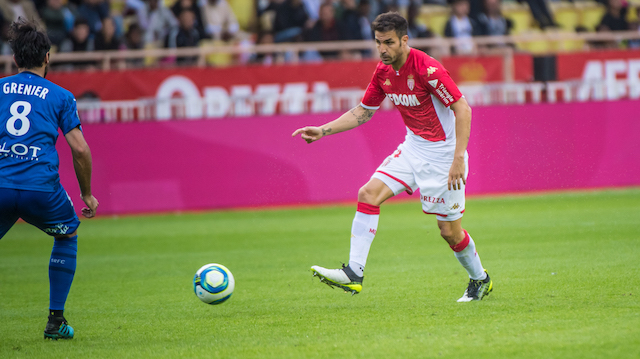 AS Monaco midfielder Cesc Fabregas has announced he will not be taking his usual salary for four months, as well as accepting a pay cut and offering to top up the wages of ground staff of the club’s training facilities.

The Spanish International and former Chelsea and Arsenal star was personally affected by the health crisis, revealing that his 95-year-old great-grandmother suffered with the disease, partially prompting his decision.

The entire AS Monaco team is in talks with management regarding a 30% pay cut over the next four months in an attempt to help the Ligue 1 team’s financial woes that came about as part and parcel of the Covid epidemic. Fabregas has agreed to the cut in salary ahead of his teammates.

32-year-old Fabregas’s contribution alone come to an eye-watering €2.2 million in savings for his club.

He is at the heart of the negotiations between the players and the club, who initially wanted a 50% reduction in pay for all players. Fabregas has been working to get the two sides come to a 30% agreement, but so far this has no materialised.

Monaco have the second highest wage bill in their league coming in at €150 million a year, with only Paris Saint-Germain having a higher one. They also have a particularly large squad with 29 players on the roster.

Having no games will hit the club hard financially. With the announcement on Tuesday that the rest of the Ligue 1 games for this season are cancelled and that football will not resume until September, the club will be looking to cut budgets where they can.

When football returns in autumn, the Ligue will go directly into the 2020-21 season, and no clubs will be made to catch up on fixtures. It is still undecided whether the current standings will result in announcing the title to the current top teams or if the year will be called a wash entirely. France are the third major European league to cut their season short.