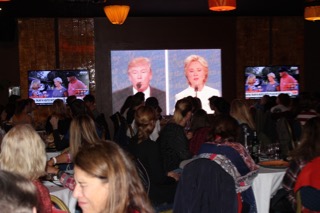 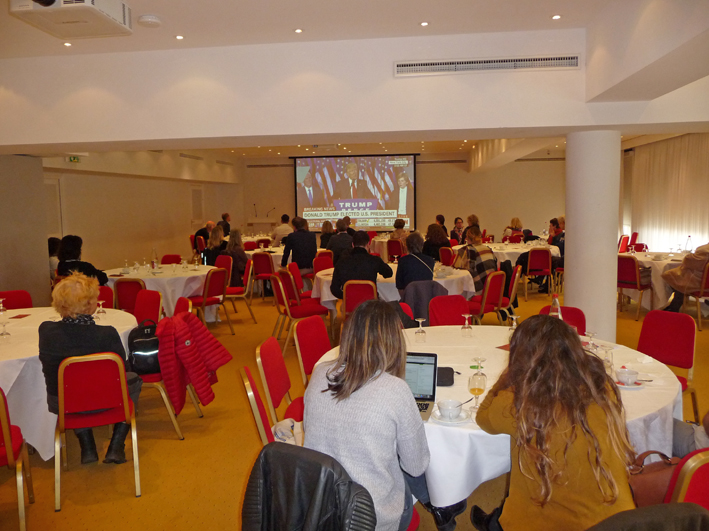 UPDATE 11 am: Just back from Democrats Abroad breakfast at the Negresco (there is no equivalent Republican organisation for expats), where shocked Americans arrived steadily across the morning, many to share their sadness and disbelief with fellow countrymen. Heads were lowered when the official announcement was made just before 9 am in Nice, and many tears shed.

“I had planned to return to the US in a few years, to raise my family,” one attendee told Monaco Life. “Now I can’t imagine I’ll ever go back. The US has become an embarrassment.”

Monaco Life wants to hear from Republicans and Democrats about your thoughts on this morning’s election results. Send your story to editor@monacolife.net

UPDATE 2:16 am: With Florida too close to call, I’m calling it a night. The brave souls left are wondering if Trump could indeed pull off an election victory. Good luck to Neils Brinelli from M6 who is hanging on until the official announcement some hours from now.

What an incredibly lively event this evening turned into. While Americans may be divided bitterly between the two candidates, the more than 100 people who gathered tonight at Stars’n’Bars in Monaco had animated and intelligent discussions about what the future might hold (and even talked politics!) all over the course of amazing Tex-Mex. Thanks to Annette (whom I leave entertaining the small crowd), Kate and all the staff who worked their butts off.

UPDATE: We are hearing about tampering with ballot boxes so while the partiers have moved on for the night, the die-hards remain at StarDeck, knowing it’s going to be a long night.

UPDATE: 00:12 am: First results coming in. I am shocked there were cheers. 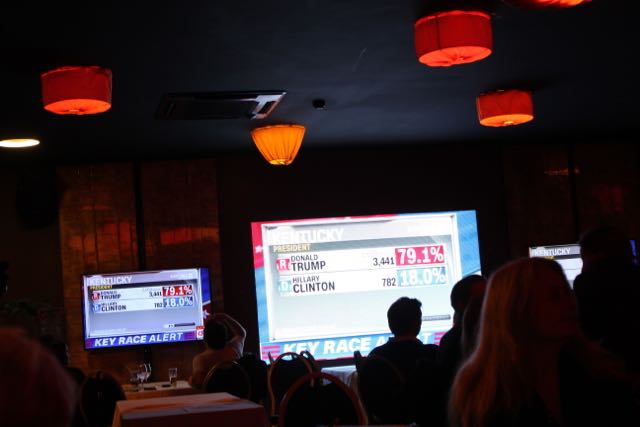 UPDATE: 11:30 pm: The room at StarDeck is thinning, although the volume is not, as some 50 anxious people keep one eye on CNN on the giant screen, with reports of early exit polls being delayed from “in five minutes” to in a few hours. 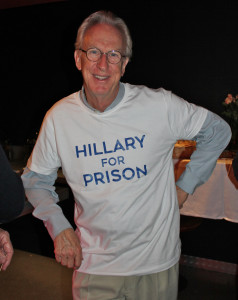 There haven’t been too many Trump supporters here tonight, although the President of MonacoUSA was sporting a “Hillary for Prison” T-shirt, but without too much comment on the possible outcome.

A CNN poll shows that 38% of voters are looking at the candidate who can bring change, while only 22% are casting a ballot for the candidate with most experience.

“I will be so embarrassed if Trump is elected,” one Clinton supporter told Monaco Life. “How did it get this far?” 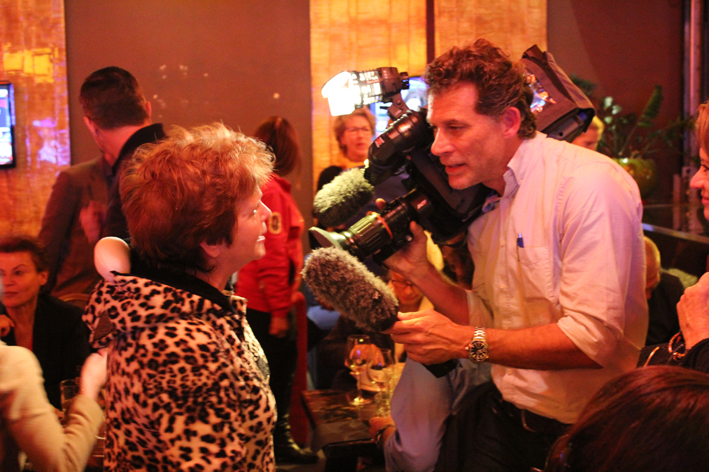 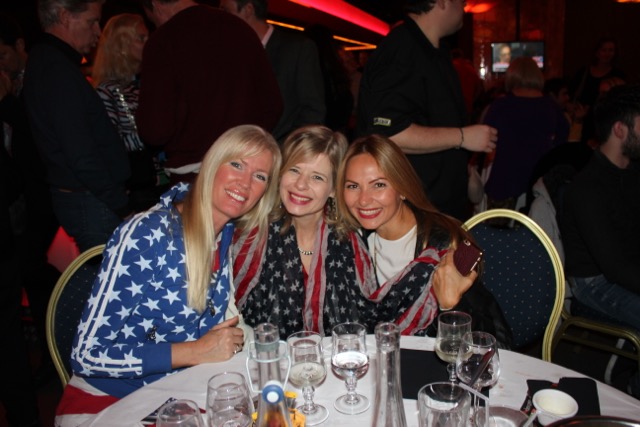 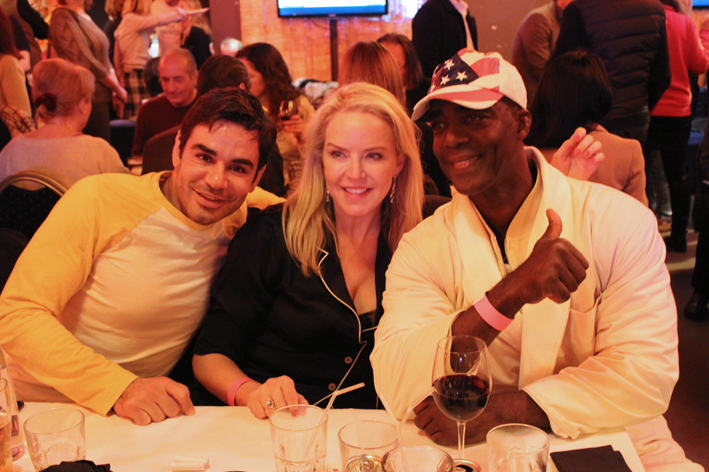 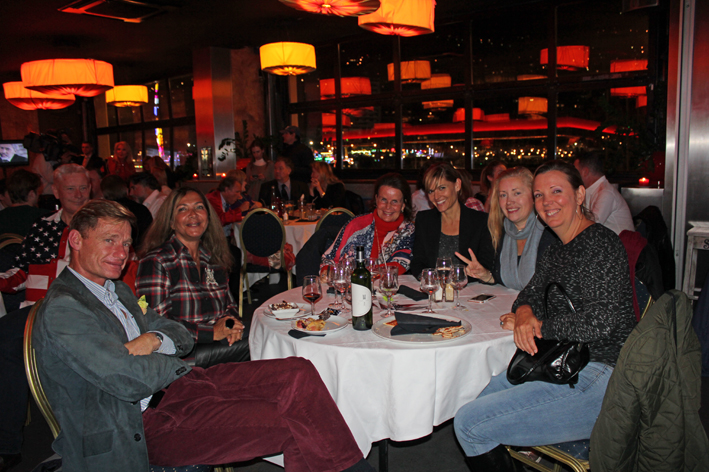 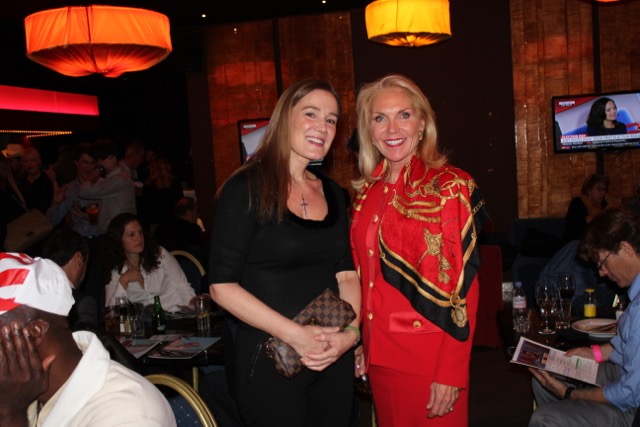 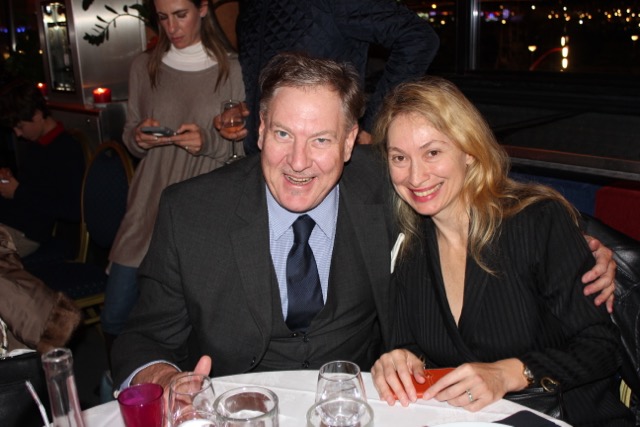 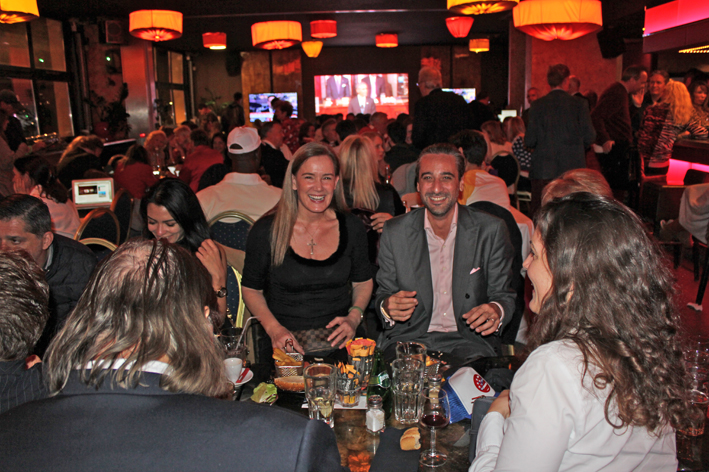 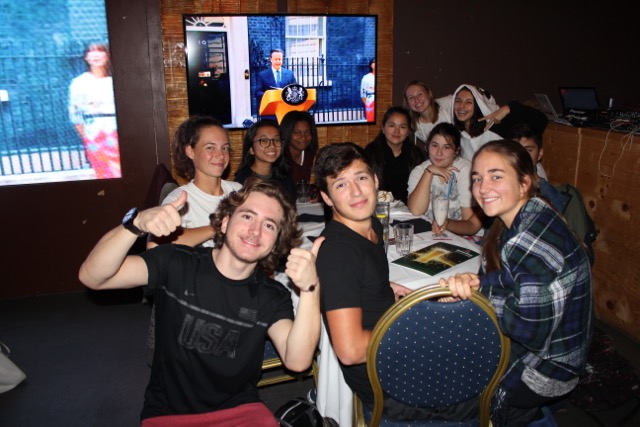 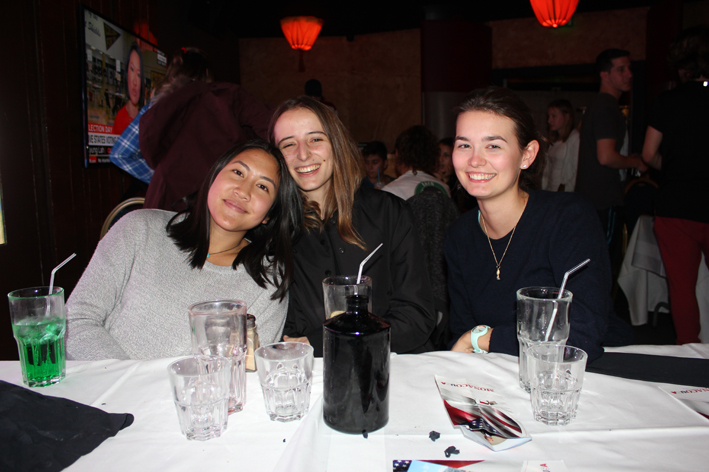 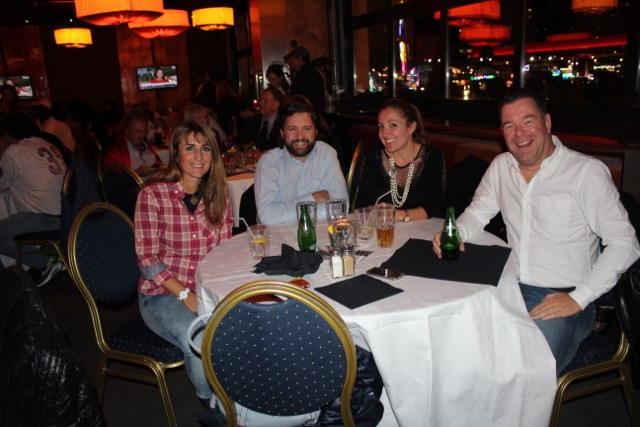 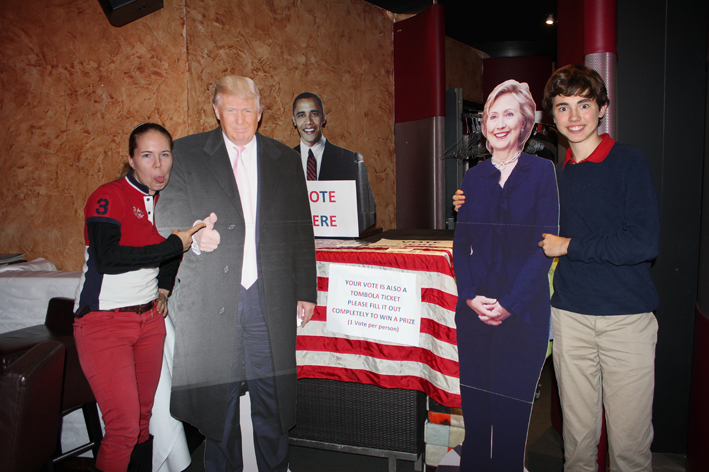 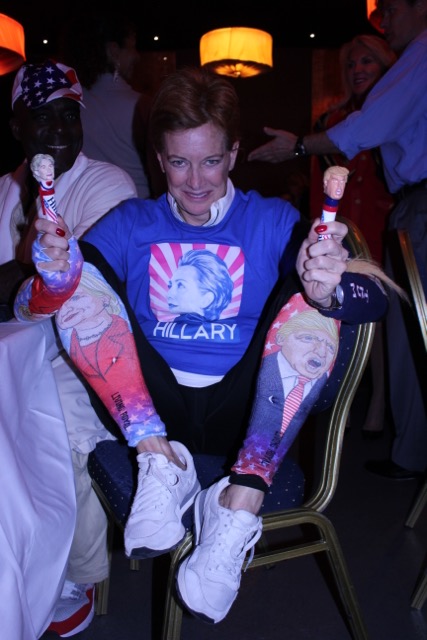 Weekend conversations across the Principality, and indeed elsewhere, were dominated by the neck-and-red-neck race to the White House, which will finally come to an end Tuesday, November 8.

MonacoUSA will show election coverage as it happens with voting results from the 50 states on a giant TV screen at Stars’n’Bars’ StarDeck from 7 pm and finish with breakfast at 6:30 am Wednesday.

All nationalities are invited to come by, entrance is free, to take a selfie with Hillary and Donald, take part in Kandidate Karaoke, and vote for their favourite candidate (disclaimer: voting in Monaco unfortunately will not be binding but voters can win a prize in a free tombola). Guests who come in their pyjamas (not obligatory) can also win a prize.

After midnight, there’ll be a live stream from Atlanta, Georgia, with MonacoUSA member Marco Orsini, founder of Monaco-based IEFTA, and fellow filmmaker Bilal Mekkaoui. The duo will present “Election Night Viewing Party” as they reunite guests after five years since filming “Dinner at the No-Go’s” for an exchange of ideas, opinions and arguments. (Facebook: Dinner at the No-Go’s.)

According to the US State Department, nearly 9 million American citizens currently live in foreign countries, so if “Abroad” was a state, it would be the 11th most populated. And the state of Abroad has one key voting concern this election, that’s FATCA, the Foreign Accounts Tax Compliance Act, which came into effect in 2010.

While Monaco Life reached out to both the Republican and Democratic parties for a comment on how this election could impact American expats abroad, we had only a reply from Amy L. Bondurant, a retired US Ambassador working as a volunteer on the Clinton campaign.

The former ambassador shared Hillary Clinton’s stand on FATCA, the implementation of which has caused “hardship” for many people, according to the Democratic Party nominee who has spoken to Americans living abroad.

“FATCA’s intent was to catch wealthy tax cheats hiding money abroad,” said Mrs Clinton. “But in practice, banks are refusing to provide average law-abiding Americans abroad the basic financial services they need because of the compliance requirements of FATCA.

“I support working out an effective same country safe harbour proposal and finding a solution that works to give relief to law-abiding citizens, without weakening our rules against tax cheats.

“I’ll work hard to fix this critical problem for you and for your friends and family working abroad, proudly representing our country around the world.”

What is FATCA?
American-born Jonathan Weiss has lived outside the US for 25 years. Residing in Switzerland for the last ten years, “out of the blue” he got a letter from his bank saying that “since I am an American citizen I had to file some extra paperwork. Two weeks later my bank account was frozen,” Weiss told the local press last year.

It took him three weeks to file the paper work and provide the bank with a letter of certification to have his account unfrozen. “It was scary,” he said. “People should be aware of FATCA and deal with it proactively so they don’t have to go through what I did.”

American Tax Consultant in France and American Club of the Riviera member, George Donnelly, explained FACTA as “a step towards clamping down on those who evade US taxation by investing overseas” that was enacted in the US on March 18th, 2010, with an effective date of July 1st, 2014.

There are two parts to FATCA, Mr Donnelly clarified: US taxpayers reporting of foreign assets and income on Form 8938 and the reporting of accounts by a non-US financial institution, otherwise known as a Foreign Financial Institution or FFI.

If you don’t otherwise need to file a tax return, then you are not required to file a Form 8938. But it is the second part of the form involving bank reporting that is resulting in a letter being sent to suspected US account holders requesting US taxpayer identification from FFIs.

Having been around since the 2011 tax year, the new Form 8938, Statement of Specified Foreign Financial Assets, requires disclosure of certain foreign assets and financial accounts. This is filed with the federal tax return. Although Form 8938 resembles the dreaded FBAR – the Foreign Bank Account Reporting, which looks only at bank account information – certain other non-account assets, such as business arrangements, are disclosed on the FACTA form.

The Treasury Department has negotiated a series of intergovernmental agreements with the tax authorities of other countries, such as France, Germany, Spain, Italy, Switzerland, Austria, Sweden, Denmark, and Norway, allowing them to act as intermediaries before the information is forwarded to the US government agency responsible for the collection and enforcement of taxes.

FATCA has become a model for other countries. The Organisation for Economic Co-operation and Development (OECD) is establishing the Common Reporting Standard (CRS) for international account disclosure. Some 44 OECD member states began CRS implementation on January 1st, 2016, with reporting commencing in 2017.

Last year, the US Treasury reported a record number of Americans giving up their citizenship – a figure of 4,279 – an increase of 20 percent over 2014, which was in itself a record-breaking year (in 2010 the number was just over 1000). The renouncement statistic may not be officially linked to FATCA, but for many ordinary Americans living abroad who’ve been denied access to basic banking facilities because “banks would rather refuse US citizens’ custom than run the risk of hefty penalties”, the law is grounds for a nationality divorce.

Whether the 45th President of the United States is willing to find a solution to this problem remains to be seen but one poll indicated that 28 percent of US citizens intend to move to another country if Donald Trump is elected president.

A note to Americans living in or visiting Nice, Democrats Abroad is hosting an Election Watch breakfast at the Negresco Hotel from 6 am to 11 am on Wednesday (reservations: €15/person).

Generations Day: bringing the generations together

Local News Staff Writer - May 5, 2019
A Casa d'i Soci has hosted Generations Day on Friday 3rd May, a day of intergenerational exchanges created by the students of FANB.

Local News Staff Writer - April 14, 2019
His Excellency Mr Edi Rama, Prime Minister of Albania, made a two-day official visit to the Principality of Monaco on Tuesday 9 and Wednesday 10 April 2019.