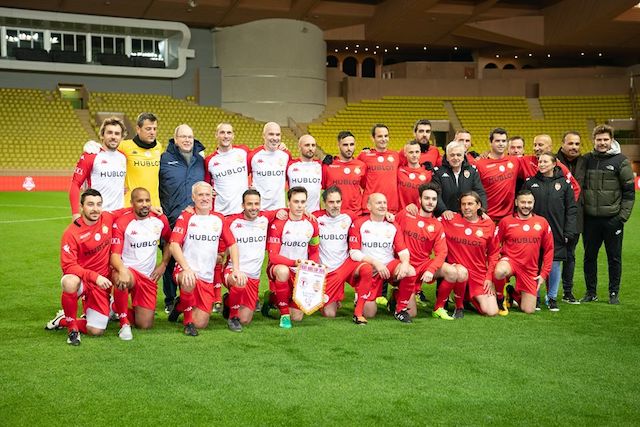 The first edition of the Fight AIDS Cup, a charity football event organised by Louis Ducruet and Romain Goiran, saw a turnout of nearly 600 fans, a handful of ex-AS Monaco players and the first ever defeat of the Barbagiuans by the Circus Team.

It was a hard-fought game between two worthy teams. One, the SAS Princess Stephanie sponsored Circus Team, the other HSH Prince Albert II’s Barbagiuans. At the end of regulation play the score was a draw at 1-1, so to determine the winner, a penalty shootout ensued giving the 7-6 victory to the Circus Team for the first time in nearly a decade.

But in the end, the main aim was not winning – it was about supporting a worthy cause and having a bit of fun. Former football legends Didier Deschamps, Sebastien Squillaci, Patrick Vieira, Gaël Givet, Adrea Raggi, William Gallas, Olivier Dacourt, Manuel Dos Santos, Ludovic Giuly and Sébastien Frey all came out to show support and ultimately upped the attendance. A special appearance by the only woman on the pitch, Laure Boulleau, former PSG player and now Canal + pundit, rounded out the event.

Princess Stephanie, President of Fight AIDS Monaco, was delighted with the turnout and as well as thanking all the participants who took the time to come out, praised her son for organising such a successful event.

The event was so well-received, in fact, that plans for the second edition are already in the works.