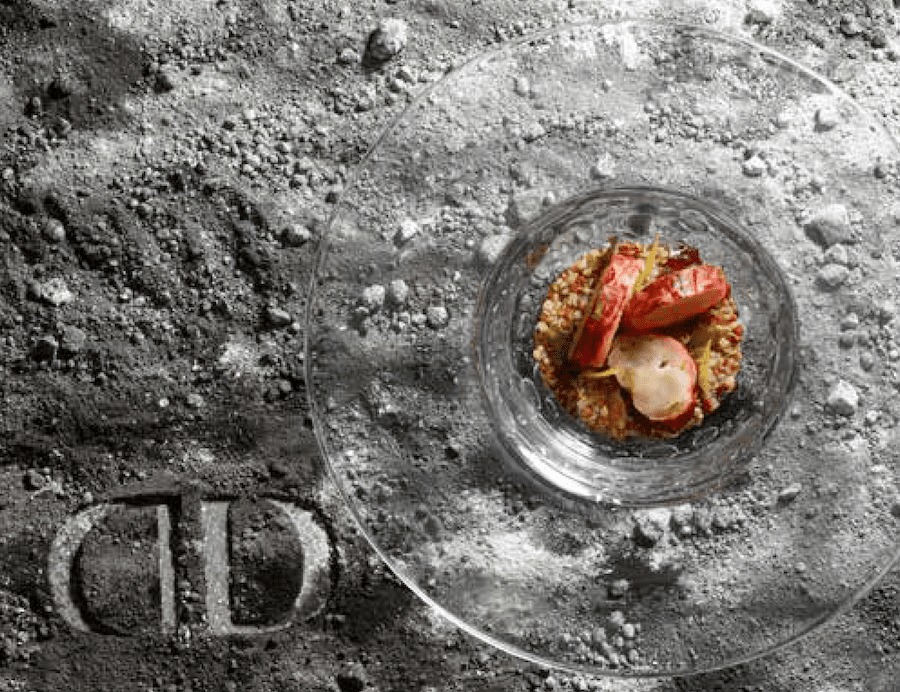 When French astronaut Thomas Pesquet went up to join the crew on the International Space Station last week, he took with him gastronomic meals created by the chefs of the Ducasse Council. This is what fine dining looks like in space.

The Ducasse Council and the National Centre for Space Studies (CNES) via the Centre for Assistance in the Development of Activities in Microgravity and Space Operations (CADMOS) have been teaming up since 2004 to create a range of meals for astronauts to take with them on space missions to enjoy on special occasions.

Called the Special Event Meals-SEM programme, internationally certified French meals are launched into space with astronauts, giving them treats to look forward to as an occasional alternative to the daily fare provided by the Russians and the Americans.

On the menu for this mission are meals that would make any foodie drool. Buckwheat in tandoori, radishes and baby onions; cod with Camargue black rice and piquillos; Breton lobster, organic quinori with seaweed and lemon sauce from Menton; Burgundy-style beef cheeks, carrots and mushrooms; Clafoutis with pistachio and morello cherries; and morsels of melting apples are some examples of the fare.

In all, 92 dishes are provided for the six-month mission. Life in zero gravity provides certain constraints, such as special manufacturing processes to preserve both taste and nutritional values, which are stored in a lightweight metal containers.

In 2020, 10 vegetarian choices were added to the menu to bring the grand total of choices up to 40 recipes.

Food safety is naturally a preoccupation for the chefs, second only to the flavours of the meals. This, for the last decade, has been taken care of in Pouldreuzic, a town in western Brittany, by Jean Hénaff of the Jean Hénaff Research and Development Lab whose expertise lies in ensuring the meals are safe, healthy and well within the guidelines set out by the United States Department of Agriculture (USDA). The facility works closely in conjunction with CNES and the Ducasse Council.

The six month process to see if a meal passes muster starts with the Ducasse Council, who develop the recipes in their own labs. The meals are then sent to Henaff’s facility to be prepared for sending and tested to find the perfect balance between something that seems like a pre-prepared canned dish and a home-cooked meal. The dishes are then tested under real conditions at food replenishment cycles at the space station.

Giving the astronauts the proper amount to nutrition is a tricky act, as definitions of “food” differ from person to person. Food choices and availability can have both physiological as well as psychological impacts on the crews. Muscle atrophy, decalcification, immune system deficiencies and cardiovascular problems are very real concerns, as are less severe conditions such as stress, nausea and relational imbalance.

The result is an effort to determine an accurate and comprehensive assessment of the long-term macro and micro-nutritional consequences of the space environment of astronauts and, on the other hand, increased consideration of possible psychological problems of the crew. These studies will eventually assist in how to best treat astronauts who go on extremely long-term missions.

Local News Stephanie Horsman - July 29, 2020
The karting season has resumed in the Principality, only this summer the track has been set up in its winter location under the Oceanographic Museum.