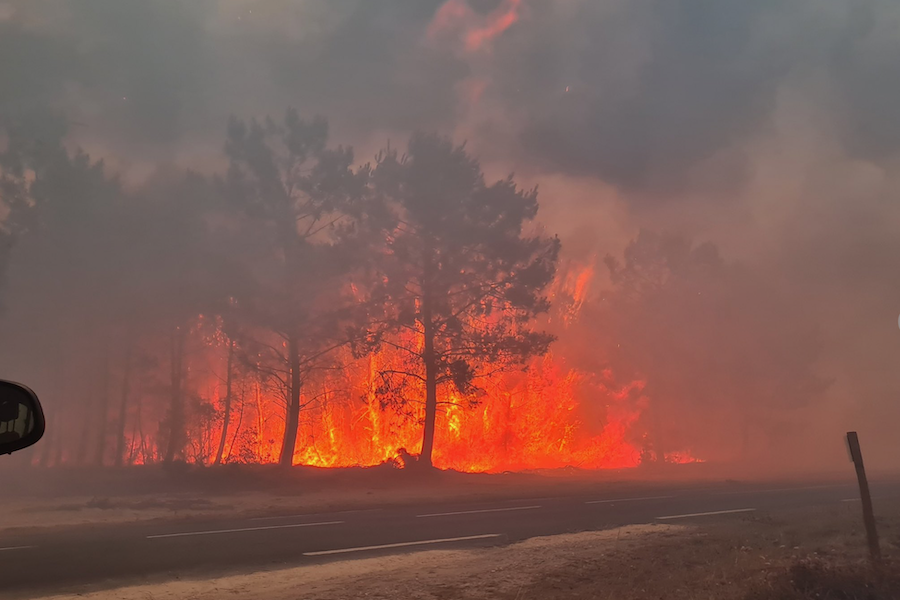 The catastrophic fire burning through Gironde in the southwest of France for nearly a week has regained intensity as the country endures a “heat apocalypse”.

Heatwaves have become a summer rite of passage in Monaco and France, with each year bringing record temperatures and high heat warnings, making life uncomfortable at best and deadly at worst.

The southwest and west of France have been particularly hard hit by this latest heatwave, with 15 departments under a “red vigilance” warning, the highest level attainable.

With intense heat there comes dry vegetation, making fires a real probability. This has been the case in Gironde, where 14,000 hectares of land have burned since last Tuesday and thousands of people have been forced to flee their homes. So far, more around 16,000 tourists and residents have been told to pack up and get out.

In Teste-de-Buch, “the situation is deteriorating”, says the prefecture in a Tweet. “The fire has reached the sea and is heading south”.

Social media is abuzz with eyewitness video and photo accounts of the fire which ravaged Lagune Beach, south of the Dune du Pilat. Flames 30 metres high are being seen, a terrifying sight and a horrific tragedy.

The Ministry of the Interior announced via a press release that reinforcements were on their way and that three additional planes would join the six bombers already engaged. It also sad that 200 additional firefighters with 11 trucks were being sent to join the 1,700 on the ground.

“Big resources are being deployed in the area. However, the fire should not reach the Landes department because the wind should turn towards the west and the north”, said AFP lieutenant-colonel Arnaud Mendousse.

As if the fires weren’t enough, the heatwave is meant to peak by midday on Monday, making the fire brigade’s job all the more dangerous.

A total of 51 departments, including the Alpes-Maritimes, and by extension, Monaco, are under orange alerts, with temperatures hitting 35º-36º inland and 31º-33º at the coast. Orange alerts mean people should be “very vigilant”.

Additionally, the high heat is bringing high levels of air pollution to the Provence-Alpes-Côte d’Azur region according to Prev’air, the national air quality forecast centre.

France isn’t the only country suffering with the heat. All of Western Europe is feeling the brunt, with forest fires also raging through Portugal and Spain. The UK has also been issued a red alert for extreme heat for the first time ever, with temperatures topping out at 36º in the southeast on Tuesday.