Home Travel First annual Corfu Challenge, winner Proteus “can pretty much do anything”

First annual Corfu Challenge, winner Proteus “can pretty much do anything”

Across July 3 to 8, the first annual Corfu Challenge was held. At its conclusion, George Sakellaris (owner of two of the competing yachts) and Team Proteus, were the 2017 Corfu Challenge winners.

The last race was held on Saturday, and spectators were delighted to watch the exciting pre-start match racing that played out. Conditions started out lighter than previous days, 12 to 16 knots from the northwest. When asked about the team’s pre-start plan, Proteus strategist Tommaso Chieffi explained, “Initially we decided to match race MOMO, we knew if we didn’t they would come after us. There was a lot of action because aside from us, Cannonball was going after Bella Mente to race for third.”

He expanded on the exciting start, “The great thing about this boat is they are so manoeuvrable and light, and with the large number of crew you can pretty much do anything.”

The race seven winner was Hap Fauth and team Bella Mente followed by MOMO, Proteus, Evniki and Cannonball. Rolex, the Official Timepiece, congratulates all teams for completing the first ever Maxi 72 regatta in Greece.

My friend George owns two of the yachts in this regatta, one captained by him (Proteus) and the other by his daughter. I also know Hap Fauth the owner of Bella Mente. I was fortunate enough to go out with Hap on his old yacht ‘Whisper’ in several of the St Barths Bucket Race Regattas over the years. The full sails are just so beautiful, and when racing on the Med with the spectacular vistas, it is just too beautiful.

It was the first-time a group of young sailors and with a female captain, Christine Sakellaris (under the guidance of veteran professionals), racing Evniki, were involved in a world class Maxi 72 event. Over the course of the week, the team was immersed in the daily grind amongst some of the highest-level sailors in the world.

Evoking a modern renaissance of sailing’s oldest Hellenic traditions, the Corfu Challenge has generated great enthusiasm throughout the competitive sailing community and has been included in the 2017 Maxi 72 Overall Trophy.

“What has made the Corfu Challenge different than any other regatta is the heart, passion, and warm generosity of everyone who came together.” Cathy Sakellaris thanked everyone involved and especially mentioned the organising committee. From day one, committee members continued to give and asked for nothing other than to promote the sport we are all passionate about! Awards were given at the Museum of Asian art at the beautiful Palace of St Michael and St George in the heart of Corfu.

In addition to the hand crafted first-place trophy, a perpetual trophy was introduced in honour of George Coumantaros, an internationally-renowned businessman and veteran ocean racer who passed away in Athens, Greece, on October 17, 2016.

This year it was given to all Corfu Challenge Maxi 72 owners to signify the high level international racing showcased throughout the week.

Many of these superyachts are on to the next regattas at Cops del Ray in Palma at the end of this month, World Championship in Sardinia in early September and Malta’s Mid Sea Sailing in the middle of October.

Italian rail service Thello has announced the end of service between Milan and Marseilles in 2021 due, in part, to reduced passenger numbers since the onset of the Covid crisis.

People travelling from Monaco to Italy for quick trips will not be required to produce PCR tests, however passengers flying out of Nice for longer periods will be subject to the new rules.

Travel Staff Writer - October 8, 2018
The representative office of the Monaco Tourism and Convention Bureau in the United States has received three awards in the field of Business Tourism 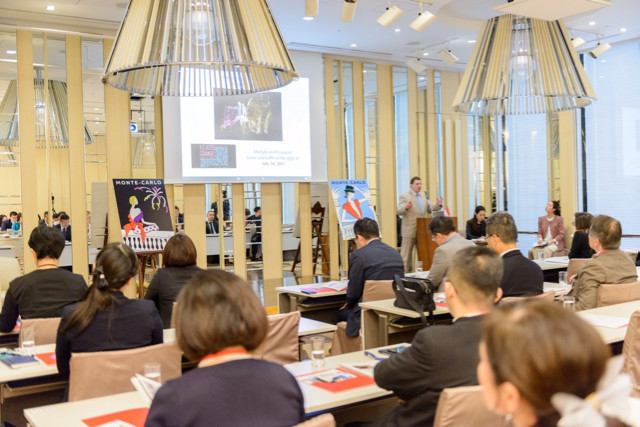 Photo: CD[/caption] Monaco’s Tourism and Conventions Office (DTC), and hotel partners Fairmont Monte Carlo and SBM, have enjoyed excellent road shows in Tokyo and Osaka. The visit also marked the opening of the new representative office in Japan and more than a hundred tourism professionals and journalists were invited to the various events organised for Monaco by the Candlewick Company. Two expert figures from the Principality took part in the debates, gastronomic journalist Takanori Nakamura and Yumiko Itakura, a journalist for Elle magazine and a well-known blogger in Japan. Through their testimonials guests were able to discover the Principality in a new and rejuvenated light. A first dinner was organised in Tokyo at the Benoit restaurant of Alain Ducasse in the presence of lifestyle media such as GQ, Leon, Brutus, Le Figaro, Katei Gaho and Harper's Bazaar: Guillaume Rose for the Tourism Department, Koji Ito for Fairmont and Hiro Ito for the SBM were able to answer the questions put to them by journalists. Numerous articles were published immediately and a survey carried out by the DTC following the visit showed that the Japanese remain very interested in Monaco as a destination and its many advantages, especially the luxurious environment, security and quality of service. Guillaume Rose also presented the latest Monegasque novelties at a lunch for high society of Osaka, gathered as part of the Monaco-Japan Friendship Club.