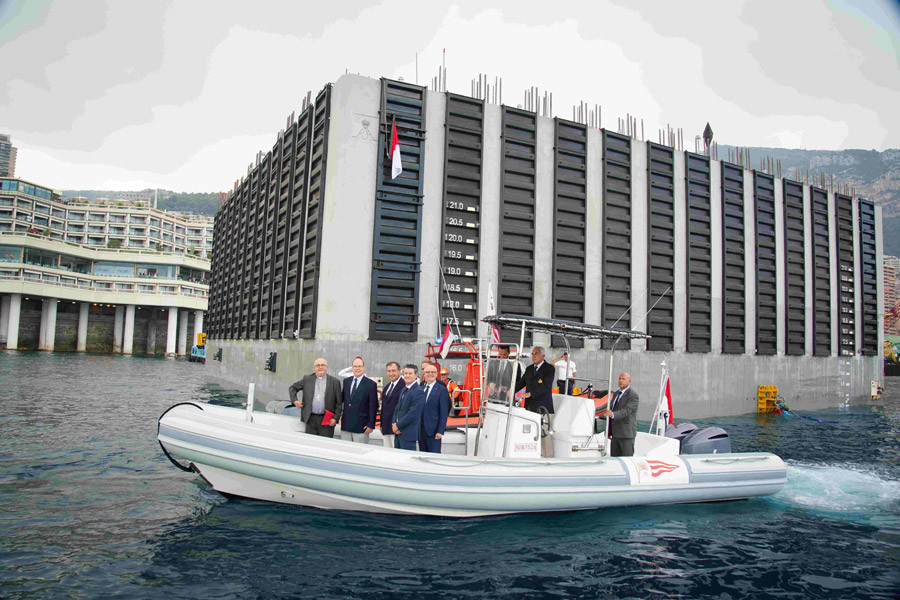 The symbolic unveiling of the first caisson of the Portier land extension project on Thursday night marked a major step towards the realisation of the ambitious project that will involve increasing the land area of Monaco by six hectares.

Many guests were invited by SAM Anse du Portier, which is directing the project, to attend an unveiling in the presence of HSH the Sovereign Prince on board a launch. He was accompanied by Andrea Casiraghi, Martin Bouygues, CEO of Bouygues, Guy Thomas Levy-Soussan, Managing Director of SAM L’Anse du Portier, Serge Telle, Minister of State, and Monseigneur Barsi, Archbishop of Monaco, who blessed the structure.

The ceremony marked the first visible step in what represents an emblematic project for the Principality, the Government said. Seventeen other caissons will join the first one over the next 12 months, to form a protective belt designed to counter the effects of sea swells. The maritime infrastructure will be fully completed by 2020.

The land extension will cover 60,000 square metres, and will include a public park of one hectare, 3,000 square metres of shops, a 9,000 square-metre extension to the Grimaldi Forum, a port, housing, offices and more public facilities, including a 160-space car park.

Some of the fires that devastated large areas of countryside along the southern Riviera last week were, according to police sources, set deliberately. Two teenagers, one 16 and the other 17, were arrested in possession of matches, lighters and binoculars on Wednesday and were still in custody in Martigues, near Marseille, at the end of the week. One other person, arrested in relation to a fire in Peynier, near Aix-en-Provence, also remained in custody, while two others had been released. Negligence, such as the careless discarding of cigarette butts, has also been blamed for some of the blazes. Gusts of wind have kept some of the bigger fires burning, according to Lieutenant-Colonel Michael Bernier, the civil security officer leading the fight against the worst blaze, at Bormes-les-Mimosa, which resulted in 12,000 people being evacuated, hundreds of holidaymakers spending the night on the beach and a total of 7,000 hectares burned overall. Later in the week, flare-ups were also reported at Carros, near Nice.

Local News Staff Writer - August 17, 2018
The 88.5-metre superyacht Illusion Plus is heading to Monaco via Shenzhen in time for the Monaco Yacht Show, according to Superyacht Times.