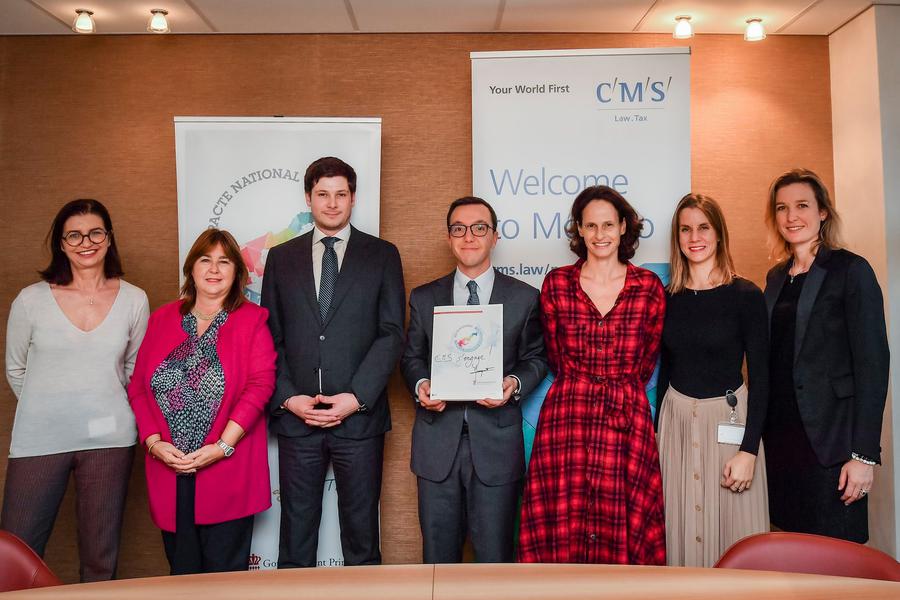 Pasquier, Ciulla, Marquet & Pastor is officially the first Monaco law firm committing itself to the National Pact for Energy Transition.

Earlier this week, Managing Partner Olivier Marquet signed an agreement at the firm’s new offices in the presence of Marie-Pierre Gramaglia, Government Counselor-Minister of Equipment, Environment and Urbanism, Annabelle Jaeger-Seydoux, Director of the Mission for the Energy Transition (MTE) and her team, as well as Associate Attorneys of the Cabinet.

On behalf of his partners and staff, Maître Marquet expressed his pride at being a trailblazer and said he knew his colleagues were as sensitive to the matter as he personally was.

Ms Garmaglia congratulated the firm on their collective commitment and stressed how important adhesion to the pact by everyone was in order to meet the goals set out.

Pasquier, Ciulla, Marquet & Pastor has long been implementing measures within the guidelines of the Energy Pact such as telecommuting when possible, installing a water fountain, digitalising documents and repurposing out of date envelopes and letterheads to create notebooks, but felt an official signing would send a signal that their commitment was now binding. Their hope is that others will follow suit.

Starting in 2020, associates at the firm will receive representatives from the Mission for the Energy Transition team who will offer an awareness session in an effort to bring everyone up to speed on the latest information as well as ensure the whole office is on the same page.

The National Pact for Energy Transition is the Prince’s government programme that aims for the Principality to obtain carbon neutrality by 2050.

The Principality has welcomed four new Ambassadors from China, Brazil, Montenegro and Serbia.

Health and security were the main topics discussed at the recent Franco-Monegasque Joint Social Security Commission, including health care for workers in Monaco, the implementation of telework and the sharing of electronic medical records. 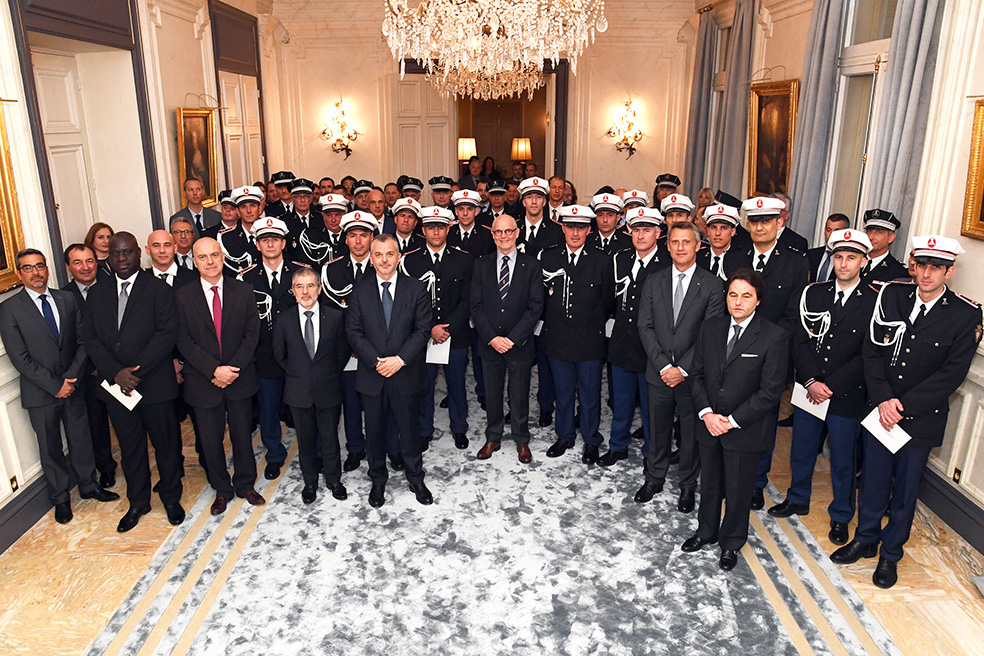 Photo: Manuel Vitali/Direction de la Communication[/caption] Serge Telle, Minister of State, recently presented letters of congratulation to a number of police officers who have been involved in incidents during which they acted with exception devotion to duty. "I am especially pleased that we all pay tribute to those who ensure our daily security, with determination, courage, and talent. Security is the first of our freedoms. It is freedom that ensures our social contract. It is the guarantee of our future,” Minister Telle said during the ceremony at his residence. The actions of the police officers will also be recognised during the next national holiday, at the request of the Minister of State. On September 18 last year, four police officers prevented a person from committing suicide on Boulevard du Larvotto, while on December 22, 2016, fourteen police officers intervened during the hostage-taking and attempted robbery at the Graff jewellery shop in Monte-Carlo. Their prompt actions allowed them to intercept the robber before he could leave the Principality. HE Serge Telle also wished to associate with this event the security officer of the Monaco Sécurité Privée company, who sounded the alert. Finally, Minster Telle said that the Government had decided to improve working conditions for the police service with a  revaluation of night hours, and to give the Directorate of Public Security new resources and material in 2017.

ML: Can you give us some background about Les Enfants de Frankie? JS: The association was created in 1997 to help children from in and around Monaco suffering from severe illnesses, and various disabilities. Frankie is a clown who comforts to children in need. ML: Can you give us some key facts and figures? JS: The association receives requests from about 20,000 children per year via more than 200 structures (Social Services, Medical Education Institutes, Hospitals ...) and relies on more than 100 volunteers and over 350 members per year. Every year, the association organises Frankie's Christmas for thousands of children, about 50 outings and workshops, some 20 specific projects and around ten residential group trips. ML: What activities do you organize for children during the year? JS: We visit hospitals in the region. Our volunteers read to bedridden children, play games or arrange small creative workshops. We have more or less the same annual program, focusing on the events of the Principality, such as the Circus Festival, New Generation, Rolex Tennis Masters, Formula 1 Grand Prix, Football Matches, the Film Festival. We also try to innovate, for example, through sports events like tennis, volleyball, rugby, or through educational outings – visits to the Lerins islands, outings with themed workshops (say, the protection of the environment), on sail boats, or to botanical gardens ... ML: What are the association’s main fundraising events? JS: Our annual Charity Night – “Kids Nite” – invites families in Monaco and the region to take part in a gala evening specially organised for their children. This year, this takes place December 16. Monaco Red Nose Day (which was December 6) encourages the townspeople and workers in our Principality and neighboring towns to buy a Red Nose to show their support for children in need in our region. These are both held under the High Patronage of HSH Prince Albert. Generous benefactors also make occasional donations or become partners by actively participating in one of our events.

ML: I read that the association bought a minibus for the psychiatry and autism service at the Antibes-Juan-Les-Pins hospital. How are funds spent? JS: The funds raised during donations or our annual Gala Evening help cover the costs of our different events and activities, such as: - Frankie's Christmas, an annual show with gifts and a tea party for thousands of children. - Specific projects, like bathroom renovations for children with severe disabilities. - Playground facilities for children placed in a home for their protection. - Equestrian therapy activity for children with autism. - A vegetable garden for sick and disabled children. - Tickets for outings to the Monte-Carlo International Circus Festival, for example, or a helicopter flight, Farm Day, etc. - Workshops on biodiversity, respect for the environment and recycling as part of the United Nations Programme on sustainable development. ML: Can you tell us a little more about the creation and implantation of the Child’s Rights Fountain in the Principality? JS: The Universal Child’s Rights Fountain, which is set in the landscaped grounds of Fontvieille, was inaugurated on November 20, 2000, by Prince Albert II as part of the Second Day of Human Rights of the Child. Made of travertine marble by Italian sculptor Franco Maschio, it was offered to Monaco by the Association Les Enfants de Frankie. The clown character is the ideal metaphor to address both children and adults as it is apolitical and does not distinguish between races and religions. The clown is surrounded by five children, a symbol of the five continents, and the water, the ultimate symbol of life, flows over a plaque on which the Rights of the Child are engraved, and stones signed by 40 of Monaco’s celebrities. ML: There’s also something called a Dream Mission? JS: This magnificent project took the team and sponsors a whole year to make the dreams of 56 hospitalised children come true. The dreams of these children, from the simplest to the most extravagant, ranged from a wish for a box of paints or a football to meeting a Formula 1 driver or football player in Brazil, and from meeting the Sovereign Prince in his Palace to simply seeing Santa Claus’ reindeer in Iceland. Some were even able to the other side of the world on a safari or watch the shooting of the film “Dinotopia”.

ML: Frankie also has 12 renowned Ambassadors, one for every month of the year? JS: Frankie has appealed to the generosity of twelve illustrious women known around the world, with their 12 foundations in 12 different countries, to help him carry out a major project for chldren. For example, a circus in Africa, a magical day in a Princess’ Palace, or videoed school courses for bedridden children. ML: Can you tell us about the association's structure membership? JS: The association has been recognised as an NGO since 2008 and has the Consultative Status of the Economic and Social Council of the United Nations. It is made up of a team of five people, our Founding President and volunteer, Mrs Francien Giraudi, our volunteer accountant and three full-time employees. We also have some 50 volunteers in the field. Members, who share the values of the association, are the soul of the association and with their annual subscription and their commitment we can continue our actions and regularly offer children new outings. And, of course, people can make a donation without becoming a member, either through our website or by post. ML: Does the association need volunteers? JS: As we are offering more and more activities, we are always looking for new volunteers, either for our weekly outings, or for the organisation of our major humanitarian events such as Frankie's Noel, which requires more than 80 volunteers. To become a volunteer, you do not need to be a member, it can be done by contacting the office or by filling out the registration form on our website, under “volunteering”. For more, see Les Enfants de Frankie website. Article first published on December 14, 2016. READ ALSO: The Charities of Monaco Life: Children & Future READ ALSO: The Charities of Monaco Life: Action Innocence