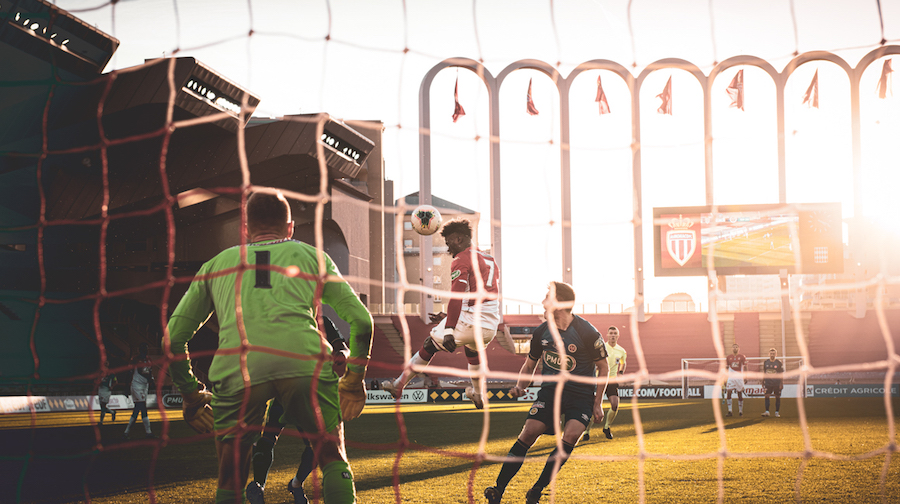 A double by Baldé, including a goal scored in the final seconds of the match, have given AS Monaco a 2-1 victory against Reims.
The first match of 2020 took place under brilliant sunshine on Saturday 4th, a game which was also the first for Robert Moreno and his staff at AS Monaco. The new manager put forth a daring 11, with a four-man back line and six offensive-minded players. From the start, the tenor of the match was clear. The Red and Whites monopolised the ball and faced a low and compact block from Reims. After two runs by Baldé on the left (3rd) and Golovin on the right (5th), Reims had the first real opportunity of the game. Oudin was on the end of a long ball and tried to beat Lecomte with a shot across goal that struck the upright.
But AS Monaco did not allow themselves to be destabilised by the “warning shot” and the response came three minutes later with a recovery from Ben Yedder, narrowly deflected behind for a corner by Reims (12th).
Moments later, as Monaco’s domination increased to a crescendo, Lemaître had to intervene on a shot from Gelson (21st), then another from Golovin.
The Red and Whites were able to hold possession in the opponents’ half and got another opportunity just before the break. Gelson put the ball in front of goal, and Baldé threw himself at it but could not turn it in. Foket averted the danger before the umpire whistled the end to a first period thoroughly dominated by AS Monaco.
It remained, however, up to the hosts to make the difference in the second half, which was approached eagerly by the players of Robert Moreno, who had three chances back to back just before the hour mark. Lemaître first made a big save on a powerful shot by Henrichs (55′), then deflected the ball away from Gelson on a cross from the right (57′). In the process, Ben Yedder tried a “Madjer” on a cross by Gelson, without success (58th). He then turned into creator in the 61st to play in Baldé in front of the Reims goal. The Senegalese’s header found the left corner of Lemaître’s goal, the keeper stranded helplessly as AS Monaco opened the score (61st). It was a well-deserved advantage, but lasted only a short while, because Dia, who had come on in the 68th, equalised in the 69th on a beautiful bit of individual play.
It was back to the drawing board for the Red and Whites who were marking time, even if Munetsi happily blocked a powerful shot by Golovin in the 78th. Worse, the umpire whistled a penalty in favour of Reims in the 85th minute following a late challenge by Silva on Kamara. The match was close, but Lecomte blocked Doumbia’s effort and kept his team afloat. While additional time was already well underway and extra time seemed likely, AS Monaco made the difference in the last seconds. On a corner won by Gelson and taken by Golovin, Baldé scored the goal to seal the victory.
It was a thrilling end to this first game of the year and deserved qualification for Robert Moreno and his men. The coach told a press conference after the game that he was satisfied with the play of his team.
“I am very happy because we were able to see on the pitch what we asked of the team. It was important to win and important to me to see my team. I asked them to control possession, to recover the ball quickly, that’s what was done.”
He continued: “It is positive to see that after only one week of work that the instructions are being applied like this. This is a great message to have from the players.”