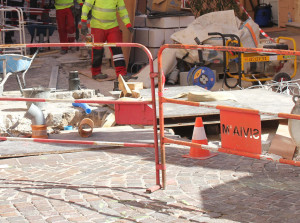 Five short-term road closures are due to take place between late October and November 10. In each case, the work will be carried out overnight to minimise inconvenience for residents and road users.

Parts of avenue Saint Michel will be closed from 8 pm on October 27 until 3 am on the following day, and rue Grimaldi will be closed during the same hours from rue Princesse Caroline to Place d’Armes.

In all cases, the work involves the relaying of asphalt.

Local News Cassandra Tanti - April 27, 2020
Monaco’s lockdown will be lifted in less than a week and to prepare, the government is equipping several stores in the Principality with masks that can be purchased by the public. 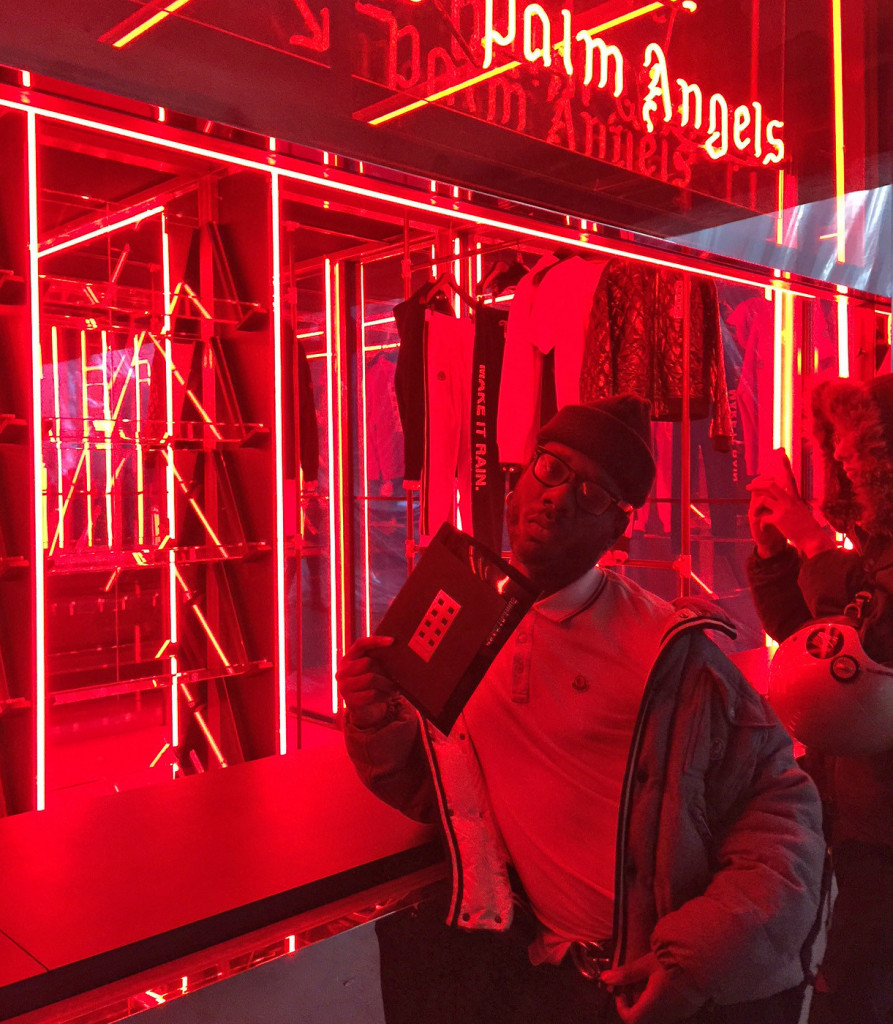 I’m back! Your ever on the scene Style Editor and I have been BUSY! Milan Fashion Week is finally over which means a much-needed full night of sleep is in my immediate future but not before I catch you up on what happened during this week of fashion shows, celebrity-studded front rows and late-night after-parties. On the night before the shows began, Moncler unveiled their much awaited “Genius Building”, a space to house collaborating designers whose collections will be available for purchase every month beginning this summer. A slew of international influencers and celebrities – supermodel Naomi Campbell, Stranger Things actress Millie Bobby Brown, Instagram stars Caroline Daur and Toni Mahfud and singer Justine Skye – were on hand for the inaugural private gala dinner in a gorgeous historic library. This was followed by a late night after-party at Apophis Club where Naomi Campbell danced the night way with hot young DJ, Argentina’s Babygirl spinning in the console. [caption id="attachment_28753" align="alignnone" width="742"] 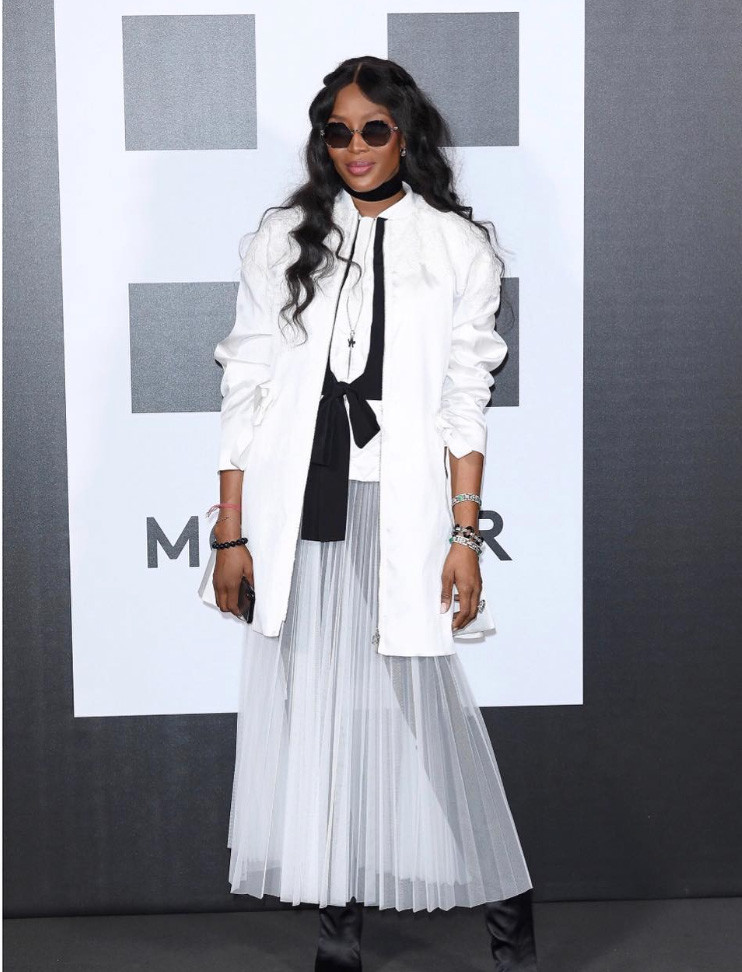 Photo: Instagram iamnaomicampbell[/caption] Day 1 The highlight for me was Gucci, who transformed its show into a hospital operating theatre where models walked down the runway carrying baby dragons, lizards and replicas of their own heads. The collection, of course, was amazing because the designer Alessandro Michele is a genius. [caption id="attachment_28754" align="alignnone" width="826"] 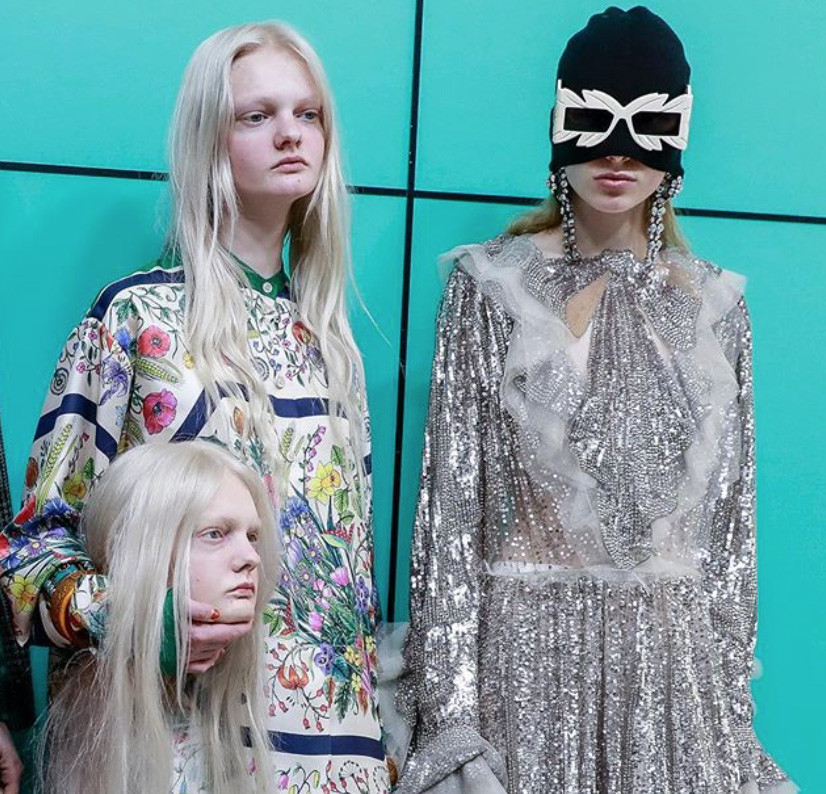 Photo: Instagram Gucci[/caption] On the Moschino runway, Jeremy Scott gave us a Jackie O-inspired collection with Kaia Gerber (Cindy Crawford’s daughter) opening the show. The Moschino after-party – with its open bar of Ciroc vodka and performance by Italian rapper Sfera Ebbasta – knocked out till the next afternoon. Day 2 All I cared about on Day 2 was Fendi and Prada. Fendi collaborated with Instagram artist REILLY, known for his satirical pop culture collages, for a Fendi-Fila mashup that had everyone talking. Prada unveiled a new show space, the 8-storey Fondazione Prada Tower, where outside large neon Prada signs lit up the dark night while Miuccia proposed a fluo-coloured freedom for women to feel safer without being bothered on such nights. I ended day 2 in bed with Netflix; my liver in an open rebellion against me. [caption id="attachment_28755" align="alignnone" width="640"] 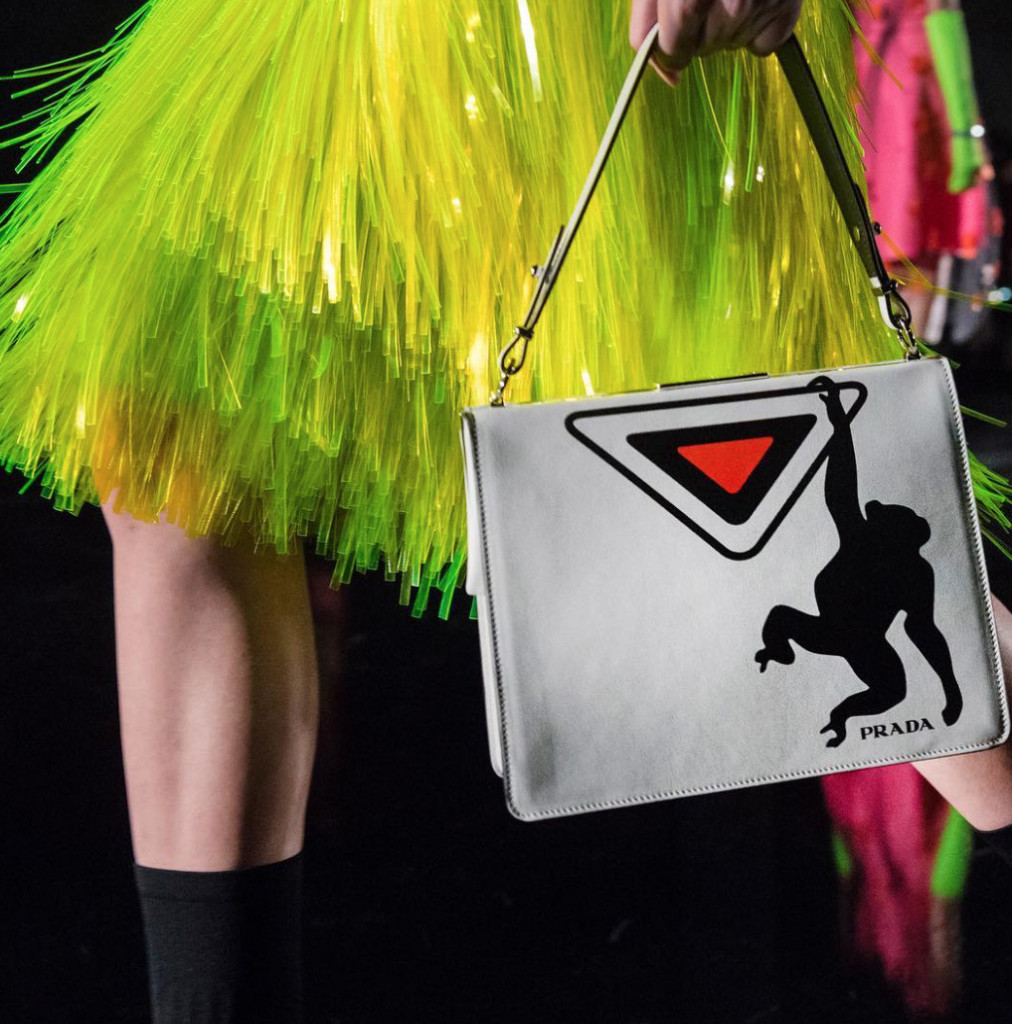 Photo: Instagram Prada[/caption] Day 3 Only had one name worth space in this piece and that name is Versace. Technicolor and tartan are on the books for next fall: who’s ready for their Cher Horowitz from Clueless moment? Side night I discovered an interesting little brand called Mua Mua Dolls, they had me at sequin covered trench coats and sparkling dresses emblazoned with “Too glam to give a damn” and “Think rich look poor”. It’s eco-friendly and they are promoting an initiative to keep plastic out of the ocean. I’m already looking forward to their upcoming menswear. [caption id="attachment_28746" align="alignnone" width="640"] 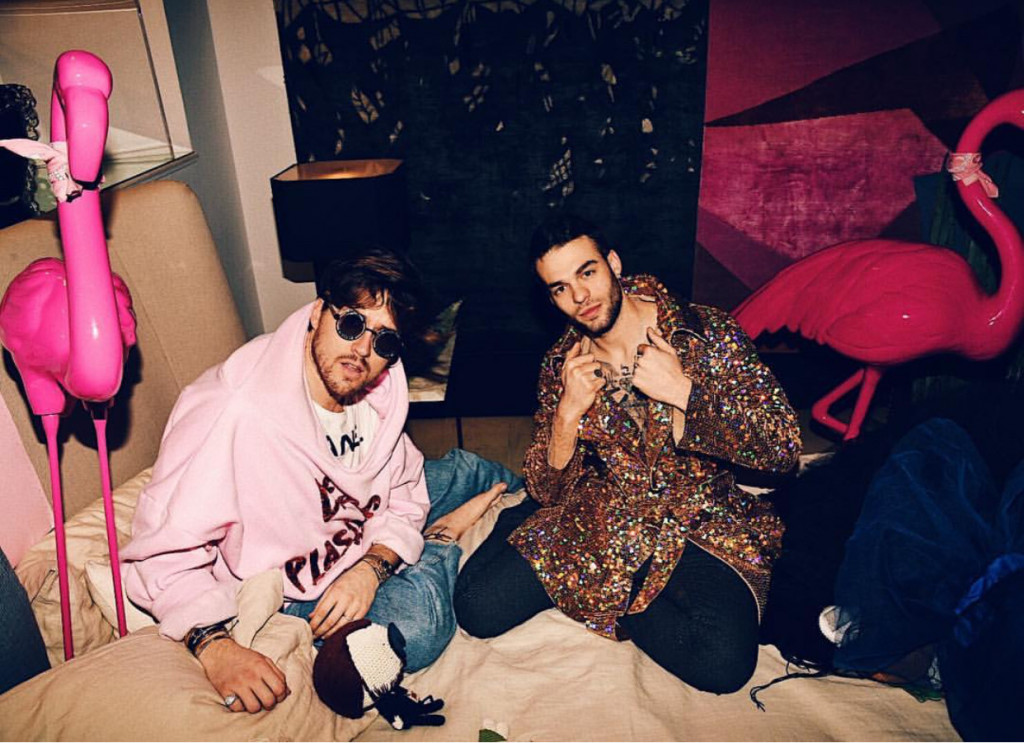 (Stylist Marco Ferra and rapper Gordon Ranzy wearing Mua Mua at the presentation. Photo: Instagram[/caption] I started another long night out with a stop to check out shoe brand VFTS at their event followed by La Martina’s polo party with a guest performance by Ne-Yo. The flashbacks to high school were in full . Day 4 Giorgio Armani staged a show, which, in his own words, was an “ode to coexistence”. Berets are still in fashion for another season. Over at Paul Andrew’s debut collection for Ferragamo, Big Little Lies star Shailene Woodley and Black Panther star Danai Gurira made a front row appearance. Comfort and tonal looks are what’s in store for the Ferragamo customer this fall. Over at Missoni, Angela Missoni was in the mood for easy luxury, nothing too fussy but still sophisticated and a bit kooky. On my way home from the shows, I stumbled upon the pop-up store for shoe brand Giannico, the brainchild of Nicolo Beretta that lit up the street with a glow from the pink splashed interior. Over on Via della Spiga, another shoe brand feted their new collaboration collection with architect Jean-Marie Massaud transforming their downstairs space into a nightclub with lasers, hip hop, free flowing Dom Perignon and Krug and caviar. Aigner Munich celebrated their new store opening with a huge party DJed by Matteo Ceccarini filled with IT girls Veronica Ferraro, Catherine Poulain, and Desiree and Jennifer Selmanovic comparing their Aigner bags over themed cocktails, and artsy light installations. [caption id="attachment_28747" align="alignnone" width="640"] 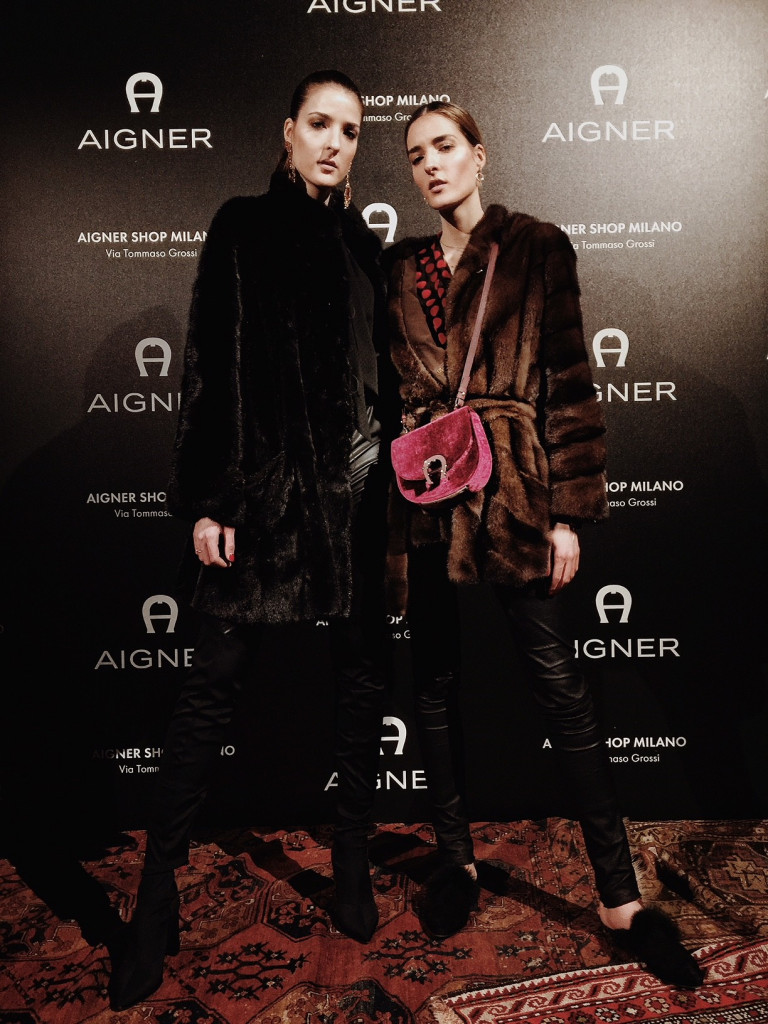 Desiree and Jennifer Selmanovic at Aigner. Photo: Louis Pisano[/caption] What everybody was talking about, however, was fashion icon Anna Dello Russo’s party in a palazzo that had been transformed on Corso di Porta Romana where she auctioned off her iconic wardrobe, starting with a catwalk that featured the Who’s Who of social media glitterati followed by an over-th- top sit down dinner and dance party. [caption id="attachment_28756" align="alignnone" width="640"] 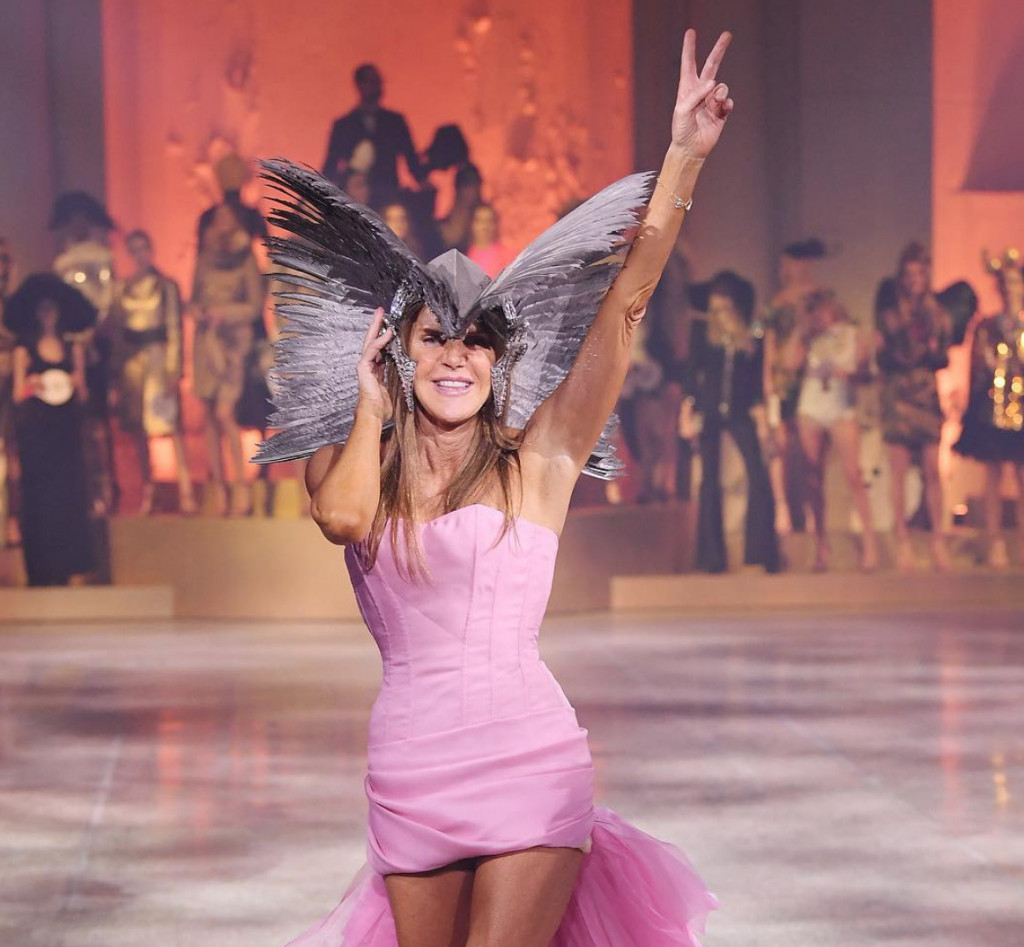 Anna Dello Russo. Photo: Instagram Tatler Magazine[/caption] As famous faces and boldface names left the unforgettable evening, the night raged on with more partying at VOLT club, where Giovanna Battaglia and Peter Dundas danced on tables. I made my way out because by that point, I’d fallen down and shattered my iPhone and probably kneecap (thanks you vodka). I passed Luka Sabbat on the stairs, we took a selfie. As I got into the car it started snowing. Day 5 On the last day (FINALLY), on 4 hours of sleep, I dragged myself to the Stella Jean show where she had me shaken with her heavily streetwear-influenced collection, something I didn’t expect would be in her repertoire but it was cute. At the Dolce & Gabbana show, drones flew purses around a show that was dedicated to love. In typical Dolce fashion, their was religious iconography, crowns, looks that veered towards carnival, and slogan T-shirts that will be a hit on Instagram. Clearly Stefano and Domenico know what they are doing. For the year ending March 2017, the brand recorded revenues of €1.3 billion. [caption id="attachment_28757" align="alignnone" width="640"] 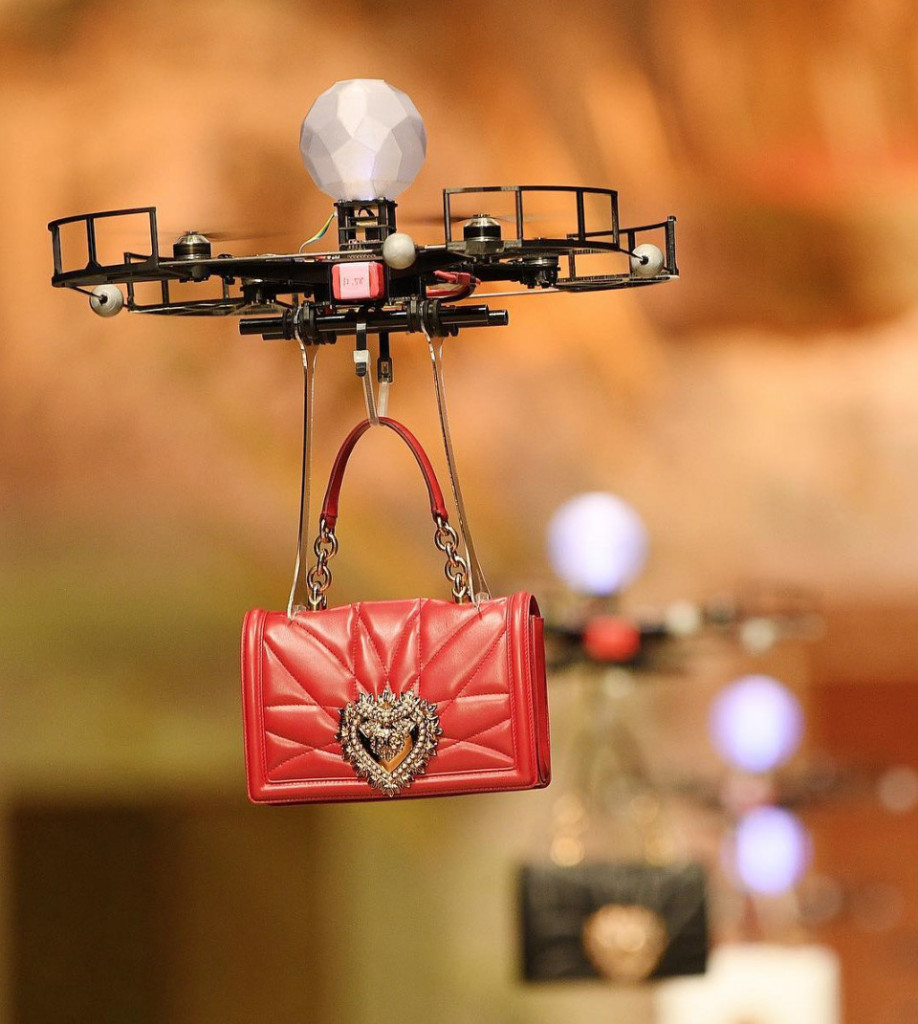 Photo: Instagram bazaaruk[/caption] The last show of fashion week was the much awaited and publicised Tommy Hilfiger extravaganza, the last part of his collaboration with model Gigi Hadid. The collection was shopped live during the show, as well as bought on sight. The venue was transformed into a huge race track with Formula 1 cars ... complete with Lewis Hamilton. The front rows were packed with celebrities, I can’t even begin to go down the list, it was outrageous. Backstage (thanks Riccardo Corti) the likes of Hailey Baldwin ran around posing for pictures, Youtube sensation Cameron Dallas jumped around, Lewis Hamilton and Tommy Hilfiger chatted, Golden Barbie pranced around. It was a scene. I ate some couscous in the corner. [caption id="attachment_28758" align="alignnone" width="640"] 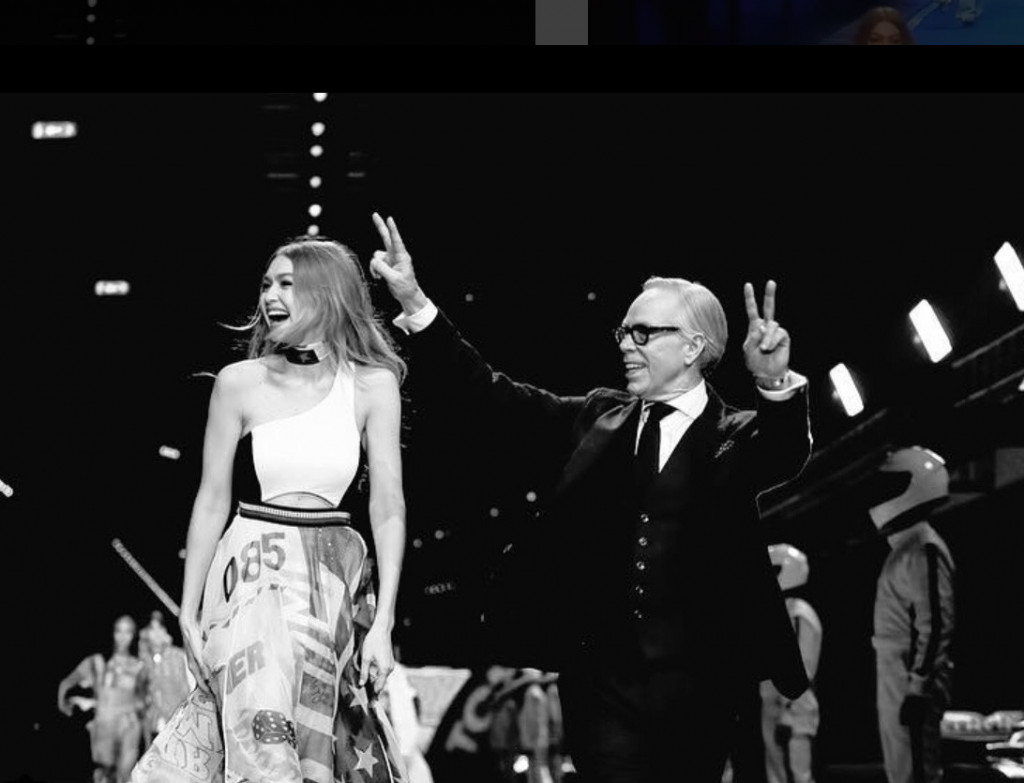 Photo Instagram Gigi Hadid[/caption] Before all that happened, I swung by Larusmiani where they were toasting their collaboration with Attico, a sumptuous and excessive brand headed by IT girls Gilda Ambrosio and Giorgia Tordini, it was a decadent little affair, champagne and gourmet popcorn, ostrich feathers and diamonds. Just down the street Roberto Cavalli was having a little do for their eyewear line. Some day I need to calculate how many glasses of champagne I drink in one day during fashion week. Later that night Fiat heir Lapo Elkann threw a party for his sunglasses brand, Italia Independent, and to cap off a long week Italian model and television personality Andrea Marcaccini had a very, very, very late night party at Volt for his brand. I don’t remember how I got home. Goodbye Fashion Week. See you in June. Instagram sensation and style blogger Louis Pisano writes SuperficialLivingDiary.com. Article first published February 27, 2018.