Formula 1 races back on track, almost

Formula 1 races back on track, almost 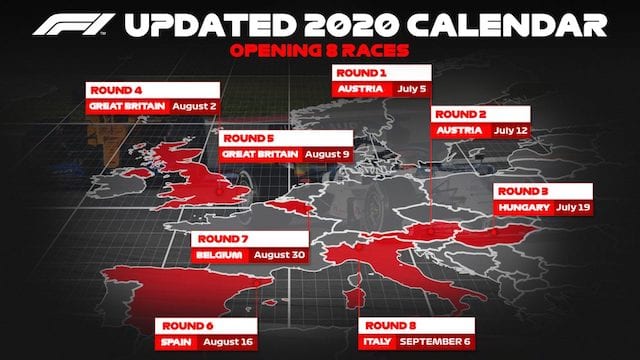 Fans of Formula 1 racing have gotten a boost with the announcement that racing will begin again in early July, with one drawback. For now, there will be no spectators allowed at the tracks.
After the coronavirus ran roughshod over plans and events worldwide, no one was quite sure when, or if, there would be a resumption of fun for 2020.
Happily, Formula 1 racing has decided to give the all-clear and start their season, albeit midstream and with some glaring holes. The Monaco Grand Prix, for example, will not be part of the truncated schedule, mostly due to it being a city race and needing a tremendous amount of planning to make it happen.
In other, less complicated settings, though, the summer season will be somewhat salvaged starting on 3rdJuly when Austria will host back-to-back Grand Prix weekends. This will be quickly followed up the next weekend with a race in Hungary and two weeks later with another two-fer at Silverstone in the UK. The Belgian Grand Prix will be held next and the summer ends in Monza, for the Italian Grand Prix.
None of these races will be held with an audience in attendance, but there is hope.
Chase Carey, Chairman and CEO of Formula 1, made clear that, “While we currently expect the season to commence without fans at our races we hope that over the coming months the situation will allow us to welcome them back once it is safe to do so, but we know the return of Formula 1 will be a welcome boost to sports fans around the world.”
Austria was chosen as the opener for its proximity to a good local airport next to the circuit in a reasonably isolated setting. The Austrians have had less than 700 deaths from the epidemic and no doubt would like to keep it that way.
After that, the plan is still a bit up in the air, though F1 organisers are hoping to have a total of 15 to 18 races completed by the end of the racing season in December. After the summer in Europe, the hope is to go to Asia and the Americas in autumn and finally the Gulf region in December.
Health and safety practices will be in full force, and both Formula 1 and the FIA have detailed plans to ensure races take place with the highest safety standards, including regular check-ups for pilots and pit crews.
Formula 2 and 3 races will also be taking place at these venues, so fans can watch the stars of tomorrow as well.