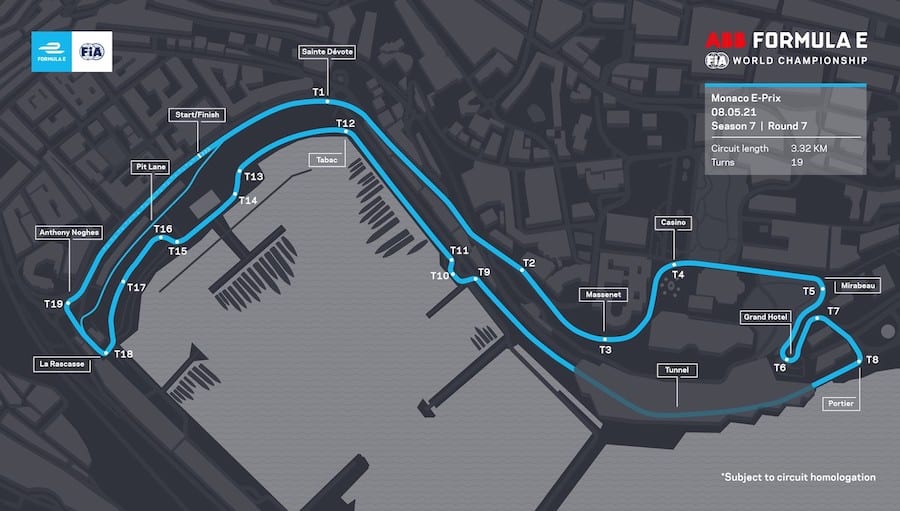 The Monaco E-Prix will for the first time ever utilise the full 3.32-kilometre track layout in its 8th May event thanks to the introduction of a new car whose features have increased performance and range.
This year’s Monaco E-Prix will be one for the history books. Not only will the event go forward in unprecedented pandemic conditions requiring serious people and health- safety management, but it will also be racing the full Monaco Grand Prix track for the first time.
The 3.32-kilometre course will be at the disposal to the E-Prix because of a new Gen2 car which allows LED lights on the halo to light up as cars race through the legendary Monaco tunnel for the first time.
The circuit won’t be exactly the same as for the Formula 1 Grand Prix, though. There will be a change to Sainte Devote, a throwback to the original 1929 design, making the first corner a big right-hander. Turn 11 at the tunnel’s exit will also be slightly modified for the E-Prix.
Formula E chief championship officer Alberto Longo has expressed his delight in the decision, saying, “In many ways, this circuit is made for Formula E – it’s a fast and narrow street circuit which will see plenty of opportunities for overtaking and will really test driver’s energy management with sharp inclines and high-speed sections.
“The FIA and the ACM are allowing us to race around corners steeped in motorsport tradition and we are honoured that Formula E will be creating its own history on 8th May.”
“I’m glad to see the ABB FIA Formula E World Championship back in the Principality,” added FIA President Jean Todt. “It is in the series’ DNA to compete on streets circuits and Monaco is one of the most iconic tracks in the world. This discipline has its own identity, that’s why, together with Formula E and the ACM, we’ve designed a bespoke layout which suits its particularities.”
The Monaco E-Prix has been around since 2015 and is raced every two years.