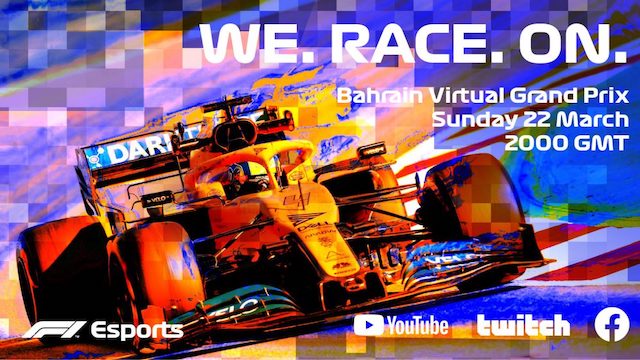 With the cancellation of the Monaco Grand Prix, as well as four other scheduled races this year, Formula One has launched a new F1 Esports Virtual Grand Prix, featuring current F1 drivers alongside a number of other stars.
The Grand Prix racing calendar, like everything else, has been affected by the Covid-19 epidemic. So, to give fans another way to enjoy Formula One racing, they have developed a series that will replace every missed race with a virtual one.
The first virtual race was held on Sunday with the Bahrain Grand Prix. The slightly hectic inaugural race saw a few technical glitches and was cut short but saw Renault’s F2 rising star Guanyu Zhou land in the top spot. Stoffel Vandoorne came in 11 seconds later to nab second leaving Philipp Eng in third.
Short notice left many Formula One stars unable to compete, though Lando Norris and Nicholas Latifi did make it. The fun wasn’t limited to current pilots, and a host of former drivers and outsiders joined in seeing Nico Hulkenberg, Stoffel Vandoorne, Anthony Davidson and Johnny Herbert all competing, while the more well-known names from outside of the sport included Olympian Sir Chris Hoy and former One Direction star Liam Payne.
The technical troubles meant that the race was cut short creating a 14-lap race rather than the scheduled 28, but the excitement was no less felt.
The participants all raced remotely in compliance with health and safety regulations currently in place, and the broadcast was hosted live from the Gfinity Esports Arena and was viewed on the Formula One’s YouTube, Twitch and Facebook channels, as well as on F1.com.
The series is using the official F1 2019 PC video game, created by gaming company Codemasters and has a set of built-in game-levellers, as the gaming skills of each participant vary wildly. Things such as running equal car performances with fixed setups, reduced vehicle damage, and options such as anti-lock braking and traction control were available for those less confident with their game.
On non-race weekends, Formula One will host live exhibition races online, giving fans a chance to go up against real F1 pilots. Details of these events will be available in the coming weeks.
“We are very pleased to be able to bring some light relief in the form of the F1 Esports Virtual GP, in these unpredictable times, as we hope to entertain fans missing the regular sporting action,” said Julian Tan, head of Digital Business Initiatives and Esports. “With every major sports league in the world unable to compete, it is a great time to highlight the benefits of esports and the incredible skill that’s on show.”
The next race will be held in two weeks at Melbourne’s virtual Albert Park track.