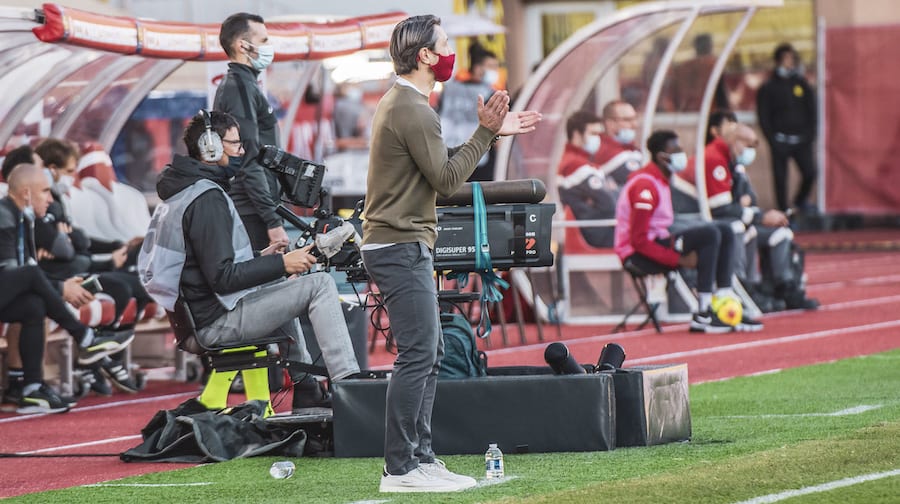 Fresh off their exciting win against number one seeded Paris, Sunday’s 3-0 victory against Nîmes Olympique gives AS Monaco their longest winning streak since the 2016-17 season and puts them firmly in the Top 5 of Ligue 1.
The Red and Whites celebrated their fourth win in a row on Sunday at a home game against Nîmes Olympique where they dominated play and set themselves up as real contenders for this season.
With three goals, one in the first half and two in the second, it seemed nothing could slow them down.
Even the normally reticent Coach Niko Kovac was mostly positive saying, “I am very happy with this 3-0 victory, which in my eyes is totally deserved, because we had a lot of chances in both halves. I was very satisfied after the first half. The start of the second half was a bit tough, but after the red card, we played a lot better. In the future, I would like us to control the match for 90 minutes.”
He went on to note how hard the team has worked to gel, declaring, “It’s true that we have found a real balance in our play. We have been working here for four and a half months, the players adhere to the strategy and integrate the principles as is requested of them. We are also happy with a clean sheet, it’s something important for the defence, the goalkeeper and the team as a whole. I really appreciated the fact that we are getting so many chances. We are really on the right track.”
Sofiane Diop made the opening goal in a nice volley about 19 minutes in that landed the ball at the edge of the nets. In fact, Monaco dominated the ball most of the first half, and though they only converted the once, they were playing well as a team.
After halftime, they came out a bit slower but still strong, and when a red card on Nîmes’s Lucas Deaux for tackling Diop from behind occurred, the Red and Whites also had a one man advantage which they took absolute advantage of.
In a one-two, Gelson Martins made a gorgeous header in the 75th minute followed by Kevin Volland putting it between the posts in the 77th. This sealed the deal and the final score of 3-0 was set in stone.
After the match, team captain Axel Disani said, “We started the match very well, with the goal coming quite early. The coach had told us we had to attack them from the start in the final third of the pitch, and that’s what we did. In the second half, I think we came back less well, Nîmes were pressing more. But when we got down to 11 against 10, we were able to break forward and score the two goals that gave us the victory.”
The Red and Whites next play in an away game in Lille on Sunday, 6th December.