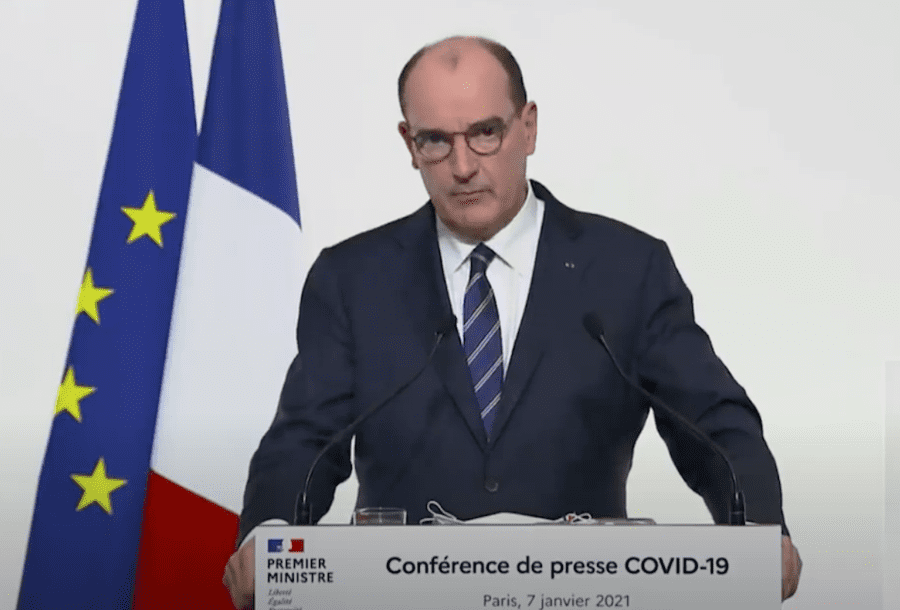 French Prime Minister Jean Castex has said the borders with the UK will remain closed to keep a Covid variant at bay and the vaccination programme will be stepped up with a target of one million inoculations by the end of January.

In his televised speech on Thursday evening, French Prime Minister Jean Castex has announced that borders with the United Kingdom will remain shut “until further notice” due in part to the deteriorating health situation in France and after two clusters of the variant strain of the virus were detected in Paris and Brittany.

At least nine players and a staff member of the Bayonne rugby team tested positive for the variant during a European Challenge match against the Leicester Tigers on 19th December. The news was reported last week after the players were tested ahead of a match on Thursday. Another case was confirmed when a French citizen in Corsica returning from London was found to have it.

The border with the UK has been closed since 20th December, causing havoc at ports just prior to Christmas as lorry drivers were trapped on either side of the Channel with nowhere to go. France and the UK found a solution and now transporters and French and EU citizens are allowed to enter France, but only with a valid negative PCR test taken within 72 hours of entry. Second home-owners, tourists and those visiting family are not permitted to come at present.

Health Minister Olivier Véran said Thursday that labs around the country were tracking the strain.

The government has also vowed to up the vaccination programme, which has seen only 50,000 jabs given since 27th December. France has pre-ordered 200 million doses of the various vaccines. This will more than give blanket coverage to the country’s 67 million inhabitants, with the over 75’s and disabled people in care homes next up for eligibility.

The country will remain under light-lockdown with restaurants, bars, gyms, theatres, cinemas, and cultural institutions remaining closed until “at least” mid-February, whilst ski resorts are looking at closures to persist into the February half-term break.

The nightly curfew will remain in place until at least 20th January with the stricter 6pm to 6am curfew extending to 10 more departments, making the total number under the harsher rules 25, including the Aples-Maritimes.

The government has also warned that additional restrictions could be enacted if the situation does not improve.

“The time has not come to return to normal,” said the PM. “We still admit one person to hospital every seven minutes and one in two people in intensive care are there for Covid-19.”

New cases in France are still topping 20,000 per day, far from the threshold set by the government of 5,000, and until the numbers go down dramatically, the French can expect measures to continue.

Previous articlePhoto exhibition: the importance of scientific research
Next articleVillefranche fort gets €300,000 for renovations
Stephanie Horsman

Local News Stephanie Horsman - March 3, 2021
The Principality has made its next step into the digital transition as the technical installations for super high-speed fibre connectivity has been completed after three years of work.

Local News Stephanie Horsman - October 9, 2020
Students of Monegasque nationality who would like to study European affairs at the College of Europe for the 2021-22 academic school year can now apply directly online.