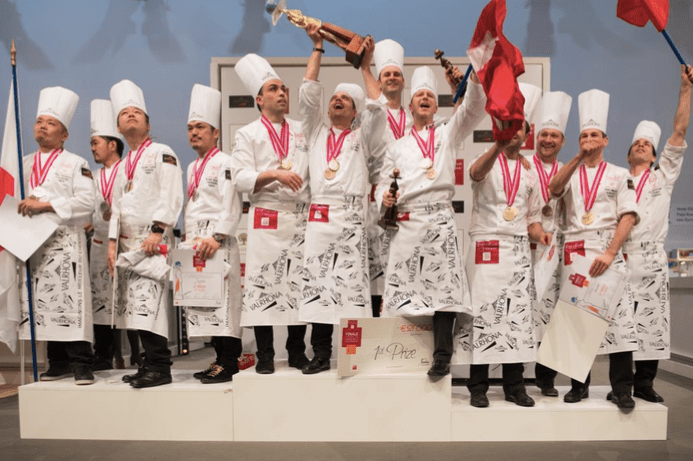 A French team has won the 15th edition of the Coupe de Monde de la Pâtisserie (World Cup in Patisserie), marking the eighth time in a row that France has claimed top prize at the competition.

The biannual contest saw teams from 22 countries compete in a 10-hour event in from of a live audience. Countries selected included Argentina, Denmark, Egypt, Malaysia, Mexico, Morocco, Singapore, Sweden, Taiwan, Tunisia, the UK and the US. Chile, India and Indonesia took part in the contest, which took place in Lyon on January 22 and 23, for the first time this year. Each team is made up of three specialists – a pastry chef, a chocolate maker and an ice-cream specialist.

Rock’n’Roll was the theme, and the French team – composed of Antibois Etienne Leroy, sous chef pâtissier at the Cap-Eden Roc Hotel, Bastien Girard and Jean-Thomas Schneider – rose to the occasion by completing “a flawless run in 10 hours of tests”, creating a guitarist and a drummer made from chocolate and sculpted in sugar. The prize was €21,000. A Japanese trio took second place and Switzerland came third.

Lyon is considered to be the centre of French cuisine.

Photo: Alice Blangero/Monte Carlo Ballets[/caption] "No Time's Land", the first musical comedy involving 53 teachers and 65 students from the Principality of Monaco and the Nice Academy will be held on Friday, December 8, and Saturday, December 9 at the Grimaldi Forum. The performances are part of “Choré-voix”, a training exercise in multidisciplinary artistic practice, organised by the Ballets de Monte-Carlo Educational Unit and its partners. For 16 months, the 118 performers of the troupe have met every week and one weekend a month, at the Atelier des Ballets de Monte-Carlo or within their school, to live, together, a great human and artistic adventure: the creation of a musical. Participants attended intensive multidisciplinary workshops led by professional artists and teachers including, amongst others, Bruno Roque (Dancer-Choreographer at the Ballets de Monte-Carlo), Sandra Monlouis (Choral conductor at CREA), Dominique Dreyfus, Dance Professor, Head of the Monte-Carlo Ballets Educational Unit and Bruno Habert, Choral conductor Rainier III Academy. Also joining the troupe, Patrick Goujon, who intervened in schools for the writing of the booklet of the play, as well as Léa Jade Aumonier and Jovita Negro, young scenographers at ESAP-Pavillon Bosio for the creation of the decor. This educational project is being led jointly by the Ballets de Monte-Carlo, Monaco’s National Education, Youth and Sports Department, the Nice Academy and the Academic Inspection service of the Alpes-Maritimes. It operates in partnership with the Bosio Pavilion, the School of Sculpture of the City of Monaco, the Monaco City Hall, the Rainier III Music Academy, the Monaco Theatre and the city of Beausoleil. Tickets for both shows (Friday 8 pm and Saturday 4 pm) range from €12 to €25 and are available at the Grimaldi Forum box office.