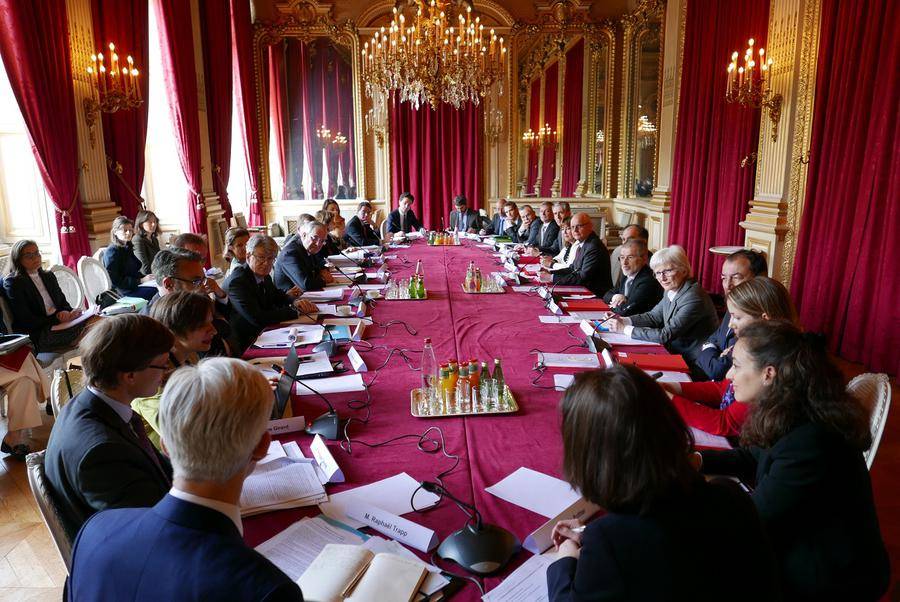 The Commission for Franco-Monegasque Cooperation (CCFM) met in Paris on 1 st April 2019. Established in its current form by the Treaty adapting and confirming the friendship and cooperation relations between the French Republic and the Principality of Monaco, October 24, 2002, this commission is held annually alternately in Paris and Monaco. It provides a framework for regular consultations between the two countries on topics of national interest in the spirit of their “community of destiny”.

The 11th meeting of the CCFM was co-chaired by Mr. Maurice Gourdault-Montagne, General Secretary of the Ministry of European and Foreign Affairs and HE. Mr Serge Telle, Minister of State of the Principality of Monaco.

It was held in the presence of His Exc. Mrs Marine de Carné-Trecesson, Ambassador of France to Monaco, HE Most. Ms Sophie Thevenoux, Ambassador, Head of the Mission of Monaco to the European Union, HE Most. Mr. Christophe Steiner, Ambassador of Monaco in France and the representative of the Prefect of Alpes-Maritimes.

The Monegasque delegation included the members of the Prince’s Government and the collaborators of the ministerial departments concerned. The French delegation consisted of representatives of ministries responsible for monitoring Franco-Monegasque relations.

The agenda included the ongoing negotiation of an association agreement between the Principality of Monaco and the European Union. France and Monaco stressed the need to take into account the specificities of Monaco in the future draft Association Agreement in order to preserve the internal balances of the Principality, as well as their commitment to the respect of a certain number of Franco-European conventions. Monegasques essential to their close cooperation. France reiterated its full support to Monaco for the continuation of these negotiations.

The committee also took note of the reflections carried out within the framework of the local cross-border commission of 11 January 2019 to improve mobility in the Franco-Monegasque basin, in particular the progress of the Beausoleil ramp project and the forthcoming launch of working groups. on housing, telework and sea shuttles.

In terms of health, social security and labor law, Franco-Monegasque cooperation is a key issue.

The committee thus mentioned the coming into force of the two Franco-Monegasque agreements on health security and blood transfusion. The Principality of Monaco has also proposed that its hospital services include medical interns following the French training course as part of “validating” courses.

The Committee also welcomed the forthcoming signing of the Memorandum of Cooperation concerning the granting of the professional health card to Monegasque pharmacists.

In the area of ​​labor law, the difficulties related to the application of the Unemployment Insurance Convention were particularly discussed.

The prospects for a bilateral agreement have been put forward in order to restore the fairness of the rights of the Principality of Monaco’s employees in terms of access to employment aid and the partial activity scheme.

The Commission also discussed the housing conditions of the French people of Monaco.

Transport safety is a common concern. The committee notably tackled the fight against road traffic offenses as well as the safety of the Rainier III tunnel linking the Principality to France. The two countries also welcome the publication of the decree opening the possibility for Monegasque passport holders to benefit from the Rapid Border Crossing (Parafe) scheme.

In the field of education, the committee welcomed the measures adopted by France to prevent Monegasques from paying differentiated university fees in September 2019. The two countries will facilitate the interoperability of their digital applications.

France and the Principality of Monaco, united in the same commitment to environmental issues, spoke about the protection of the oceans and the upcoming deadlines for international negotiations on climate, biodiversity and the Global Environment Pact.

They also spoke about the next ministerial conference of the Francophonie, which will meet in October 2019 in the Principality and will honor the common language of France and the Principality.

The two delegations agreed to hold the next session of the Franco-Monegasque Cooperation Commission in 2020 in Monaco.