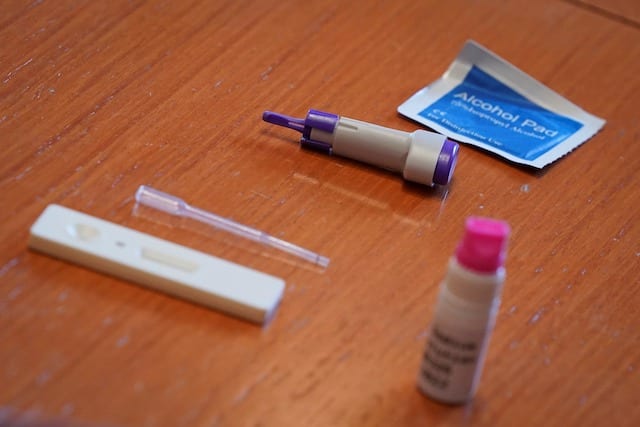 Free Covid-19 blood tests will be rolled out for the entire population on a voluntary basis from Monday, with the aim of testing 90,000 residents and employees.

From 18th May, the government will start blanket testing the population, with 50,000 free tests currently available for residents and employees of the Principality and more than 100,000 additional tests on their way.

The test will be voluntary and conducted at two centres, the Grimaldi Forum and Espace Léo Ferré. Directives will be sent in the post next week and will be regulated in alphabetical order for residents aged five and over.

The so-called TROD serological test consists of a prick on the fingertip, the collection of a drop of blood and its analysis. The result takes just 10 minutes.

If the result is negative, it indicates that the person has not been in contact with the virus. If it is positive, the person will be asked to take a blood test in a laboratory (covered by  the State), to determine more precisely this person’s viral load and when they came across the virus. If this period is less than seven days – the active contamination time – a PCR test will determine if the person is infected with the virus and whether they will need to self-quarantine for 14 days.

After the population screening, tests will be organised for employees within companies that give their consent and on dedicated sites.

Infants and children under the age of five will be screened at a later date, in the presence of a paediatrician.

The test rollout was announced during the 8th meeting of the Joint Monitoring Committee which was held on Thursday, where it was also revealed that lockdown measures have been successful in containing the coronavirus. “To date, more than 700 targeted people who have been exposed have been tested in order to start an epidemiological survey of the Principality,” states a press release. “It turns out that less than 2% have been in contact with the virus. These first figures, which need to be refined, are encouraging. They show that confinement in the Principality has considerably slowed the spread of the virus in Monaco.”

The government noted that since the lockdown was lifted on 4th May, overall consumer attendance is considerably lower in May compared to previous years, given the cancellation of events, cruise ships and the closure of restaurants and cafés.

“According to initial estimates, there is an estimated 60% drop in attendance. This drop is slightly less, for the moment, in stores selling clothing, technology, household appliances, telephones, toys and home care such as hairdressing.”

Beneficiaries of the Extraordinary Minimum Income and Aid to Companies will continue to receive support for the month of May, without having to request it, despite the fact many have resumed activity.

“However, any new request received after 15th May will not be accepted. The Joint Monitoring Committee now wishes to focus on the sectors of activity particularly affected by the crisis, or still subject to administrative closure measures, and which will therefore be the subject of targeted support measures,” said the committee.

With regard to public transport, the SNCF recorded an increase of 1,300 passengers compared to the week of 4th May and figures show the number of commuters is increasing day by day.

Finally, despite pressure from the National Council, the government said it would not make it mandatory for landlords in control of leases of commercial, industrial or artisanal sites to apply discounts or aid measures for tenants. “The Princely Government, anxious to guarantee legal stability, will privilege concertation and analysis of the situation on a case by case basis.”

The next Joint Monitoring Committee meeting will be held on 28th May.

Lifestyle & Wellbeing Cassandra Tanti - May 28, 2021
The joyful sounds of music are set to return to restaurants and cafés under a new easing of restrictions, while the curfew has also been pushed back an hour to 11pm.

Lifestyle & Wellbeing Stephanie Horsman - December 14, 2021
From this Thursday, people aged 65 and over in France will need a third dose of the Covid jab in order to retain their health pass. Here are the details on the next phase of the Covid health crisis.