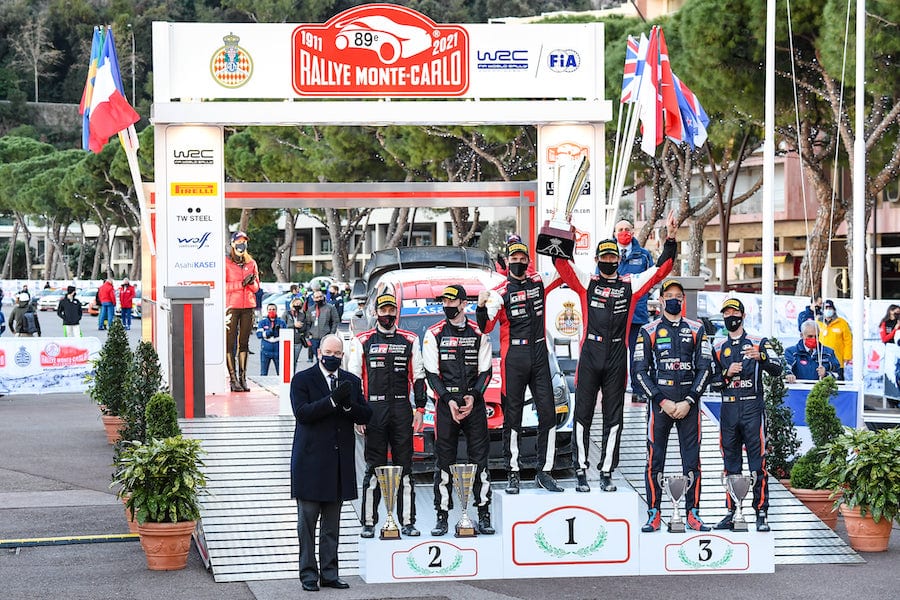 Julien Ingrassia and Sébastien Ogier achieved a record-topping eighth win at the 89th Monte-Carlo Rally this weekend, beating out former record holders Sébastien Loeb and Daniel Elena.
The annual rally ended on Sunday with Frenchmen Sébastien Ogier and Julien Ingrassia taking their eighth victory in their Toyota Yaris WRC, surpassing the record they shared with Sébastien Loeb and Daniel Elena.
The race was not the usual spectacle, as health measure prohibited the public from cheering them on and the course was abridged to comply with rules pertaining to curfews, but the excitement of the race was still felt.
Ogier and Ingrassia came out swinging and won not only the Rally, but also their 50th World Rally Cup victory.
The final standings of the race saw Sébastien Ogier and Julien Ingrassia coming in at 2h56’33”, with fellow Toyota Yaris WRC drivers Elfyn Evans and Scott Martin in second place. The Brits were 32”6 behind the leaders. Belgians Thierry Neuville and Martijn Wydaeghe in their Hyundai i20 Coupé WRC took third coming in 1’13’5 after Ogier and Ingrassia.
Rounding out the top five were Kalle Rovanperä and Jonne Halttunen from Finland in their Toyota Yaris WRC and Spanish drivers Dani Sordo and Carlos Del Barrio in their Hyundai i20 Coupé WRC.
Ogier won his first Rallye Monte-Carlo in 2009, and then from 2014 he won every year until 2019. He was unseated in 2020 by Thierry Neuville in 2020.
Prince Albert presented the award to Sébastien Ogier and Julien Ingrassia on Sunday afternoon.