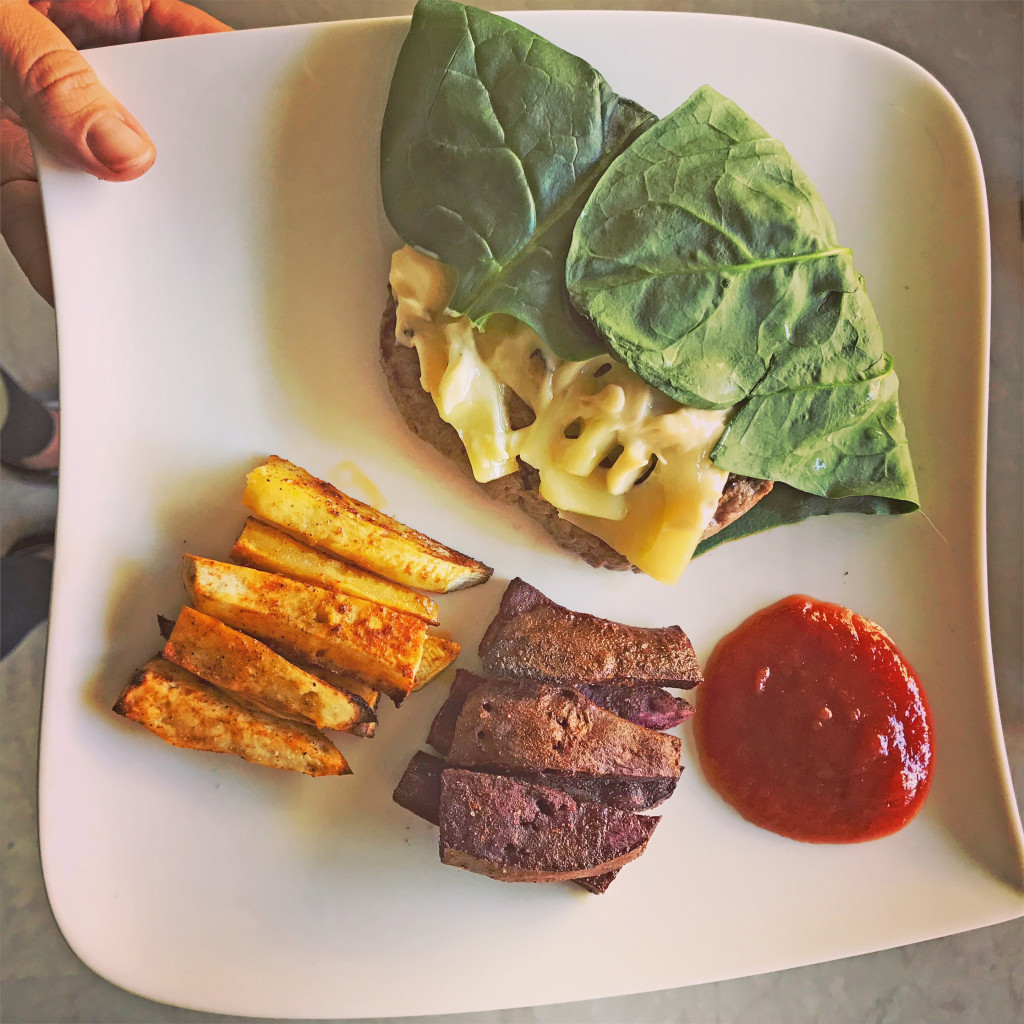 Maddywell’s grassfed beef burger wrapped in spinach leaves and topped with cheese & truffle mayo (definitely not vegan nor healthy but you can leave those out!) sweet potato fries and Natura’s ketchup[/caption] Unless you’ve been out of town for a while, you’ll have probably noticed the ad on the back of Monaco buses promoting €99 fillets reduced from €198 at Beef Bar. Monaco is unique. I’m pretty sure if this same poster was advertised in a different part of the world, the buses would’ve been met by animal rights activists wearing lettuce binkins. The debate on meat remains high on the agenda over the last few years and every time a new documentary is released, there seems to be a surge in the number of people “going vegan”. It’s encouraging that people are becoming more mindful of their meat consumption but veganism isn’t for everyone. And it doesn’t have to be. The majority of vegans will tell you they feel “amazing” since they stopped eating meat and preach that meat is “bad”. And it’s true, some people thrive on a vegan diet but in general terms, the answer is not so simple as meat is good or meat is bad. The quality of the meat is what counts and depending on whether the cow has grazed in an open field or if it was fed with grains and pumped with antibiotics and hormones in a factory, the grade of beef you get out of it will just not be the same. The burger you get at Beef Bar will probably be a little different to the one you get at McDonald’s. It kinda makes sense. So while there are no studies that have been made on the impact of pasture raised beef on our health, what is clear is that the rates of cancer, heart disease, diabetes and obesity have gone through the roof since factory farming industrialised our food system and wreaked havoc on our health. In my work, I try and raise awareness about how to integrate more vegan sources of protein into the diet and to be more mindful of our consumption of animal protein. If you’ve ever eaten at EQvita you’ll know that a vegan meal can be delicious, nutritious and filling all at the same time. Having said that, I think everyone has the right to decide whether they wish to continue eating meat or going vegan. One of the reasons I’ve decided against going completely vegan is because besides EQvita, most restaurants in Monaco and the region mostly cater for meat eaters and I ain’t interested in turning up to a restaurant and eating steamed vegetables or a bowl of fries. French and Italian cuisine are not exactly known for being vegan friendly and it’s very unusual when you dine out at a typical restaurant in the region to find a dish that is vegan, has flavor and is nutritionally balanced. So rather than eating something that is bland or poor from a nutrition standpoint, I’d rather go for a bit of animal protein. I used to be a big meat eater but I reduced my intake considerably in the last couple of years, to the point where I started flirting with veganism. Now I feel really good with a plant based diet 80-90 percent of the time and giving myself the option to eat animal foods when I feel like it. When I opt for meat, I follow the advice below of Dr Mark Hyman, a leading doctor in functional medicine and a lecturer at The Institute for Integrative Nutrition in New York where I studied. 1. Choose grass fed, pasture raised and preferably organic meats. Not the easiest thing to find in Monaco but the butcher at Marché U often has some and so does Formia in the Condamine and Beausoleil markets. They’re more expensive but ideally you will eat less meat and more plant-based foods. You’ll find grass-fed beef on the menu at Beef Bar. 2. Think of meat as a condiment, not a main dish. Fifty to seventy percent of your plate should be filled with vegetables. I would say that this is a good tip to follow for all your meals, not only when you’re eating beef. We are so lucky to have such an amazing array of local and seasonal vegetables in the markets and organic supermarkets in town. 3. Walk over to the Condamine market and ask what’s in season and maybe you’ll discover a new type of vegetable to try out with your fillet. The stallholders are super friendly and will be help you find something that’s in season and is easy to prepare. 4. Avoid all processed meats. These are the meats that the World Health Organization points to that have been proven to cause disease, illness and cancer. I’m not saying you should never ever have that delicious prosciutto from across the border from time to time, but bear in mind that it’s not the best choice for your health if you consume it on a regular basis. 5. Prepare your meat the right way. The way we traditionally cook meat is by grilling, frying, smoking or charring at high temperatures, which leads to the production of toxic compounds called polycyclic aromatic hydrocarbons (PAHs) and heterocyclic amines, which have been shown to cause cancer in animals. Change your cooking methods to reduce your exposure to these toxic compounds by reducing the heat. Focus on lower temperature, slow cooking for meat and apply the same rules for vegetables and grains by baking, roasting, poaching or stewing them. Whatever you decide to eat, enjoy it. Maddy is the Founder of Nutrition For Naughty People, aimed at helping individuals find a better balance between the things that keep them healthy and the things that make them happy! Any questions? mk@nutritionfornaughtypeople.com. Article first published November 23, 2017.

Local News Staff Writer - July 29, 2018
The busiest weekend of the year was worsened on the evening of Saturday, when a truck fire near Arcs-sur-Argens forced drivers to choose other routes.