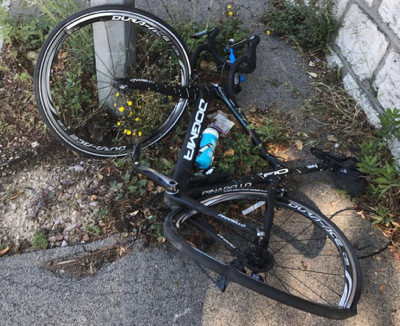 Cycling champion Chris Froome escaped uninjured on Tuesday morning after a motorist slammed into his bike on a narrow street in Beausoleil. The Monaco resident said the driver had deliberately rammed him. He described his bike as being “totalled” in the incident.

The three-time Tour de France winner posted a photo of his bike on Twitter. The 31- year-old is due to take on the Tour de France again in July in an attempt at a third consecutive victory. He first won the prestigious title in 2013.

The driver failed to stop. Froome wrote on Twitter: “Just got rammed on purpose by an impatient driver who followed me onto the pavement! Thankfully I’m okay. Bike totalled. Driver kept going!”

By Tuesday evening, he added to his social media account: “Pretty scary experience today. The French police have been brilliant, I have given them all the details. Just grateful I wasn’t hurt …Thank you for all the messages of support. New bike flying in tonight.
Back to training tomorrow.”

The Tour de France starts on July 1, with a departure from the German city of Dusseldorf.  The first two stages of the race take place outside of France.

The Tour will end on Sunday, July 23, with the final stage ending on the Champs Elysees in Paris. Froome is attempting to become the fifth cyclist to win the Tour de France four times, following Jacques Anquetil, Eddy Merckx, Bernard Hinault and Miguel Indurain.

Fans of AS Monaco basketball got what they paid for on Saturday night with a solid win against Pau-Orthez on their home turf at Gaston Médecin.

Sports Staff Writer - August 2, 2018
The 22nd Rallye Monte-Carlo Historique has been set for January 30-February 6, 2019, and has added Milan and Athens to its roster of starting cities.