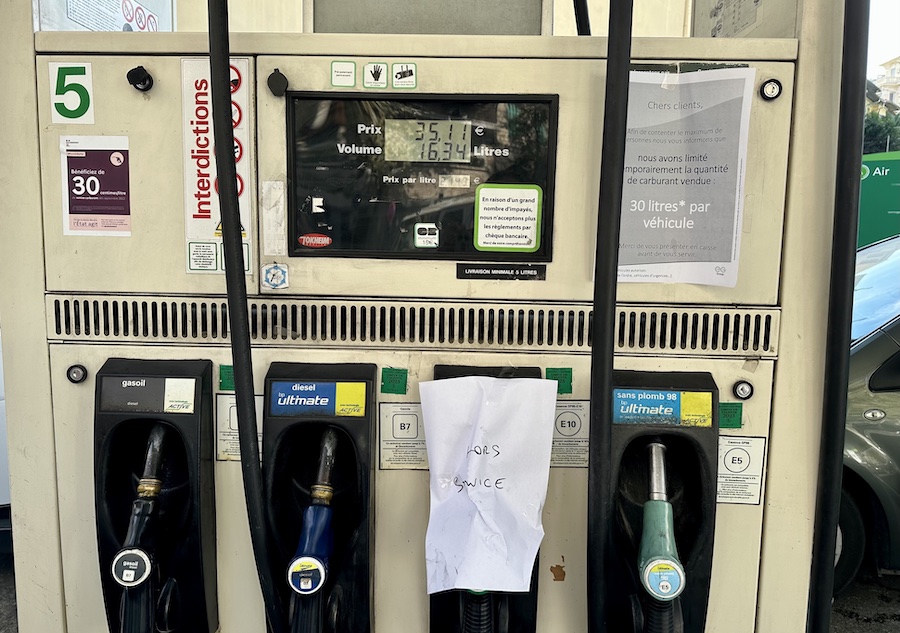 As long queues and caps on fuel purchases are imposed at some local petrol stations, the union representing fuel company employees has rejected two offers on the table, calling instead for the strike to be extended to the entire energy sector.

Oil and gas behemoth TotalEnergies has the eyes of all France aimed in their direction. A crippling strike by the company’s refinery workers has brought the country to its knees, with consumers bearing the brunt of the inconvenience.

The French situation has spilled over into Monaco, where local service stations are doing what they can to make supplies last in the face of uncertainties about when the next shipments of petrol will arrive.

The Esso station on Avenue des Castelans is limiting customers to purchases of €25, with a slightly higher cap for companies. The station, whose queues seem endless, is working on a one-day-at-a-time basis, as they are kept as clueless on fuel deliveries as the customers themselves.

Pitstop Monte-Carlo is also seeing massive lines, but they were not limiting purchases. “We were delivered on Friday,” Clivio Piccione, the station’s manager, told Monaco Matin. “Since the opening at 7am this morning, there has been a constant queue. For the moment we have everything, but it remains to be seen whether we will receive a delivery tomorrow (Thursday).”

As instructed by the French Government, TotalEnergies has tried to negotiate with the CGT union, proposing a 6% pay increase for French employees in 2023, and a one-off bonus for workers worldwide in December, equalling a month’s salary, “subject to salary agreements”.

But CGT leader Philippe Martinez publicly rejected the offer, saying, “A negotiation is not an announcement from the CEO. In a negotiation, we put ourselves around a table and we discuss.”

The union is calling for a 10% pay increase.

The government warned that it would step in if necessary and requisition personnel, which it did on Thursday at the Dunkirk and Flanders depots.

It has also told TotalEnergies to raise wages as the oil firm’s two-week standoff with striking workers, which has sapped the country’s petrol supplies, drags on.

Oil depot and refinery strikes have reduced France’s petrol output by more than 60% and left one in three petrol stations struggling for fuel. They have spread this week to other energy companies, including nuclear power group EDF