Full steam ahead at Silversea Cruises

Full steam ahead at Silversea Cruises 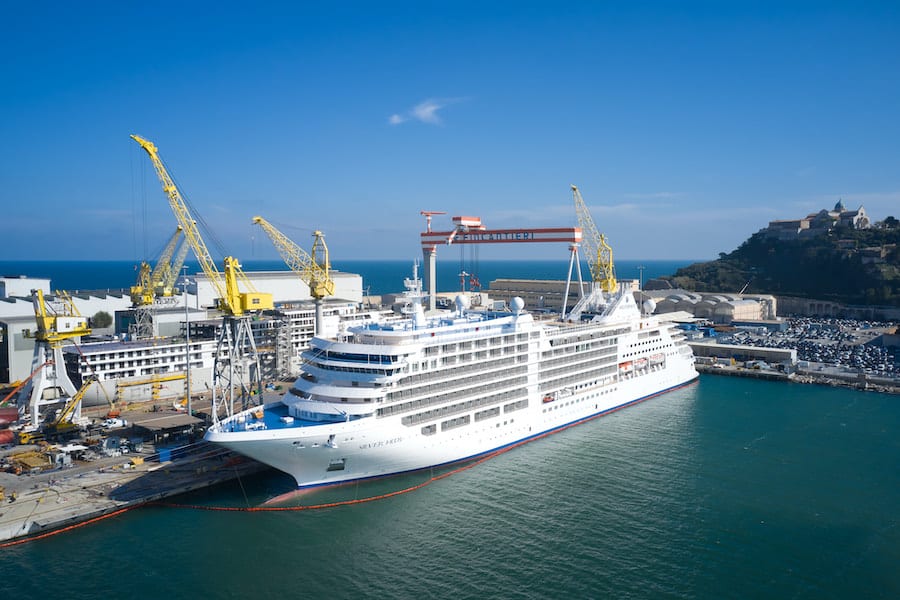 Silversea Cruises, the super-luxury cruise line based in Monaco, has taken delivery of Silver Moon – the ninth vessel in its fleet. Meanwhile, Silver Dawn is set to be delivered in 2021, showing confidence that the cruise sector will bounce back after an incredibly bad year.
Silver Moon is the newest ship to be added to the Silversea fleet and was delivered on 30th October in an intimate ceremony held at the Fincantieri shipyard in Ancona, Italy, where the vessel was constructed.
Executives from Silversea Cruises, the Royal Caribbean Group, and Fincantieri gave live speeches via video feed. Richard D. Fain, Chairman and CEO of the Royal Caribbean Group, and Jason Liberty, Executive Vice President and CFO of the Royal Caribbean Group, praised the 1,000-plus craftspeople who contributed to the build’s success. In Ancona, Luigi Matarazzo, Fincantieri’s General Manager of the Merchant Ships Division, and Roberto Martinoli, Silversea’s President and CEO, both spoke to attendees, before Martinoli offered his signature to officially take delivery of the ship.
“I congratulate all those involved in the build of Silver Moon; it is a proud moment for everybody at Silversea Cruises, the Royal Caribbean Group, and Fincantieri,” said Richard D. Fain, Chairman and CEO of the Royal Caribbean Group. “This beautiful ship represents the resilience of the global cruise industry and it is encouraging to see such innovation and progress in this challenging period. I have long said that Silversea Cruises is the jewel in the crown of the Royal Caribbean Group, and I am today reminded of the cruise line’s quality.”
The new ship, which can accommodate 596 guests, is completely top-shelf. Eight restaurants serving a variety of cuisines are available and guests enjoy large suites with one of the industry’s highest space-to-guest ratio. For those looking for a truly exceptional experience, there are 10 premium suites which have a dedicated butler, 24/7 in-suite bar and dining, and other high-end amenities.
Fincantieri is the largest shipbuilding company in Europe and the fourth biggest in the world. Sliver Moon is the third ship to be built for Silverseas at the location.