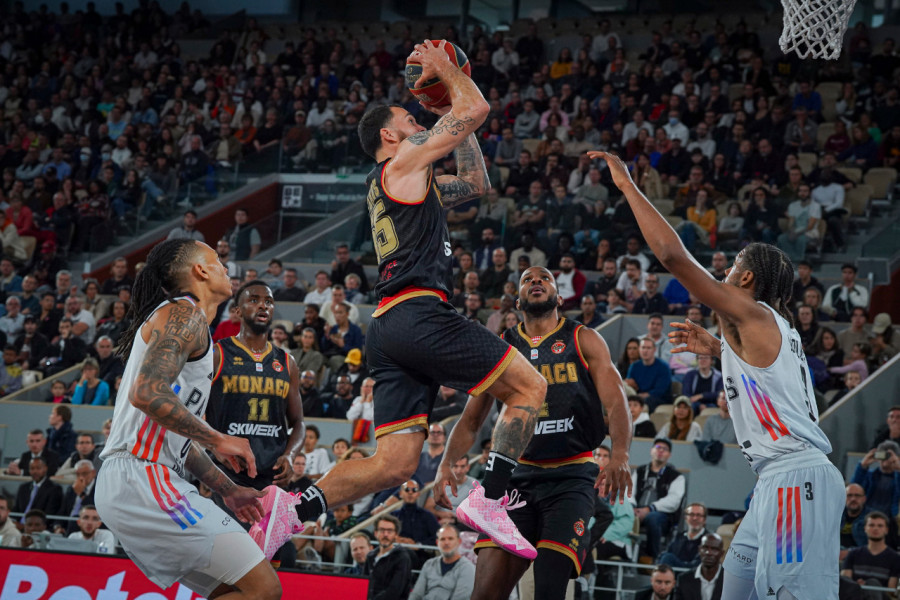 AS Monaco Basketball beat Paris (91-95) on a historic night in the French capital, as Roland Garros traded tennis for basketball for the first time since 1947.

The Roca Team have an air of invincibility. Victory against Paris on Sunday gave them the outright lead of the Betclic Elite and continued a winning run that has now stretched to seven matches.

In a game that went down to the wire, the contributions of Mike James (29) and Adrien Moerman (17) were pivotal, the latter’s incredible proficiency from outside the key was worth 15 points alone on the day.

Led by the returning Juhann Begarin (28), Paris took the ascendency in the early stages to finish the first quarter on top (16-10), before extending that lead further by the midway point of the second (28-18).

The Roca Team clawed themselves back, registering 10 points unreplied to restore parity (28-28). Matching each other blow-for-blow, only a single point separated the sides at the break (39-40).

Monaco began to flex their muscles in the secon-half of the encounter with James, as so often is the case, leading the charge. His 29 points, nine assists and seven rebounds were the difference.

Having managed to create only a minor buffer between the two sides, it was evident that this game would be decided in ‘money time.’ At 90-91, Axel Toupane missed the chance to give Paris the lead with just 1:20 on the clock. Down the other end, James made no mistake, earning a foul before dispatching the two free throws (90-93). Fittingly, James completed the scoring with a two-pointer; game, set, and match for Monaco, who claim victory in the home of French tennis.

Ahead of a difficult week, which will see the Roca Team compete in two Euroleague away fixtures, Sasa Obradović’s men have got off to the ideal start. “We know we’re going to have a very difficult week. We’re leaving for Maccabi (Isreal) on Monday and then we have Panathanikos after that. It’s true that it’s a tricky week for us,” said captain Moerman.