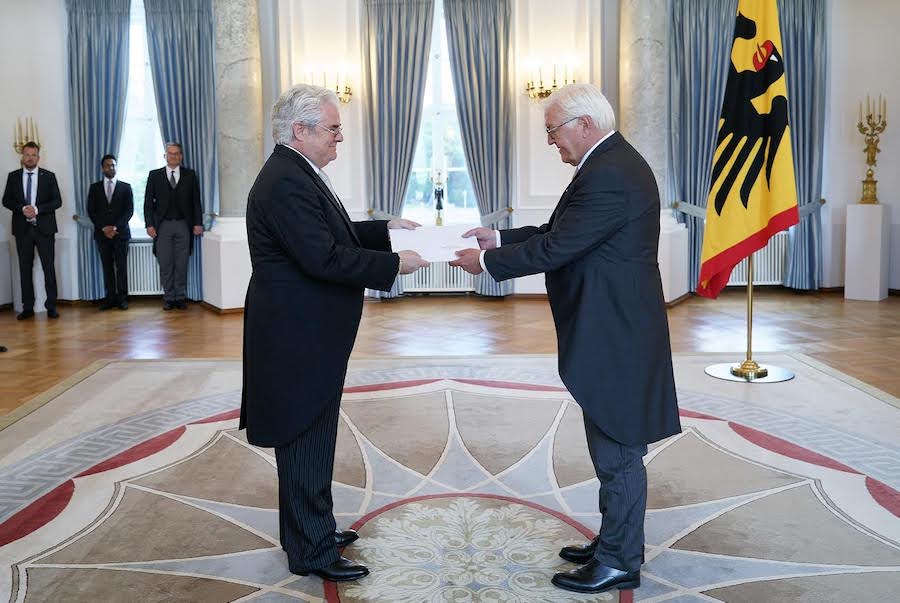 Letters of Credence were presented by Monaco Ambassador Lorenzo Ravano to Frank-Walter Steinmeier, the President of Germany, last week at a ceremony held at the Château de Bellevue in Berlin.

The President and the Ambassador held a private concours after the ceremony, where it was reported the two men spoke about Europe and specifically the conflict in Ukraine and its reverberative effects throughout the continent and the world.

Ambassador Ravano assured President Steinmeier of Prince Albert II’s decisive condemnation of the aggressions against Ukraine and reminded him of the Prince’s calls for a both ceasefire and respect for international law.

The two spoke of Monaco’s actions thus far, including sanctions and, through the works of local humanitarian organisations, the supplying of equipment to the war-torn nation as well as by welcoming several refugee families to the Principality.

The German President praised Prince Albert’s ongoing commitment to protecting the environment, notably through his tireless work on ocean preservation. Ravano brought up the conference held last May, ‘Northbound – Connected by the Sea’, to highlight the Frisian culture and the convergences between the Mediterranean and the North Sea, as well as the Prince’s forthcoming participation in the 15th International Coral Reef Symposium in Bremen.

Finally, the President and the Ambassador discussed their wish to strengthen bilateral relations and cooperation in the diplomatic, economic and cultural fields. Ravano spelled out some synergistic areas, in particular within the framework of public digital transition policies implemented in the Principality through the Extended Monaco Programme, and with the festivities linked to the 50th anniversary of the creation of the German International Club of Monaco, which will take place in 2023.

Lorenzo Ravano is the 7th Ambassador of the Principality of Monaco to the Federal Republic of Germany.