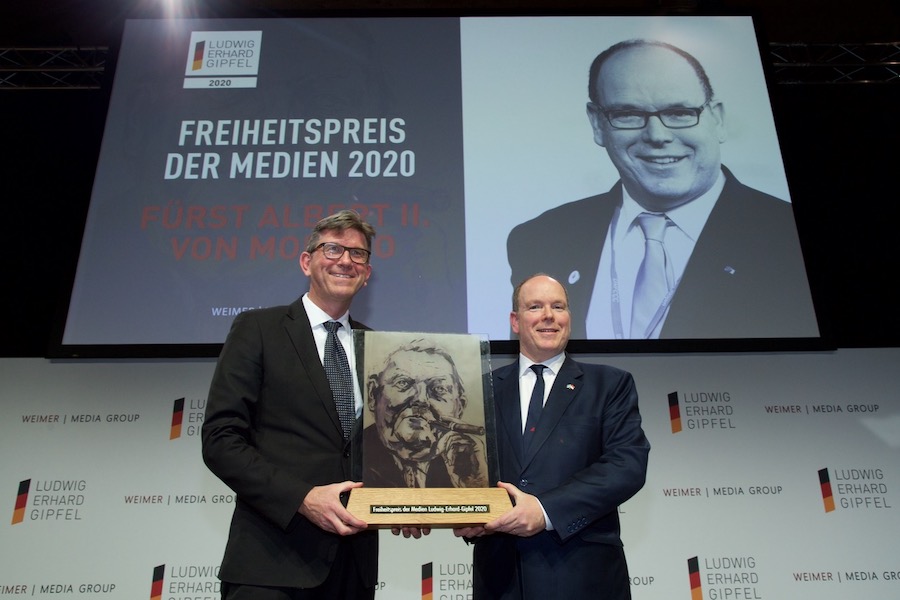 Prince Albert II has been awarded the German ‘Press Freedom Prize’ in recognition of his commitment to the protection of the environment.

Prince Albert travelled to the Ludwig Erhard Summit in Tegernsee on 17th January where he received the Freiheitsprise der Medien – Press Freedom Prize. Organised by the Weimer Media Group (WMG), the event honours public figures who are committed to freedom of expression, and rewarded Monaco’s Sovereign Prince for his decisive role in favour of Nature.

“Prince Albert II has engaged in the preservation of nature more than any head of state in recent years,” Thomas F. Hofmann, President of the Technical University of Munich, said in his speech.

The prize acknowledges the Prince’s action, notably through his foundation, in working “not only against pollution of the Ocean, against global warming caused by industrial emissions, or even against melting ice in the polar regions, but which also continually draws our attention to the protection of biodiversity, the promotion of renewable energies and access to water,” said Thomas F. Hofmann. “The Prince Albert II of Monaco Foundation, which he created in 2006, is considered worldwide as a flagship initiative for the preservation of the environment. These numerous initiatives and successes have made you today a respected international figure in the fight for environmental protection.”

In accepting the award, Prince Albert spoke of the close link which unites the protection of our Planet and freedom of the press, saying: “at the heart of the environmental fight there is indeed a requirement of truth, a truth which is first of all scientific and which must reach us, even if it disturbs in the need for change, which it highlights. This is why freedom of information, in the field of the environment, is a requirement, but it can also be a struggle, a fight based on this freedom of the media but which must also mobilise each one of us.”

Festival for the Earth brings together experts...

Artists Ryuichi Sakamoto and Giuseppe La Spada. Photo: Facebook Festival for the Earth[/caption] The Oceanographic Museum will host the second edition of the Festival for the Earth, an international conference free to the public on November 9 and 10. After a successful first edition held at Ca’ Foscari University in Venice, the 2017 Festival for the Earth will be held in partnership with the Prince Albert II of Monaco Foundation and benefit from global contributions by environmental scientists and economists, green entrepreneurs, as well as from communications specialists committed to increasing general awareness on climate change issues. Pulitzer Prize winner Kenneth Weiss will give the keynote speech on Altered Oceans and Professor Carlo Carraro, an Environmental Economics specialist at Ca’ Foscari University and member of the Bureau of the Nobel Laureate Intergovernmental Panel on Climate Change, will explain the size of investments necessary to govern the transition to a low carbon economy. As part of her vision to find achievable models for responsible living, Festival of the Earth Founder and Curator Maria Rebecca Ballestra includes in this edition art-based projects for social transformation on the subject of water, which will show a video message from award-winning Japanese musician and artist Ryuichi Sakamoto, and an interactive water installation by Italy’s Giuseppe La Spada. Other artistic contributions include a projection of the short film “Amazonia” written by UK eco-poet Mario Petrucci and the documentary “Iriria: Nina Tierra” by Carmelo Camilli of Italy, both of which will be presented during a special event organised by the associatiohn Dante Alighieri Monaco. The conference starts at 11 am on Thursday. For more on free ticket information and speakers bio, visit Festival of the Earth's website.